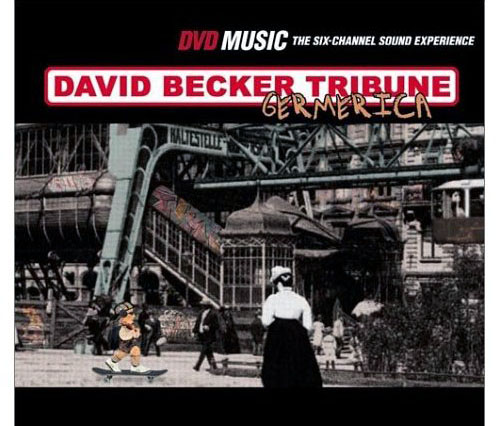 The David Becker Tribune has been acclaimed worldwide, largely because of their exemplary live performances and also because of the talents of individual members who are amongst the finest exponents of original, contemporary jazz around today. They’ve played the world over, from London’s Barbican Centre to the Jazz Philharmonie in St. Petersburg. You can learn more at: http://www.davidbeckertribune.com/

The ensemble has a clear driving force however, in the form of David Becker himself. In fact, ‘Germerica’ is more of a solo project featuring guest artists (members of the Tribune) than it is a group effort. In some cases, such as the disc’s opening and closing tracks he plays all the instruments involved. Likewise the entire contents of ‘Germerica’ was written and produced by Becker, with the occasional assistance of Mark Shulman, drummer Bruce Becker and recording engineer Tim Buktu. Yes, that really is the guy’s name, I wonder if his girlfriend is Constance Inople?

‘Germerica’ was largely inspired by Becker’s time in Germany and his realisation that the entire country is becoming increasingly westernised since the fall of the Berlin wall. The name ‘Germerica’ is a conglomeration of ‘Germany’ and ‘America’, although I’m sure that an explanation wasn’t actually needed.

The overriding theme of the piece is fluid, rhythmic jazz with percussive overtones and the odd smattering of the blues. Indeed, the album features Becker’s first blues recording, ‘Blues for Albie’, a track named in honour of Albie Donnellly, a well-known German saxophonist. There are also hints of more unusual fusion styles, including the hip-hop influences of ‘The Bus Song’ and the funk of ‘Freebahn’, albeit of a subtle nature. For those who aren’t fond of freeform or improvised jazz, ‘Germerica’ should not hold any fears, Becker really only drifts off once, midway through ‘Around the Universe’, otherwise his distinctive acoustic and electric guitar style remains tuneful throughout.

It’s hard to summarise the musical tone of ‘Germerica’ since so many different moods are present. The album opens with the rhythmic ‘Around the Universe’, with what follows varying from the eerie ‘The Truth Lies Within’ – my favourite piece – to the relaxed jazz ballad that is ‘I Wish I Knew’, a track that Becker himself describes as “sombre”. For those who enjoy complex and unusual rhythms, ‘Germerica’ is unlikely to disappoint, especially as the album makes prominent use of drums and percussion. There are unusual elements too, such as that of a guitar with a business card strategically placed between the strings being struck by Becker’s knuckles.

In fidelity terms the recording is a little hit and miss although largely it’s a hit. Some tracks are outstanding, most notably ‘The Truth Lies Within’ which begins with a dynamic bass-line and drum accompaniment, then develops to include enveloping strings and synthesised, somewhat stylised vocal chords. At one stage guitars are positioned left and right, the lead guitar anchored in the phantom centre position whilst a more subtle guitar riff seems to float around one’s room as if suspended in space.

‘Tchickis’, the closing track which carries the nickname of Becker’s girlfriend, is another stand-out recording, Becker’s signature guitar is conveyed with a great sense of presence, as are the excited percussive elements.

There are less convincing elements however, occasionally bass-lines can appear somewhat dull – that of ‘Come In and Find’ being a prime example – and cymbal crashes just a smidgen on the brittle side. The low-point of ‘Germerica’ from a fidelity standpoint is undoubtedly the title track itself; the otherwise enveloping soundstage is thrown forward and the entire track lacks any dynamic edge, especially when one concentrates on the bass and drum elements.

Gary Lux’ surround mix could best be described as ‘subtle’, there really aren’t any obviously discrete surround or centre events, instead those three channels are largely used to wrap a convincing acoustic space around the listener and provide a gentle blend between the front left and right channels. 5.1 Entertainment are usually a little more adventurous and the album opens with a piece that does indeed place a discrete percussive element into the centre channel, but the three dimensional soundfield created is enveloping and especially suitable for the material.

The disc contains three audio formats, the Meridian Lossless Packing (MLP) layer upon which the majority of this review is based, alongside two lossy formats to retain DVD-Video compatibility; Dolby Digital at 448kb/s and DTS. It’s here that things begin to get really interesting…

When one compares the front left/right, centre and surround channels, all three formats sound pretty much alike, although the MLP track has marginally superior dynamics and is able to convey a heightened sense of presence while the DTS is a tad louder. However, there is something patently ‘different’ about the DTS track when one includes the LFE channel; there appears to be significantly more bass. The channel doesn’t appear to be louder, but the bass is deeper and more defined. How could this be, surely the MLP soundtrack should have the superior fidelity?

If one listens to the LFE track in isolation, it quickly becomes apparent that although there are minor level discrepancies, the Dolby Digital and MLP LFE channel content is for all intents and purposes, identical. Conversely, the DTS LFE channel sounds quite unique. Although it’s at approximately the same average level as the Dolby Digital and MLP alternatives, the upper end of its range is rolled off quite significantly (one can hear less of the tonal changes of the bass guitars for example) which means that by bringing the whole up to the same level as that of the Dolby Digital and MLP LFE, the lower frequencies are unavoidably boosted, hence the misleading impression of ‘superior’ bass performance.

I checked with Gary Lux, Vice President of Audio Production at 5.1 Entertainment Group to ascertain whether or not the DTS mix had been “artistically” altered, but this turns out not to be the case, the MLP, Dolby Digital and DTS tracks were encoded from the same master tape in-house by 5.1 Entertainment.

Therefore, the DTS LFE track of ‘Germerica‘ provides yet more compelling evidence of the DTS encoder limitations published by a number of independent sources, especially as both Dolby Digital and DTS can be compared directly to the loss-less MLP. High Fidelity Review’s own frequency response plots are available on-line here.

When we turn our attention to disc extras, ‘Germerica’ boasts an impressive collection. There are run-of-the-mill supplementary materials such as a complete Silverline DVD-Audio catalogue and their standard multi-channel music set-up guide, but there are also more interesting disc specific chapters. You’ll find a ‘Bus Song’ music video (3/2.1 Dolby Digital only) which features all manner of German and American public transport and best of all, a fascinating running commentary in either English or German by David Becker himself (two-channel PCM), wherein he describes the artistic development of each piece. To top this all off, there is a natty set of animated menu screens and slideshow quotes from Becker to accompany each track, although their rotation was at times somewhat erratic on both my Toshiba and Meridian machines.

Hats off to Silverline for another progressive DVD-Audio release, and to the David Becker Tribune for their mastery of contemporary jazz. Although the recording could be considered a tad below par at times, that is not to say that those odd occasions detract in any way from the performance on offer and artistry of the production, both of which are reason enough for this title to be added to your collection. 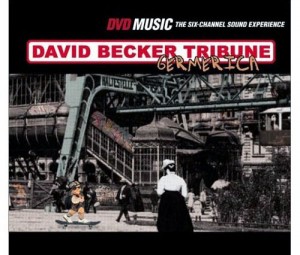 Frequency response plots generated from the LFE channel of the three available audio formats upon the Silverline DVD-Audio disc ‘Germerica’. The entire length of the title track was captured and then analysed using a Blackmann-Harris profile with 65536 FFT size, a 120dB range in relation to a -50dB reference point.

The similarities between Dolby Digital and MLP are obvious, whereas the DTS LFE track differs considerably. There is more low frequency content (for an unknown reason) whereas the higher end of the LFE rolls of far sooner than expected, which is a known DTS encoder characteristic.

All three formats on this disc were encoded from the same master by the same staff at 5.1 Entertainment (independently verified by High Fidelity Review).