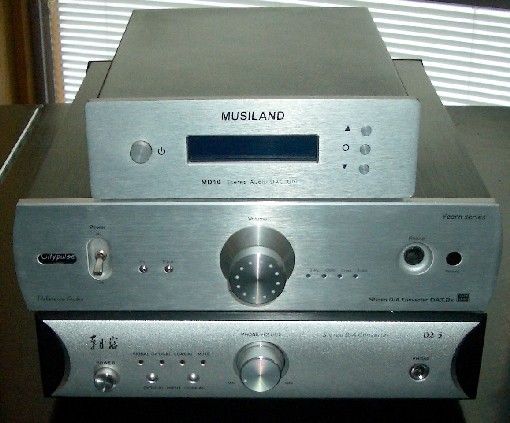 Being an audiophile certainly has its joys, but the hobby also comes with its share of frustrations. I am sure many of you have made the mistakeof talking to a friend or family member about your system, and instead of focusing only on the music (as you probably should have), you tried to walk them through the various components. Most of the pieces might appear sensible enough to the uninitiated. Speakers, amplifiers…blah blah blah. As long as you stayed away from a discussion of the aftermarket power cords, you should escape unscathed, right?

No. Try to explain a benefit of an external DAC to someone who is just pretending to be interested in your hobby. Instead of connecting the computer/CD player/music server directly to the amplifier (which of course, you can do), you first run the signal to this little box over here (after buying additional jewelry…er, cables), and that makes everything sound better! Even if your victim is paying close attention, you run the risk of him or her noticing that the computer/CD player/music server has its own DAC! Yes, but an external one is usually better, right?

I certainly think so. Despite the debates that rage in audio forms (presumably populated by enthusiasts/converts instead of incredulous friends and relatives of audiophiles), most of us agree that a $250 external DAC can usually provide a substantial improvement in sound quality when connected to the digital output of a computer, budget DVD player, or music streaming device (Squeezebox or Sonos or similar). Even older CD players (or transports to us audio hobbyists) can be given new life by using a good external DAC, saving the trouble and expense of replacing the entire player.

Modifying CD players with replacement parts used to be quite popular before these inexpensive outboard DACs became so common. However, rejuvenating old CD players is not the primary reason why the DAC segment of the audio marketplace is red hot right now. Instead, it has been fueled by the emergence of good music serving hardware and software. Perhaps even more interesting than the DAC market itself is a subcategory of DAC that is becoming increasingly popular. DAC/preamp combinations that add a volume control (and possibility input switching) to the party make for a real revolution. Allowing the user to bridge the gap between digital sources and a poweramp buys tremendous flexibility, and can be a really inexpensive way to build a very musical system.

And that brings us to this mini-shootout between three similarly priced, similarly endowed DACs; the Zhaolu D2.5 (it is apparently pronounced “Chow-loo”), the CityPulse 7.2X, and the Musiland MD-10 (previously reviewed by A$$A’s Mark Marcantonio in issue 29 last May). All three units upsample, accommodate multiple digital inputs and provide both line-level and variable analogue output to headphones and power amplifiers, effectively making them DAC/ preamp (or more accurately but less colloquially, DAC/linestage) combinations. All three of the little boxes hail from China, all three are available in North America through on-line retailers, and all three are also readily available on eBay directly from China.

For the purposes of the shootout, I started with my Logitech Squeezebox networked music streaming device connected directly (that is, using its own DAC, a 24-bit Burr-Brown PCM1748) to my Jungson WG-Pre1 preamp and Jungson WG-200 poweramp combination, driving Usher Be-718 speakers. I used four test tracks, three of which are loved by both of my preschool children:

Yes, it is the fourth one that they hate. Jazz trumpet is not for everyone, but neither is techno I suppose.

I connected all three DACs (one at a time, of course!) to the coax digital output of my Logitech Squeezebox (bypassing its own internal DAC and volume control) and left the rest of the system unchanged. In all three cases, adding an external DAC produced an obvious and dramatic improvement to the sound of the system, with the most obvious gains in areas of dynamic contrasts and image width. Here is how the three contenders fared: 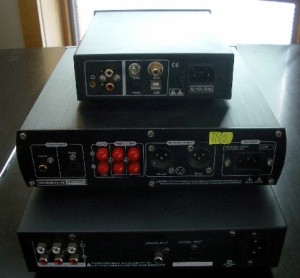 This is the least expensive DAC of the three, but is it also “cheap” ? There are some obvious signs of cost-cutting when examined next to its peers. The volume control feels cheap, and there are certainly some channel imbalances at lower volumes. The unit also has fewer inputs and outputs than its competitors.

Listening impressions: Wow. $250 can really buy a lot of sound here. I have heard $1000 CD players that did not sound this good (such as the Shanling CDT-100). Overall, this is a very dynamic little box. It has quite a forward sound, but perhaps the weakest bass of the lot. Comparing its quoted specifications to the other contenders, the lack of bass extension becomes more credible, not that my system (never mind my ears) can handle anything below 20Hz. Image width was pretty good, but image depth was quite shallow. The energy and resolution of Infected Mushroom’s “Suliman” was most obvious through the Zhaolu, which seemed to thrive on more bombastic material. Overall though, this unit performs quite admirably, especially for the price.

This DAC makes the best first impression. It is the largest, heaviest (by a factor of 2), and best finished of the three (real aluminum casework and a 6mm faceplate). It is also the best equipped. Not only does it have a nice little metal remote control, but it accepts an analog input, making it a legitimate preamp/linestage replacement if you can get by with only one analog source. Also unlike the other two DACs, it sports balanced/XLR outputs, although these are not modulated by the volume control. Despite the very positive first impression, the Citypulse offers a less stellar “second impression”. Closer examination of the case reveals that the red RCA jacks are labelled “L” and the white ones wear the “R”. Which channel is right? I went with the color instead of the letter, and guessed correctly.

Listening impressions: This is one smooth operator. Easily the “least offensive” of the bunch, the CityPulse reminds me most of the sound of a tubed unit, and yet there are no tubes to be found inside (I know for sure, I looked). Strangely, I liked the sound from the RCA outputs better than that from the XLR outputs, perhaps in part due to the higher level output from the RCAs. Female voices had more body and palpability through the Citypulse than the Zhaolu or Musiland, and the Citypulse also produced a wider and deeper image than the Zhaolu (although not by much). Dynamic contrasts were less obvious through the Citypulse than either of the other DACs, but it also sported the lowest noise floor (by the way, this finding is at odds with the published specifications of the CityPulse versus the Musiland or Zhaolu).

This is the smallest and least imposing of the three DACs, Despite its small stature, it still contains a “real” power supply (not just a wal-wart), and it is the only one of the three with a USB input. Also unlike the other two DACs, it does not have a volume knob, but “up” and “down” pushbuttons instead. Personally, I found the ergonomics of this arrangement to be quite annoying, and I would much prefer a good volume knob. I did appreciate the precision of the digital volume control though, and the little LCD display looked just fabulous, in addition to providing information about sample rates and other numbers that I ignored. 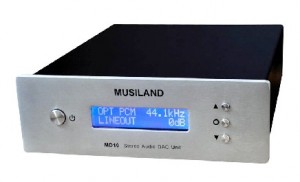 Listening impressions: The smallest DAC in the bunch sounds the biggest. It runs hot -well, warm anyway, and its output level (with the volume control set to “0”) is the highest of the group. It throws out a very wide, if not particularly deep soundstage. The bass is fantastic without a hint of bloat, and its resolution of texture and nuance (especially in the techno sample track) was unrivaled by the other two DACs in this comparison. In almost every circumstance, it was the best sounding of the three. There were some harsh moments (especially during the Infected Mushroom track, and a couple of the guitar notes in the James Taylor piece) that certainly sounded smoother through the Citypulse (and Zhalou for that matter), but overall, the Musiland sounded best. Although not as feature-laden as the Citypulse (no analog input, no remote control, no XLR output), it also costs a bit less.

In a simple world, the choice is simple. As a line-level DAC, the Musiland sounds the best to my ears. However, the world is not a simple place. The Citypulse is certainly the best equipped unit, and given its ability to accept an analog input and offer remote-controlled volume and input switching, this unit is certainly the Swiss Army knife of the lot. It it had a USB input, it would be a no-brainer. Just for fun, I used it in another system as DAC and preamp running directly into a pair of monoblocks, and it sounded great! Ergonomically, it is also far superior to the Musiland. And let’s not forget about the Zhaolu. Like the Citypulse, it also offers RCA analog inputs and a volume knob (without the remote), offering considerable versatility and remarkable sound for the price. No, it does not quite offer the features or performance of the other two units, but it also does not ask you to pay for them. Any of the three DACs offer great value and performance, and the one you chose should depend on your budget and associated equipment.

from aﬀordableaudio, By Lorin Elias