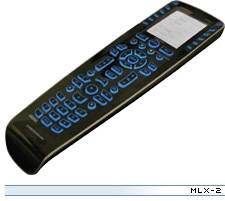 Crestron Versatile MLX-02 Remote is a unique and user friendly device just perfect to address your exact requirements and taste. It is compact in size and its modern and tactful designs are useful for one handed operation. It features ZigBee® 2-way RF wireless communications and is equipped with 57 programmable buttons which allows you to control, scroll and command as per your needs. This remote also features an LCD screen which apart from being large and easy to read also supports large numbers of custom menu functions. The company exhibited this remote at the InfoComm 2008.

“The new Crestron MLX-02 is a state-of-the-art handheld remote …………… Its compact size and ergonomic design facilitate one-handed operation………………Intuitive, tactile control enables scrolling menus of channels, media titles, and numerous other commands”, as reported in a press release in Las Vegas on June 18th, 2008.

The central control system powers the LCD screen to display some real time information like the date and time, lighting levels etc. With the control system and other devices there is bidirectional communication system which allows dynamic updating of the menu items. A wide range of PC and Internet based contents like news items, media guides, appointment notifications, email messages etc can be accessed through Windows Sideshow™, supported by MLX-2. There are other features too like the display and the controls adjust to the lightining levels and alert for ‘low battery’ contditions etc.