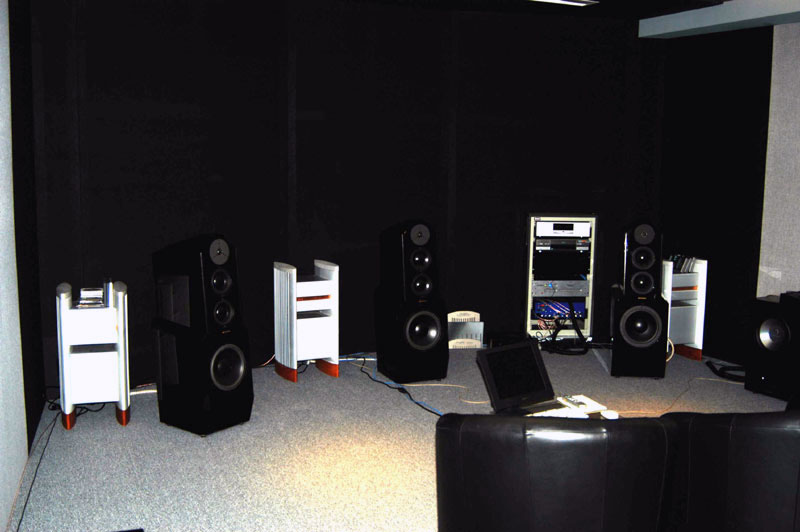 After visiting with Lon Neumann in the SACD Project Room in Hollywood, I was given a tour of the Marcussen Mastering facility by Eddie Wisztreich. Marcussen Mastering was founded by mastering engineer Stephen Marcussen in 1999. Initially the firm’s work was done out of the former A&M Studios facility in Hollywood while the current mastering studios were constructed. The firm moved in a year later and has been working there since. 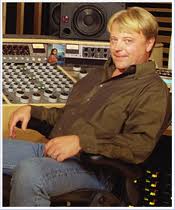 Marcussen Mastering has two mastering rooms and a digital editing room with an additional room under development. The studio provides mastering services for a variety of formats including stereo CD, DVD-Video, vinyl LP, SACD and DVD-Audio. Stephen Marcussen handles mastering work, Louie Teran performs mastering and digital editing while Stewart Whitmore also handles the digital editing side of things. The rooms in the studio were designed by SAGA architect and well known acoustic designer George Augspurger.

Checking Out Mastering Studios A and B

Studio B is where Louie Teran does his mastering and digital editing work. I had a chance to meet Louie and see his mastering set-up. The room includes separate custom-made analog and digital signal processing chains. Monitors in the room are B&W Nautilis 802 and Velodyne subwoofers. Other equipment includes Studer and Ampex tape machines, Manley and SSL compressors, Weiss equalizers, TC Electronics processors, Prism and dB Technologies D/A and A/D converters, Pro Tools and a Sonic Solutions Digital Audio Workstation.

Moving to Studio A, I met with Steven Marcussen who was doing a mastering project of an upcoming DVD-Video for Virgin Records. Marcussen’s mastering room has a similar equipment list to Teran’s room. He has full 5.1 channel monitoring for his surround work in the room. His custom analog mastering console has controls for all six channels as well as the ability to control the volume between pairs of speakers.

Also of note, all of the rooms are on a fiber optic network that lets them share equipment, including the Sony Sonoma DSD 8 Channel Workstation in the SACD Project Room. This adds Direct Stream Digital (DSD) capability to each room along with the separate analog and digital signal chains.

A Chat With Stephen Marcussen

I had a chance to chat with Stephen Marcussen during a break in his mastering session work. Marcussen started in the mastering world as a mastering engineer at Precision Lacquer, a firm he was with for twenty years. He mastered many an analog album at that firm before leaving to start his own mastering organisation in 1999. 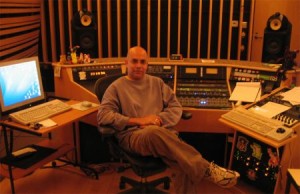 Louie Teran in Mastering Studio “B” at Marcussen Mastering.

According to Marcussen, he and Teran have been responsible for mastering a number of well known surround SACDs including ‘When I Look In Your Eyes’ by Diana Krall (Verve), ‘Ask a Woman Who Knows’ by Natalie Cole (Verve), ‘All I Got’ by Al Jarreau (Verve), ‘Glow’ by Peter White (Columbia), ‘Strange Beautiful Music’ by Joe Satriana (Epic) and ‘The Calling’ by Dianne Reeves (Blue Note).

When re-mastering surround sound SACD material that comes from analog master tapes, Marcussen says he keeps the material in the analog domain and does all of the equalization work there before the final transfer to Direct Stream Digital (DSD). Marcussen says “…you have to be at the top of your game” to be able to do all of your mastering work solely in the analog domain. But he feels with his experience and the custom analog consoles and equipment at Marcussen Mastering, he and his firm are well equipped for that challenge.

Looking forward, Marcussen envisions continuing his firm’s work in all formats including CD, DVD-Video, vinyl, SACD and DVD-Audio. He says he has noticed a recent uptick in assignments for SACD mastering and is planning to have Stewart Whitmore join himself and Teran in staffing the additional SACD work that is coming in the door.

After listening to three SACD samples (see part one of this report), it was time to jump into Lon’s company van – which just happens to have an SACD logo on the hood – and head over to Crest National. It turns out that Crest National is only a few blocks away from Marcussen Mastering and the SACD Project Studio. So it’s very convenient to take the finished DSD master tapes down the road for conversion to SACD test pressings. Lon told me that does indeed occur on many SACD projects where Crest National has been designated as the pressing plant for the final product.

At Crest National, we met with Robert Freedman who is the plant’s Vice President. Our first stop was a visit to the company’s lab and pressing area. There we had a chance to get an update on Crest’s SACD pressing program and the work they are doing to improve the quality of their hybrid SACD discs.

You will recall that some of the copies of Pink Floyd’s ‘Dark Side of the Moon’ hybrid layer surround SACDs that were pressed at Crest National developed cracks around the center hole of the SACD. Looking into the situation at that time, I reported on High Fidelity Review that several other Hybrid SACDs pressed at Crest National also exhibited such cracks while others did not. After the situation was discovered, Crest issued a statement and told us that they would be making a series of changes in their manufacturing process to address this situation.

The completed Crest listening room. Each of the Eggleston Works Savoy speakers is powered by an individual Halcro amplifier.

During the update, I was told that the original series of changes discussed at that time have now been fully phased in at Crest. Crest also has developed some test equipment to evaluate and analyze the quality and strength of optical discs (CDs, SACDs, DVDs) that are made at the Crest plant and elsewhere. In addition, they are now working to phase in a couple more changes to further improve the hybrid SACD discs that are made at Crest. In recent months, the number of Crest pressed SACDs displaying the cracking appears to be on the decline. It will be interesting to see if the additional changes now being phased in put the issue to rest in the future.

When I visited the Crest National plant last, they had just completed and opened a state of the art listening room. The room featured top of the line equipment including Halcro amps, Eggleston Works speakers, the Meitner Switchman II preamp/switcher, Meitner SACD-1000 Transport and DAC6 SACD playback system. The speakers were precisely placed and balanced in the ITU standard layout for 5.1 playback.

At the time, the room had literally been completed the day before and I was to be the first “outsider” to hear it. While that situation produced a number of disclaimers and nervous moments for the Crest, Halcro and Eggleston Works folks, the room delivered some wonderful sonics – even on day one.

Since that time, the listening room has been used extensively for testing and playback of hybrid SACD discs made at Crest National. Along the way, a screen and video projector were added so that DVD-Videos could be reviewed in the room as well. During this visit, I noted the new video equipment in the room as well as the completed carpeting and a new paint job. I was told that a number of well-known recording engineers, artists and producers had visited the facility to listen to surround sound SACDs.

To hear how the now fully burned-in room was sounding, Bob Freedman put on ‘The Concert for New York’ surround SACD (Columbia) and played three cuts: ‘Won’t Get Fooled Again’ by The Who, ‘Up On The Roof’ by James Taylor and ‘Let It Be’ by Paul McCartney. Freedman told us he used these selections to demonstrate the ability of SACD surround to convey a realistic sense of being at a concert. It was an effective demonstration with Lon Neumann in particular enjoying the selections as a former live concert-recording engineer.

Next we moved on to two standout SACD surround selections – ‘Hasta Alicia Baila’ from ‘LAGQ: Latin’ by the Los Angeles Guitar Quartet (Telarc SACD-60593) and ‘New Favorite’ from ‘New Favorite’ by Alison Krauss and Union Station (Rounder SACD 0495). Both were excellent in terms of providing detailed sonics from the front and surround speakers. ‘New Favorite’ remains an almost magical experience in the Crest room, in fact, Bob Freedman tells me that the Krauss cut is a favorite when other recording artists visit the room to hear SACD surround for the first time.

The “Check Disc” Surround SACD of The Who’s ‘Tommy’

As a surprise bonus during the visit, Bob Freedman pulled out the “check disc” surround SACD pressing of The Who’s ‘Tommy’ (Geffen B0001386-36) which had just come off the hybrid SACD line. The surround SACD is due out at the end of October (October 28th) and was being sent over to Universal Music for final approval before the pressing order began. After a quick call to the Universal eLabs group for a media clearance, it was time for a listen.

Freedman was very excited about being able to share the moment with Lon Neumann and I. He told us “It’s hot” and “a great surround disc”. We started out by listening to the first two tracks ‘Overture’ and ‘It’s A Boy’. Next up was the classic track ‘Acid Queen’. The 5.1 surround mix by Peter Townshend of The Who is excellent with extensive use of all five primary speakers. Vocals are placed in the center with instruments in both the front and surround channels.

But the highlight was clearly track thirteen, ‘Pinball Wizard’. It starts with the opening guitar riff in the right front speaker, the next riff pans to the left surround before all of the instruments and vocals come in to all five speakers. The result is a wonderful surround mix of a rock classic that the demo attendees called “great” and in one case “Wow!”. In short, I think this one will be on the must have list when it appears at the end of October.

And with that, I wrapped up my visit to three of the key SACD facilities in Hollywood. Two in the same building – and the other but a few blocks away. All in all, an enjoyable day that provided some interesting insights, news and listening to some very nice SACD discs that will be coming you way in the days and weeks ahead.