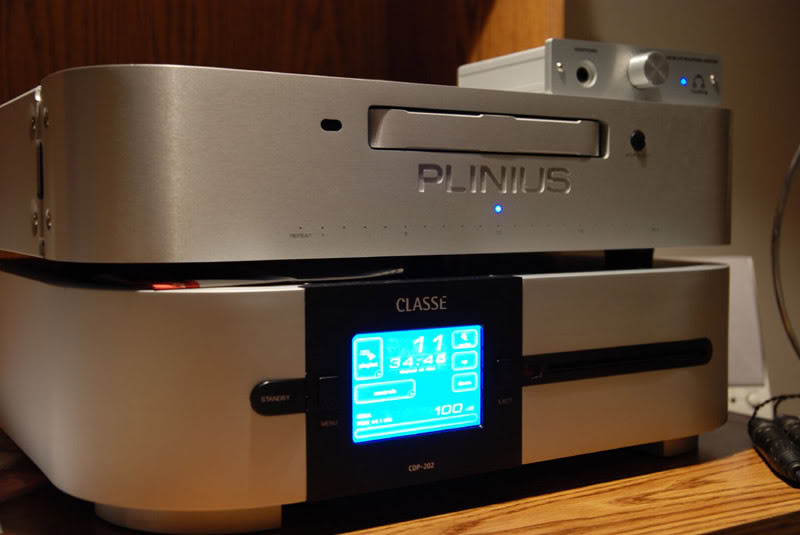 Classe have announced the CDP-202, a reference-quality CD player with DVD-Audio capabilities, which follows closely on the heels of the CDP-102, introduced late last year.

The CDP-102 and CDP-202 are two-channel audio players, optimized for best performance at different price levels. Utilizing the advanced Classe Disc Player platform, the Classe Design Team has created these models especially for music listeners who do not want or need multichannel analog audio or High Definition video features.

The CDP-102 and 202 utilize a TEAC® DVD-ROM slot-loader mechanism for reading discs. Its many advantages include superior disc-handling characteristics, reliability and control flexibility. The CDP-102 and 202 share the beautiful industrial design and elegant control screens found throughout the Delta series. They are the first CD players to offer touchscreen control and video preview on the front panel. The preview feature allows audiophiles the option of enjoying a pure music listening session without video, because DVD-Audio (or DVD-Video) discs may be navigated directly from the front panel.

For digital audio systems, timing accuracy or lack thereof has substantial influence over sound quality. To maximize performance in both units, digital audio signals are routed through a CPLD (Complex Programmable Logic Device) and sample rate converter. They are re-created as 24-bit/192kHz signals and re-clocked before being output to the D-to-A converters. By attacking jitter at its source, the Classe Design team makes great sounding audio possible from a variety of digital formats.

Stereo DACs (with 8x digital filters) perform the delicate process of converting digital audio to analog. Both channels of the stereo DACs are themselves converted as differential signals to derive the maximum benefit from Classe’s balanced analog output topology.

The sonic virtue of these players is complemented by a host of desirable features including touchscreen control, variable analog outputs, two-channel down-mix of multichannel recordings, bi-directional RS-232 control and preview capability for navigation of DVD-Audio or video discs.

The CDP-202 is functionally identical to the CDP-102, but offers enhanced audio performance commensurate with its price. Close inspection of the two models reveals that common design principals apply, but a greater number and cost of parts contribute to advanced performance from the CDP-202 along virtually every sonic metric.

The CDP-202 Left and Right balanced analog audio circuits employ their own digital-to-analog converters and operate in a true “double balanced” mode, ensuring a very high dynamic range. In other words, each half of the balanced signal is itself converted and handled differentially. The post conversion filters are designed to tight tolerances to ensure precise matching. In this way, the full potential of dual differential conversion is realized.

The CDP-202 is designed to provide maximum resolution and enjoyment from a wide variety of music sources. When used together with other high quality system components, the CDP-202 delivers amazing sound, serving up the music in true reference-component fashion. The CDP-202 will be available from April 2006 onwards, at a manufacturer’s suggested price of $6,500.
Classe CDP-202