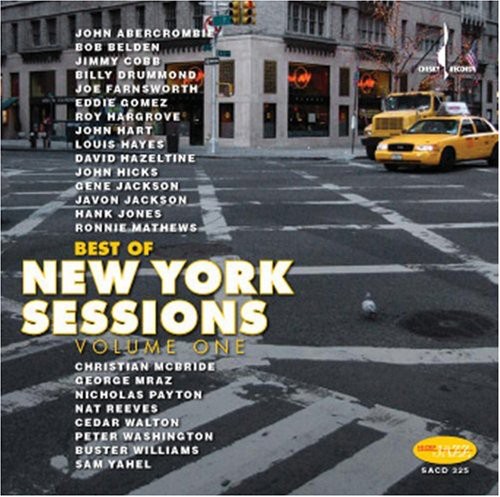 Chesky Records has released two new Surround Sound Super Audio CDs to kick off their New York Sessions “Hi Def Jazz” Series. The initial releases which Chesky describes as being “unleashed” in August are Manhattan by the David Hazeltine – George Mraz Trio with Billy Drummond and Structures by John Abercrombie and Eddie Gomez with Gene Jackson. They are Single Inventory Surround Sound SACDs with the SACD serving as both the Super Audio CD and CD Audio edition of the album.

Chesky has also announced that they will be adding a new Surround Sound SACD entitled World’s Greatest Audiophile Vocal Recordings to their release list for September. This will be in addition to the two earlier New York Sessions SACDs slated for release later this month.

The New York Sessions SACDs
Chesky’s New York Sessions Super Audio CDs feature new recordings made at St. Peter’s Church in Chelsea, New York. The discs come in standard Jewel Box cases with a yellow “Hi Def Jazz SACD” logo on the front of the album and the familiar stylized “SACD” symbol and text on the back of the album. Chesky notes that “This is a SACD Hybrid Disc. It will play on all CD and SACD players.”

When you remove the SACD from the tray, you will see a discussion of Chesky’s recording philosophy for this series of recordings. Chesky says “We give you the purest, most natural recordings made today captured with a single point microphone, using the world’s finest custom made electronics. No overdubs, no compressors in the signal path, no multitracking, no large mixing consoles. You can hear the difference.”

Manhattan features the Hazeltine-Mraz Trio with Billy Drummond performing 9 classics by the likes of Dave Brubeck, Jimmy Van Heusen, Harold Arlen, Ennio Morricone, Herb Ellis and Cole Porter as well as an original composition by David Hazeltine. Jazz writer Bill Milkowski describes the album by noting “throughout this highly interactive session, Mraz and Drummond create an interesting dynamic with their push and pull approach to swinging in tandem, with Mraz nailing the beat with unparalleled precision and Drummond laying back behind the beat just a touch in a loose, relaxed manner. Hazeltine colors the harmonic contour of these standards with subtle reharmonizations on familiar themes while swinging in quintessentially straight ahead fashion.”

The album was recorded on December 22, 2005 at St. Peter’s Church in New York. Manhattan was produced by David Chesky and Charles Carlini and recorded, edited and mastered by Nicholas Prout. The SACD was made by Sony DADC at their Terre Haute, Indiana Hybrid SACD replication line.

Manhattan has an elegant quality with the trio’s performances captured in the front channels of the SACD Surround Sound track of the album. As is customary with most Chesky SACD releases, the Surround channels are used for subtle ambience only. Noteworthy tracks on this album are Out of This World (track 3) which has an excellent bass intro by Mraz and Don’t Walk Away (track 8) which features excellent playing and highlights each member of the trio.

Structures is a new recording featuring John Abercrombie on Guitar, Eddie Gomez on Bass and Gene Jackson on Drums performing a mix of 6 jazz stanards and 4 original compositions by Abercrombie and Gomez. In the album liner notes, Bill Milkowski, contributing writer to Jazz Times and Jazziz says that “On the altar of the spacious 160 year old stone church, in close proximity to each other, Abercrombie, Gomez and Jackson hovered around a single microphone as they ran down tune after tune, listening intently and keenly reacting to each other’s moves with uncanny flexibility and finesse while navigating their way through the changes. This intimate, old school approach produced sheer magic. Structures not only speaks of the remarkable chemistry of its participants but also presents a compelling argument for recording with less as opposed to more.”

Structures was recorded on March 6th and 7th, 2006 at St. Peter’s Church in New York. As with the earlier SACD mentioned above, Structures was produced by David Chesky and Charles Carlini and recorded, edited and mastered by Nicholas Prout. The SACD was made by Sony DADC at their Terre Haute, Indiana Hybrid SACD replication line.

Listening to Structures in SACD Surround Sound, you’ll be treated to a very nice sense of space as the trio is presented in the front channels with the drummer seemingly behind the guitar and bass players. Performances to listen for here include Moon and Sand (track 3) which opens with an excellent solo guitar performance by Abercrombie which is then complimented by Gomez on Bass and Jackson on Drums after the song’s intro. Similarly on Turn Out The Stars we get some beautiful guitar playing from Abercrombie to start the composition followed by Gomez and Jackson.

This one will feature a mix of selections from earlier Chesky Surround Sound SACD releases as well as tracks from Chesky albums that have been released in CD Audio but not yet on Super Audio CD. It will include the following 12 songs from Chesky artists:

Upcoming Chesky Surround Sound Super Audio CD Titles
With the addition of the World’s Greatest Audiophile Vocal Recordings SACD, the upcoming Chesky Records SACD Release List is as follows in the month’s ahead:

Availability
The new Single Inventory Surround Sound SACDs of Manhattan by the David Hazeltine – George Mraz Trio with Billy Drummond and Structures by John Abercrombie and Eddie Gomez with Gene Jackson are now available in music stores that carry Jazz discs. Since these are Single Inventory SACDs with no separate CD Audio release, you will find them mixed in with the regular CD releases at these stores.