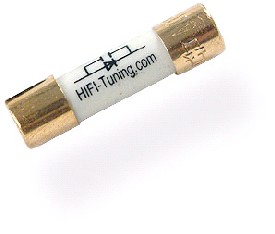 HiFi Tuning Fuses: 29.95-34.95$ USD. I’ve been in the audiophile scene since my teenager years; I’ve seen some weird concept, bizarre trends, voodoo stuff and other crazy things. The hi-end fuse concept seems a bit too strange, even for me but I still gave it a try. It almost happens as an accident, I was ordering tubes for my Cayin amp and I’ve stumble upon the page for HiFi Tuning fuses on the same website, I taught that a 30$ try wasn’t too bad.

The concept is simple, the entire electric power consumed by each component pass in a fuse so it better be good. The fuses are available in a lot of different sizes and specs (see websites for more details). The construction use gold over silver for the end caps and the centre seem in some kind of ceramic for resonance control (audiophile ceramics anyone?), beneath the surface is pure silver wiring. It’s exactly the kind of engineering one would expect when buying ‘hand made in Germany’. They are supposed to be the most effective on amps but extract good performances with other components.

Ask any audiophile who tried aftermarket power cord, they will all tell you they won’t go back to the stock cord: everything is clearer, more dynamic and the most important part, the emotion, is coming at you easier. I don’t want to ruin the review now but let’s say it’s in the same family.

Putting the HiFi fuse in the Cayin, it was evident the sound had changed. No need to go back and forth to hear minuscule improvements: it was obvious. Peter Gabriel album Up acquired a solid foundation. The bass definition and impact was updated as if I’ve change the amp with a much more powerful one. The slight electronic haze remaining in my system got lower in level which help the organic flow of the music especially exotics instruments from all over the world that Gabriel loves so much. The current passes a lot better in this fuse that in the stock one as it should (compare 29.95$ to 0.05$).

It also cleans a bit of artifacts residing in the treble range especially when you listen to digital source. This also helps to let the message of the song coming at you. For example, Dead Can Dance fabulous Into The Labyrinth delivers touching voices. This is emphasized with the fuse upgrade. In ‘Towards The Within’ the ethereal vocal of Lisa Gerrard floats in the listening room. This is also one of the best discs I own concerning soundstage largeness, especially the two first tracks ‘Yulunga’ and ‘The Ubiquitous Mr Lovegrove’, it’s now even getting a better focus.

IAM Saison 5 is one heck of a hip hop album. The French rappers have style and a production that hit you like a ton of bricks. Inflections and transistent dynamic speed are well conveyed here. The lyrics are more intelligible. This is the real deal.

Except that I had only this for a short period. Well I hadn’t all the specs needed when ordering the little device. I’ve ordered Fast blow fuses instead of Slow blow. Guess what, yep just two weeks of audition but the differences where very easy to spot. By the way before ordering, take all the information on the back of the component and on the fuse itself along with dimensions, it will greatly help.

The thing that bugs me is the fact that is component specific, you cannot interchange fuses because the posses different values. Normally the tweaks I write about here are universal and you keep them regardless of the gear you upgrade. This is a bit different; it has to stay in the component unless you’re really lucky to fit it in another. That bothers me; I wanted to put some in my CD player, a Talk Thunder with many fuses, main and many auxiliary ones. If I change the main one, I’m pretty sure the sound will improve a bit but if I change them all, I would cost me about 200$. When I upgrade, it’s lost. You can do an analogy with cars: take a Civic and upgrade it so it can compete with a Nissan 350Z. You end up with a car that cost more than the Z and is still a Civic. Is it worth it? When the law of diminishing returns kicks in? It up to you to decide.

On the other side the low price for this kind of upgrade is very impressive. Weird concept, bizarre trends, voodoo stuff: I don’t think so, it really works as claimed. I would like to have heard it a longer time and tested on other components but sometimes it’s the way things goes. I think the more resolution your system can give, the more evident the change of fuses will be apparent. I will buy some other fuses in the near future, the good ones this time…