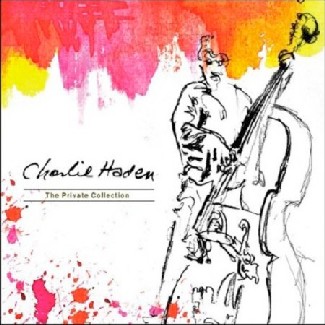 I love the acoustic bass. I love how it anchors jazz, and how in an intimate setting the bass becomes more than just a rhythm section…it becomes a voice of its own. Listen to Scott LaFaro with Bill Evans and Paul Motian on Sunday at the Village Vanguard, and I think you’ll understand what I mean.

Charlie Haden is reckoned by many to be the greatest living jazz bassist and, indeed, one of the all time greats. He has worked with jazz icons like Ornette Coleman and Keith Jarrett. He has a reputation for spinning lyrical bass lines.

This triple 180 gram vinyl album, released by the Naim record label, collates two titles that were originally released in restricted issue on CD in 1994. These are two live performances; the first was in celebration of Haden’s 50th birthday in August 1987, and the second recorded in April 1988 at Webster University in St. Louis.

These are inspired performances, and they are recorded beautifully. In fact, often jazz sounds best when (well) recorded live in concert. On the 50th birthday concert, Haden is joined by Ernie Watts on saxophone, Alan Broadbent on piano and Billy Higgins on drums. In St. Louis, the great Paul Motian replaces Higgins on drums.

There’s a lot (two and a half hours) of music on this album, and unlike many live albums, there is blessedly little time allocated to audience applause (bravo Naim!). The album is roughly evenly divided: The 50th birthday concert takes up all but one track of sides one through three, and the Webster concert the remaining sides. The feel of the two performances is distinctly different to my ears: The birthday party concert has more of a fusion (almost a funky) feel, with a meaningful amount of free-form saxophone. The Webster concert is more cool, more laid back (and the preferred one, in my opinion). Both concerts feature tracks by stellar jazz artists: Pat Metheny, Charlie Parker, Miles Davis, Ornette Coleman and Haden himself. Oh yes, and that cat J.S. Bach as well.

Standout tracks include Coleman’s Lonely Woman, Parker’s Passport and two versions of Metheny’s Farmer’s Trust. Of course, listening to individual tracks makes no sense: The beauty here is in the totality of each concert. I’d argue that you’re better off listening to one concert at a time.

The original performances were recorded in analogue. Vinyl mastering is done at Abbey Road, using a Neumann VMS 80 lathe. Cutting is done by Nick Webb. According to Simon Drake at Naim, these tapes were converted to 24 bit 96kHz digital, and both the CDs and the LP were cut from this version. I was hard pressed (extremely hard pressed) to identify a “digital sound” on this vinyl, so full credit is due to the engineers.

The vinyl is pressed at Portalspace using bespoke presses developed by EMI in the early seventies. Naim is (justifiably) proud of Portalspace’s work. My LPs were dead flat, unwarped and silent as a tomb.

Packaging is commensurate with the quality of the vinyl: The album cover is a triple gatefold (think of the original issue of Tommy) printed on glossy heavyweight stock in full color. There are plenty of track and performance details as well as some photos. The vinyl is encased in plastic-lined inner sleeves. A top rate package.

As noted above, these are two bravura performances. Even if you don’t know Haden particularly well, this is a great place to start. One proviso: Order directly from Naim in the UK if you can (you’ll need a UK or EU address for shipping). At £29.99 (about $43.00), this represents a meaningful savings over the outrageous $60.00 that the online US retailers are charging.