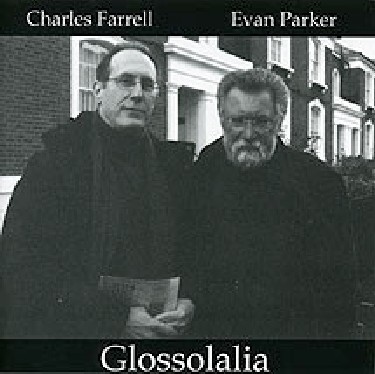 Think of the opposite of easy listening, and you come up with — difficult listening. That is the experience of “Glossolalia,” from first note through last.

Neither of these other two CDs sounds the least bit like “Glossolalia.” The similarities are in the intensity of the performances, and in the state of mind I achieve in order to endure and embrace them with any degree of equilibrium.

Farrell and Parker met in the recording studio, dusted off their respective axes, and played the living daylights out in two extended segments. Track One is 44:57, and Track Two is 26:47. 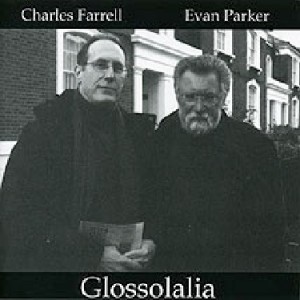 Careful listeners will get a sense that Farrell dominates Track One, and that Parker hits his stride in Track Two. These component pieces are improvised free jazz, without obvious melody, rhythm, chords, or structure. The musical term “moto perpetuo,” or perpetual motion, describes Farrell’s constant, frenetic, nonstop piano performance. He succeeded at playing “faster, harder, and longer than anyone else had without pausing for a second.” Parker must breathe, so his running musical delivery has pauses.

If Evan Parker is an accomplished sax player, Charles Farrell is a virtuoso pianist. Either musician could fill this recording without the benefit of assistance from the other. The one-two punch of their collaboration is beyond my descriptive ability.

Brian Moore’s three-page liner notes provide appropriate background info on the performers. His final sentences say a lot: “Most will find it tough going. You’ll have to concentrate, you’ll have to persevere, you’ll have to fight your way through to the core. That’s hard work, for sure. But a little hard work never hurt anyone.”

When you want to get your Thanksgiving Day guests to depart RIGHT NOW, place “Glossolalia” in your CD player and crank up the volume. You’ll be alone in a few seconds. This music is INTENSE, and demands you loan it your full psyche, if not your complete attention. A live concert or club performance of these tracks would be an exhilaration, but it will never take place.

Call me stupid — I’m going against my stated policy of not attempting to describe recorded or live music. If one percent of the readers of this commentary have the guts and wherewithal to embrace “Glossolalia” without preconceived intentions, these remarks will have succeeded.

Adventurous listeners will encounter depth and appreciation from the gradual inclusion of “Glossolalia” into their musical bloodstream. If you are courageous, this CD will reward you. Keep it handy for when you need to clear a room, update your operating system, bake some banana bread, or do some mind bending yoga. It’s serious stuff, and I congratulate Farrell and Parker for their accomplishment.

“Hope Springs Eternal” reminds me of the many multimedia and John Cagesque sonic creations that were common during the late 1960s. On this CD, Farrell and Parker are in a slow, deep musical fog, encased by one to four simultaneous streams of overlapping spoken text. Weird? Correct. 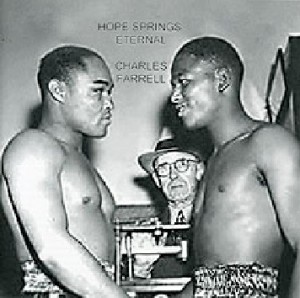 Except — all the voices, all male, were from messages recorded by Charles Farrell’s answering machine, during his career as a boxing manager and promoter. Snippets add up to a story of frustration and anxiety by his fighters and cohorts, every one looking for “Charles,” who was out of sight and definitely not returning any calls.

Farrell explains to MyMac.com that:

“there are, in fact, two female voices on the CD (although the point about their being all male is a good one; women are largely excluded from the machinations in pro boxing.) But the wives of two world champions (Betty Spinks, Leon’s wife, and Freddie Norwood’s future wife, whose name escapes me at the moment) both make brief appearances.”

Musical collage is an adequate description. Aided by John Stephan’s adept mixing skills and recorded guitar feedback, this one-of-a-kind construction is something you could fall asleep to. Don’t hold Farrell accountable for what shows up in your dreamscape.

I hesitate to term “Hope Springs Eternal” a novelty CD, but it’s so far out of the mainstream that the few readers who are drawn to it should, but not must, consider the effort worthwhile. Either way, Charles Farrell and Evan Parker are great players, with oversized musical personas.

“Bridge” is a theme used in a very famous recording by jazz saxophonist Sonny Rollins. The bridge of Charles Farrell’s and John Stephan’s “Cass Street Bridge, Tampa, Florida 2007” won’t knock Sonny’s from its foundation, but it may shake your windows and rattle your walls.

Extending Farrell’s piano technique farther than in the above CDs, and pushing Stephan’s mixology beyond the limits of comprehension, “CSBTF2007,” as we’ll abbreviate it, is a soundscape that blends found audio with improvised performance, into a semi-coherent brew. When you want to drive your apartment or dorm neighbors straight to the psycho ward, or get yourself kicked out of an apartment/ dorm before the second month’s rent is due, “CSBTF2007” is just the ticket.

Farrell tells MyMac.com (in what may become part of his liner notes for the yetunreleased single track 53 minute CD):

“This is a CD largely made up of the sounds of a bridge, the water that flows beneath it, and the cars that go over it. I also tend to play the piano hard. If you can listen to it at a volume that allows the bass register to slightly shake the floor, that will be about the right setting.

Although there is a lot of looped information and many sounds overlap or are manipulated, everything heard on Cass Street Bridge is organic: bridge, cars, water, Steinway D piano, and the voices of two girls who happened to be crossing the bridge as John Stephan was gathering source material for the recording.

I wanted to convey both the magnitude of the structure itself and its generally kinetic nature. The bridge literally never stops producing music. It expands, contracts, absorbs, and emits. The cars that traverse it produce recognizable tones, and when those tones combine they form recognizable chords. Hopefully John and I have managed to convey all these elements in the recording.”

Listeners don’t need to know any of the above to grasp the somber intensity of “CSBTF2007.” The frequencies in its first phrase are so low as to blow out your stereo woofer or shred your iPod earbuds, so consider yourself warned. Bridge/car/ water audio gradually yield to upper-register piano by midway through the disc, and Farrell is both prolific and profound in his expressive fingerings. My internalization of this collaborative audio project is to evoke a walk along the length of an imaginary bridge, losing myself in the transportative experience. But again, words are inadequate.

This style of composition has been popular in noir and horror and thriller movie soundtracks for over fifty years. I hope “CSBTF2007” achieves a permanent place among soundscape genre recordings. It probably won’t be the local fight song for any Tampa high school sports teams within the next millennium, but it takes found sound into a new dimension. I’m listening to it now, and “Cass Street Bridge, Tampa, Florida 2007” is masterful. Well done, Charles and John.