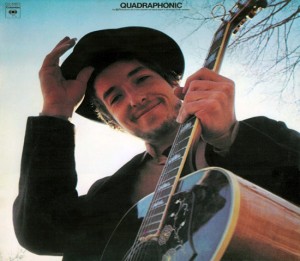 CES: In addition to the announcement about Dark Side of the Moon on SACD, tonight’s SACD Press Event also revealed a number of upcoming SACD releases from several additional artists including Bob Dylan, Peter Gabriel and The Police.

Providing an overview of the SACD format, David Kawakami, SACD Project Director for North America noted that 20 years ago, Sony and Philips launched the CD format at CES. It proved to be a big success and stimulated the purchase of packaged music by the consumer.

Today, record sales have suffered through two successive years of decline. Kawakami feels that the record industry needs a new way to stimulate sales and suggests that the high quality sound offered by SACD may indeed prove to be such a catalyst to bring music buyers back to the stores.

The Bob Dylan Super Audio CD Series
Jeff Jones, Senior Vice President, Legacy Recordings was at tonight’s SACD Press Event to announce that Legacy would be issuing 15 classic Bob Dylan albums on Hybrid SACD disc this fall. Referring to the Bob Dylan albums as “one of the great treasures of American Music”, he said that the Dylan catalog would be the start of “an ongoing program to enhance and upgrade the sonic quality and packaging elements of the Dylan catalog.”

According to Jones, the Bob Dylan SACD series releases this fall will be:

“The release of these classic Bob Dylan albums on hybrid SACD will extend the benefits of this exciting format to a much wider audience. Each of these Dylan titles will be reissued in stereo, and they will be carefully remastered and reproduced to the highest quality standards.”

Universal Music Announces SACDs from The Police and Peter Gabriel
Paul Bishow, New Formats Launch Director for the Universal Music Group was at tonight’s SACD event to announce the upcoming release of The Police Greatest Hits – Every Breath You Take: The Classics. The new Police Greatest Hits album will be a Hybrid Multichannel SACD with Multichannel SACD, Stereo SACD and Stereo CD versions of the best known hits by the group.

In addition, Bishow announced that the entire catalog of albums by the Police has been remastered and will be simultaneously released on both Stereo CD and Stereo SACD to help celebrate the group’s induction into the Rock and Roll Hall of Fame. The catalog titles appearing on Stereo SACD disc will be:

Universal Music Works On More SACD Releases
Paul Bishow told the attendees at the SACD News Event that it takes quite a bit of time and planning to prepare a new SACD release. According to Bishow, you need to indentify and locate the best sources for the album which would include a flat master for Stereo SACD releases and the original master tapes for albums to be remixed to surround sound for release as Multichannel SACDs.

Paul Bishow says that Universal Music has been “using the best master tapes available” for its SACD releases and “it shows”.

In the case of the John Coltrane’s “A Love Supreme”, several locations were searched before “a pristine master” was found in the U.K. This master tape was given to Rudy Van Gelder who used it in preparing the new SACD version of this jazz classic.

Universal Music has released approximately 20 SACDs to date and has “many more planned” for release during 2003 according to Bishow. Future Universal SACD releases will follow the pattern of the albums released to date. Namely, they will feature a mixture of new albums from best selling artists and classic catalog albums, stereo and multichannel/stereo tracks and both Hybrid Layer and Single Layer SACD disc configurations.

Bishow said that early consumer reaction to the Universal Music SACDs has been positive. Consumers have praised both the warm sound of Universal’s Stereo SACD releases and the exemplary sonics of Universal’s Multichannel SACD discs. As more new and catalog titles become available for release by Universal Music on SACD, Bishow says he hopes to get to a point this year where there will be a major list of SACD titles available for release every month.

In addition, Peter Gabriel is releasing his entire catalog on Stereo SACD disc. These SACDs are:

“By making our music available on SACD, UMG continues to bring consumers more choice in how they enjoy music, now in a high-quality, multi-channel format. With its many benefits for consumers and recording artists, Super Audio CD has the potential to become a standard for the industry.”

An SACD Update from Sony Music
At tonight’s SACD event, Leslie Cohen, Vice President, Business Development for Sony Music Entertainment, who David Kawakami introduced as the “Goddess of SACD at Sony Music” provided an update on Sony Music’s work with SACD. To date, Sony Music has released 200 SACDs, 60 of which are Multichannel SACD titles. Overall, the SACD format now has 1,000 titles worldwide with 700 of these titles available for purchase in the U.S.

In the weeks ahead, Sony Music will be releasing several new Multichannel SACDs to bolster their catalog. These releases include:

Cohen also announced that Sony Music would be adding several more Multichannel and Stereo SACDs to their catalog in early 2003 including:

There were also several upcoming Multichannel SACDs from Sony Music listed in the new January 2003 SACD U.S. Catalog handed out just prior to the event including:

One of the initial projects at the plant will be the replication of the Hybrid SACDs for the Bob Dylan SACD series. SDM officials say they will also be making their Hybrid SACD replication services available to record labels outside the Sony Music family as well.

In a press release handed out at tonight’s event, Michael Mitchell, Vice President and General Manager, Sony Disc Manufacturing was quoted as stating that

“As a developer of the SACD format, Sony is dedicated to expanding the awareness for and broadening the acceptance of this trailblazing technology. Our new hybrid Super Audio CD line reflects Sony’s and Sony Music’s shared commitment to providing the most advanced recording and playback technologies so that every music fan can experience unsurpassed SACD sound quality on equipment that is fully compatible with their existing CD collection, stereo and home entertainment systems.”

Upcoming SACD Releases from Other Labels
While tonight’s event highlighted upcoming releases from Sony and Universal, I should also note that the new January 2003 SACD catalog lists several other record label releases of interest – headlined by a number of future Telarc albums. These include:

Wrapping Up The Event
The event ended as it started. A series of 50 songs from current and upcoming Multichannel and Stereo SACDs were played through a 5.1 sound system set up by SACD Project DSD guru Gus Skinas. In fact, during the event Skinas replaced the usual club DJ at the dance mix desk.

Included in the selections were “Come Away With Me” by Norah Jones, “Sexual Healing” by Marvin Gaye, “Everyday” by Bon Jovi, “Why Not Me” by Ginuwine, “New Favorite: Live” by Alison Krauss & Union Station, “My Generation” by The Who, “He’s A Carioca” by Eden Atwood, “That’s Not Love” by Keb Mo, “Every Breath You Take” by The Police, ” “She’s Not There” by the Zombies, “Slow Burn” by David Bowie from the “Heathen” SACD. In each case, a picture of the SACD album cover was flashed on the walls along with the artist’s name, album name and selection being played. As a bonus, the crowd also was treated to “Just Like A Woman” from Dylan’s current “Blonde on Blonde” Stereo SACD as an example of what we can expect sonically from the upcoming Bob Dylan SACD series.