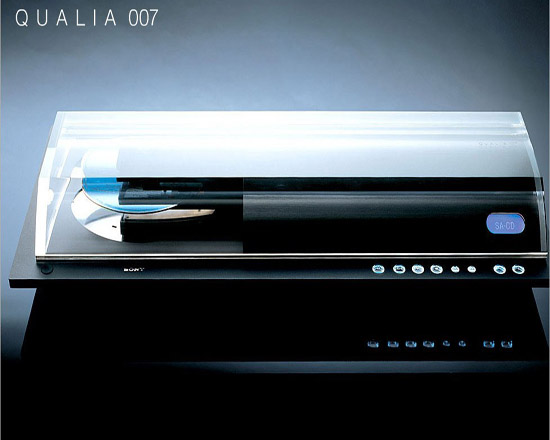 Returning to the well-heeled aura of its original SACD rollout, Sony Corporation unveiled this stunning new standalone SACD/CD player at the Consumer Electronics Show in Las Vegas. The single-disc player, to be sold under Sony’s premium Qualia brand as the model 007, sports sleek, futuristic styling that exudes high end. Slated to appear in April at an estimated price of $10,00 without loudspeakers and $12,500 with, the Qualia 007 includes a matching brushed metal remote control and built-in digital amplification. The product is so new that the Sony reps manning the Qualia room at CES were unable to provide any power output or other performance specifications. “We’re seeing it for the first time here along with everyone else,” said one.

To accept a disc, the unit’s clear acrylic hood glides smoothly to one side. Outputs consist of two stereo pairs – the 007 is a two channel-only player. Its inability to decode the sizable percentage of multichannel SACD content might give some purchasers pause, but Sony has obviously aimed this product at the traditional purist audiophile. So why the dual outputs? 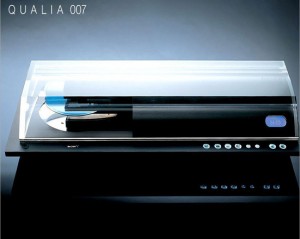 One set of the 007’s outputs can drive a pair of loudspeakers; the other can be paired with the recently-introduced Qualia Model 010 headphones ($2,600, available now), which were clearly designed with SACD playback in mind: they can handle an extended frequency range of 5-120,000Hz, allowing you to hear all those upper frequencies you can’t hear.