The DVD-D47, available from February onwards, reduces the price point for DVD-Audio to a new low (it has an MSRP of just $99.95). The DVD-Audio support is only two-channel however, but the model could be a cheap introduction to the format for the sceptical. It also has advanced progressive scan – according to Panasonic “…a video processor that doubles the scan lines of an interlaced signal (from 480i to 480p) by scanning all 525 lines in 1/60 of a second for each pass, resulting in an extended frequency response, reduction of background noise and enhancement of depth.” The machine boasts multiple format support (DVD-Video, DVD-RAM, CD, CD-R/RW, JPEG, MP3 and WMA) and HighMAT compatibility.

The new top of the line model is the Panasonic DVD-S97, with the same features as the DVD-D47 but adding six-channel DVD-Audio support and HDMI connectivity. The HDMI interface will allow transmission of DVD-Audio in the digital domain to a suitably equipped receiver/processor such as the new Panasonic SA-XR70 (see below). The DVD-D47 has an MSRP $299.95 and will be available in April 2004. 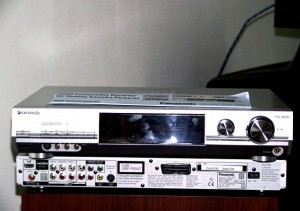 Also on show in the Panasonic display was the SA-XR70, a new digital receiver with an HDMI input and output. It also features digital amplification and audio signal processing. Other features include: support for DTS 96/24, DTS-ES and Dolby Digital EX formats, as well as Dolby Pro Logic IIx; multi-channel multi-drive with digital linear phase to harness the amplifier’s full capabilities when reproducing two-channel material; multi-source digital re-master (enhances “…dimension by adding home-theater-like sound quality to compressed music files such as MP3”) and a bass synthesizer to “…deliver superior bass”. Available August 2004, MSRP $399.95.

I had the opportunity speak to Reid Sullivan, VP of Panasonic Entertainment Group about Panasonic’s support for the high-resolution formats. In particular I asked him whether Panasonic had any plans to embrace SACD, as the competition seems to be heading towards universal players. Reid told me that Panasonic was fully behind the DVD-Audio format and

“…has no intention whatsoever of supporting SACD”.