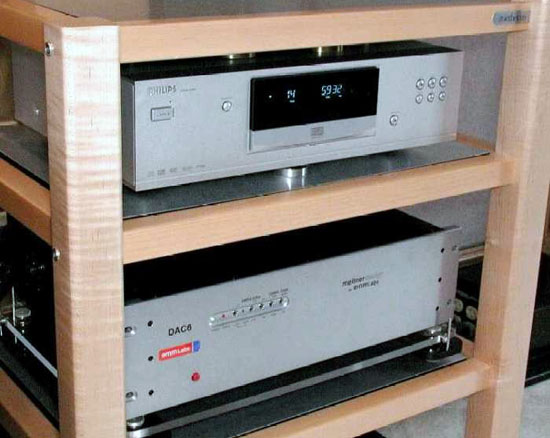 CES: Ed Meitner’s EMM Labs is partnering with Australian-based High End Amp and Preamp maker Halcro and High End Speaker makers Eggleston Works and Wilson Audio to preview the upcoming Meitner SACD Transport and DAC this week. The previews will be part of two booths headed up by Halcro at “The Show”, a high end audio show that runs concurrently with the Consumer Electronics Show at the San Remo Hotel in Las Vegas.

Earlier today, I was fortunate to run into the sponsors of this event as they were setting uo this demo – and they graciously gave me a sneak preview of what attendees of the demos at The Show will see. Here’s a brief report.

The Meitner SACD Transport & DAC
It’s been rumored for some time that well-known audio designer Ed Meitner was working on a high end SACD transport and DSD DAC for professional and high end audiophile use. What will be shown this week at The Show is a preview of what this product may look like when its made available later this year.

The product I saw earlier today consisted of a Philips SACD-1000 Multichannel SACD/DVD Video player that had been modified with the addition of an EMM Labs/Meitner Optical Interface Card. This card fits in a future expansion bay on the left side of the SACD-1000 unit. I’m not sure what Philips had planned for this area on the player when it first was released but it is present on all of the SACD-1000 players made from what I am told.

The 2 cables carry the audio signal and a clock signal to the DAC. Other features of the SACD Transport/DAC6 combo include a Phase Switch that allows the listener to select normal or inverted phase playback and an upsampling feature on the transport’s Optical Interface card that allows standard Stereo CDs to be upsampled to DSD with the combo.

Also of interest, the DAC6 features a unique mode that lets the DAC6 “pull” the audio and clock signals to the DAC6 when needed instead of the more traditional approach of the player sending audio signals to a DAC for processing. According to Ed Meitner, the “pull” mode of operation of the Transport/DAC combo is recommended for best performance.

The DAC6 product is similar to the DAC8 4th Generation Meitner Pro DSD converters that we profiled on High Fidelity Review several months ago. Key differences between the two would be 6 channels of conversion on the DAC6 vs. 8 channels on the DAC8, the elimination of the digital outputs found on the DAC8 professional unit (to address licensing requirements and record industry piracy concerns) and few mode and switching options than the pro unit. Otherwise, the two units are said to be sonically equivalent.

Listening to the Meitner Combo Through Halcro, Eggleston Works and Wilson Audio
After getting up to speed on the features of the Meitner SACD combo, the next stop was to sit down and audition the product.

As you might imagine, using products like those from Halcro, Eggleston and Wilson Audio should provide a very high quality listening experience. I’m pleased to say that turned out to be the case – and I suspect that many audiophiles will want to make a visit to The Show later this week to check out the goings on in Convention Center Rooms IV & V. Here are some of the highlights of my sneak preview visit today.

In Room V, Halcro, Eggleston Works and EMM Labs are conducting Stereo demos that are showing the Meitner SACD Transport + DAC6 with two different models of Halcro amps and two models of Eggleston Works speakers – the Rosas and the Savoys. During this demo, we heard the cut “Spanish Harlem” from Rebecca Pidgeon’s Stereo SACD “The Raven” on Chesky. The demo was impressive, providing some fine clarity on Pidgeon’s vocals as well as the instruments.

I also journeyed over to Room IV where Peter McGrath of Wilson Audio and Philip O’Hanlon of Halcro were tweaking a large room, Multichannel demo of the Meitner system played through Halcro amps and Wilson Audio speakers. Equipment in this set up included a separate Halcro DM 68 amp for each speaker (!), Wilson Audio Maxx speakers in the front channels, Wilson Audio Sophias in the rear channels, Wilson Audio center channel speaker and a Wilson Audio Watch Dog subwoofer. Switching was provided by a Halcro DM 10 preamp and the EMM Labs/Meitner Switchman II.

The Multichannel SACD demo started off with “In God’s Love” from the upcoming DMP album “Grace” by the Broadway Inspirational Voices. Playback of this cut featured holographic imaging across the Left, Center and Right front speakers and ambience in the rear channels. Male and female solo vocals were crystal clear and provided some compelling arguments for a Multichannel SACD set up vs. Stereo SACD playback – and Multichannel playback with a center channel speaker. Wilson’s McGrath said that this cut was “scary good.” Another convincing demo of center channel vocals was the track “Ooh Wee” from the recent “Marlena Shaw Live in Tokyo” Multichannel SACD on Eighty Eights Records in Japan.

During the Multichannel SACD demos, we also heard a variety of material including tracks from Kodo’s “Mondo Head”, Diana Krall’s “The Look of Love”, The Coronation of King George, Los Angeles Guitar Quartet’s “LAGQ: Latin”, Ray Brown’s “Super Bass 2” and “Lush Life” by Jacintha. All benefitted from the warm and smooth sound of the Meitner SACD Transport and DAC as well as the high quality Halcro and Wilson Audio set up.

Checking Out A High End CD Player vs. the Meitner SACD Transport & DAC
Next up, we listened to several cuts from Stereo CDs. These were played first through a high end, Metronome T-2i CD player that lists for $6,000 and then through the Meitner combo which will carry a price around $8,000. The question on everyone’s mind was how would the high end CD player fare vs. the DSD upsampling on the Meitner combo.

While the Metronome player is very good, the attendees at the demo found the warm and smooth sound of the Meitner Transport plus DAC even more enticing. So, while most folks were looking at the future Meitner product as primarily a way to get studio reference quality playback with SACD discs, its ability to warm up traditional Stereo CDs will probably gain some attention as well – it certainly did today from the CD comparisons we heard.

I’d encourage high end audiophiles to keep an eye out for the Meitner SACD Transport and DAC – either this week in Las Vegas in preview form or when it hits the streets later in 2003. While what we heard is still a preview unit, the final Meitner product could be very interesting indeed.

As to the products from Eggleston Works, Wilson Audio and Halcro, most are available today. I think these demos will help those vendors move a few more units of these amps, preamps and speakers as well. A very enjoyable session indeed! 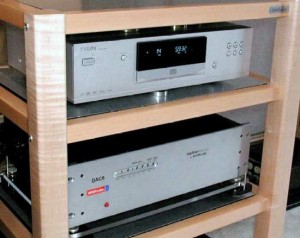