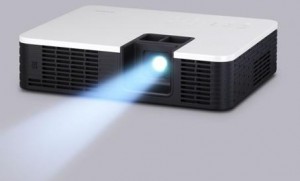 Casio now has two others. The XJ-H1650 and XJ-H1600 have Casio’s original Laser and LED Hybrid Source uses lasers, phosphors, and LEDs into one source. They both have a light source life of 20,000 hours, quick powering on and off, and it has a projection of 3,500 ANSI lumens.

These are apparently high end models, and they include Intelligent Brightness Control, as well as the ability to project 3D images to a “fully connectable interface”.