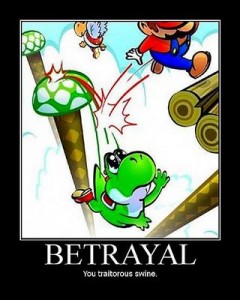 That’s the first thing that popped into my head when reading that board of directors member Carl Icahn was leaving the board of Blockbuster Video following “Institutional Shareholder Services guidelines regarding the number of directorships a person can hold”.

And of course, the first one that comes to mind when he considers which one to drop is, just coincidentally, the sinking ship known as Blockbuster Video.  Of course, considering that Icahn actually holds about seventeen percent of Blockbuster’s Class A shares, and another roughly eight percent of its Class B, it’s not like he still doesn’t have plenty of skin in the game.

Though it’s enough to make me wonder WHY he’s still holding all those shares.  Is he looking for a turnaround?  Or is he waiting for a bump in the market to raise all ships just enough to make a quick exit a little more profitable?

Don’t know…don’t pretend to.  But he’s out of there, and his next move…well…we’ll be keeping an eye out.