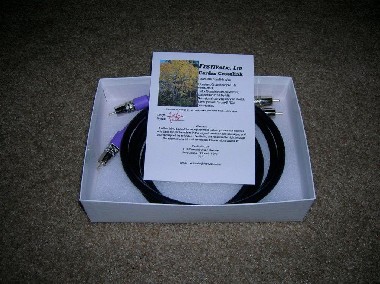 Affordable is a ambiguous word that can mean a myriad of things to a multitude of people. Websters Dictionary defines affordable in two ways; “to manage to bear without serious detriment”, and/or “to be able to bear the cost of “. One of the issues with both of these definitions is that they provide no reference. If you were Bill Gates, just about anything would be considered “affordable”. On the opposite end, if you wanted to build a budget audio system with a few hundred dollars, a $128 pair of interconnects would bear serious detriment to your budget. However, in the world of high fidelity cables and interconnects, $128 would be considered affordable, especially considering that Cardas’ paramount interconnect, the Golden Reference, boasts a price tag of $1138 for the comparative size tested.

The Cardas Crosslink interconnect does not follow the same design scheme as many audio cables today employ. It does not have fancy woven sheathing or a box containing a battery or audio network. In fact, it is very plain and doesn’t offer much eye candy at all. The cable itself is marked with patent numbers, Cardas lettering, and directional arrows, while being soldered to the silver plugs beneath lettered heat shrink. It’s a simple design philosophy, but one that Cardas enthusiasts know and respect very well. The construction of the cable uses what George Cardas calls its “Golden Ratio, Constant “Q” Stranding”. They claim that the Golden Section Stranding mathematically eliminates resonant multiples in conductors by sequencing strand masses and their associated inductive effects in an irrational progression. Whether that means anything to you or not, know that the cable consists of a pair of conductors with AWG 20.5 and a double, non-signal carrying shield. Combine that with a dielectric constructed of Teflon and cotton and an RCA capacitance of 36.9 pf/ft and you could have a formula for success.

The specific interconnects that I received were from a Cardas dealer named Festivalic located in Fort Collins, Colorado. These cables were finished to the exact same specification as the factory terminated models, including the nonmagnetic Eutectic brass silver plated plugs, and Tri Eutectic silver solder. They are heavy weight for a cable, have a smooth finish to their outer neoprene jacket, and are very flexible given their .305″ outer diameter. I was very impress upon receiving the cables as they physically felt substantial; a characteristic that has always made me feel like I was getting value for my money.

Now, on to the most important part of the cables; Well, how do they sound? Good. The Cardas Crosslink is an interconnect that sounds simply good. From the moment I hooked them up, I realized I had a quality product linking my DAC and my amplifier. The sound wasn’t the best I’ve ever heard, but it was just music. The Crosslink carried the signal without coloring it in an odd or inappropriate way; the demo tracks sounded like I expected them to. Having heard many other introductory cables, I expected the sound from this introductory Cardas cable to leave me wanting more. Isn’t the goal of an audio company to have you try their low-level, a.k.a. cheap, product and make you want to move up their interconnect chain, always wanting more? These interconnects made me a life-long Cardas customer for a different reason; if I never bought another pair, I would be completely satisfied. In actually, I’ll be feverishly working my way up the Cardas chain to discover what “Golden” gems await me.

I decided to choose a variety of music to put the interconnects through their paces after being allowed to burn in. The first selection was tracks from Christina Aguilera’s Back to Basics. This album was selected for the presence of her voice and the clarity of the recording. “Save Me From Myself” comes across just the way I would have hoped. Christina’s vocals are very forward and in your face, while still being soft and musical. None of the details are lost, including the warm and comforting sound of the guitar behind her. “Hurt” however came across as the opposite of the previously tested track. The Crosslink interconnects sink her vocals a little further back and into the mix piano and strings. This is the only track in the review that I could find that the Cardas cables did not interact as pleasantly with for whatever reason. The song got a little two-dimensional at times and also a little too subdued. Returning to the the more forward sound of the rest of the double album, “Makes Me Wanna Pray” plays back with all the detail of this complex track. The mixture of Christina’s voice with back-up singers, a piano, and a slight hip-hop beat does not get muddy or cramped. All of the parts are spaced as they should be, with only the treble extended a little high. All and all, an album that gets well represented through the Crosslink. 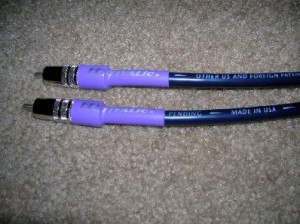 The second album was Telarc’s recording of Mozart’s Requiem. I enjoy the playback of this album for the complexity of the multiple voices in the choir paired with the symphony. “Introitus: Requiem Aeternam” starts very slowly and quietly with just the symphony, but increases dynamics and adds mixed vocals very quickly. These voices are in no way stifled through the Crosslink, and infact rise quickly out of the air with little effort; especially the female solos. The complexity of this track is also maintained without a compression of the multiple parts which retains the emotion of the section. “Sequentia: Lacrimosa Dies Illa” is voiced beautifully and is the emotional peak of this entire musical movement. The Cardas interconnects allow the voices to maintain adequate separation to deliver a full and powerful sound. Neither the male or female voices were over emphasized, and the al-
bum came across as balanced and neutral.

Last but not least, I selected Miles Davis’ Kind of Blue. I don’t believe this album needs any introduction, but the mixture of a few Jazz legends blending their instruments from 1959 has not been so well replicated yet. To start, the Crosslink allowed all of the stereo separation to be fantastically placed. You actually feel as if you are sitting in a studio holding the mic for this recording. If the Cardas interconnects did one things for this recording, it was to leave them alone. All the tracks on Kind of Blue remained very powerful and musical, without a whole lot of influence from the cables. While listening to the entire album, the only thing I might tweak about the play back was a bit for flatness about the piano and saxophone, but I’m still not sure whether I can attribute that to the interconnects.

My final word with the Cardas Crosslink interconnects is that they allow music to flow. Do interconnects and cables change the way the signal sounds? Yes. Is that a bad thing? Not with the Cardas Crosslinks. When I’m excited to listen to a piece of music on my system, using the Crosslinks produced a quality and musicality of sound that I hear in my minds-eye. From the voicing to the speed and placement, the Crosslinks delivered what I wanted and expected from my favorite tracks. This however, is not a judgement on Cardas’ greater lines of interconnects as I have not had the pleasure of demoing them or comparing them to the Crosslink. In fact, I would assume that the greater of the Cardas lines would display the above characteristics even better than the lowly Crosslink, but that will be for a later review. The Crosslink may be an introductory interconnect, but it is the best introductory interconnect of any cable company I have heard. This will keep the Crosslink in my system for the foreseeable future, and Cardas products in my
system forever.