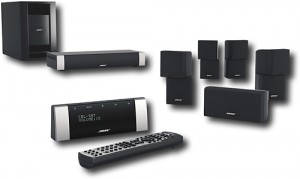 The Bose Lifestyle V20 is a 5.1 channel home theater system with built-in surround sound decoders, AM / FM tuner, four DirectReflecting cube speakers, a center channel speaker and the heart of any good Bose system, the Bose Acoustimass module.  It also offers two HDMI inputs, S-Video inputs, component video inputs and outputs, and the ability to transform any DVD player into an upconverting one by routing it through the unit.

I expressed some doubt before that this was the Bose system for you, and here’s why.  One, you don’t get a DVD player with this one, but rather you have to hook one to it.  This by itself isn’t all that bad, and the fact that it’s a five channel system as opposed to a seven channel can also be overlooked as the sound output coming out of this thing is just patently incredible.  But here’s the rub–you’ll have to shell out fully two grand for this system, and despite the incredible performance, value suffers due to that huge price tag.

You won’t be disappointed if you do shell out for the Bose Lifestyle V20, but know this: there are probably better values out there if you keep your eyes open.