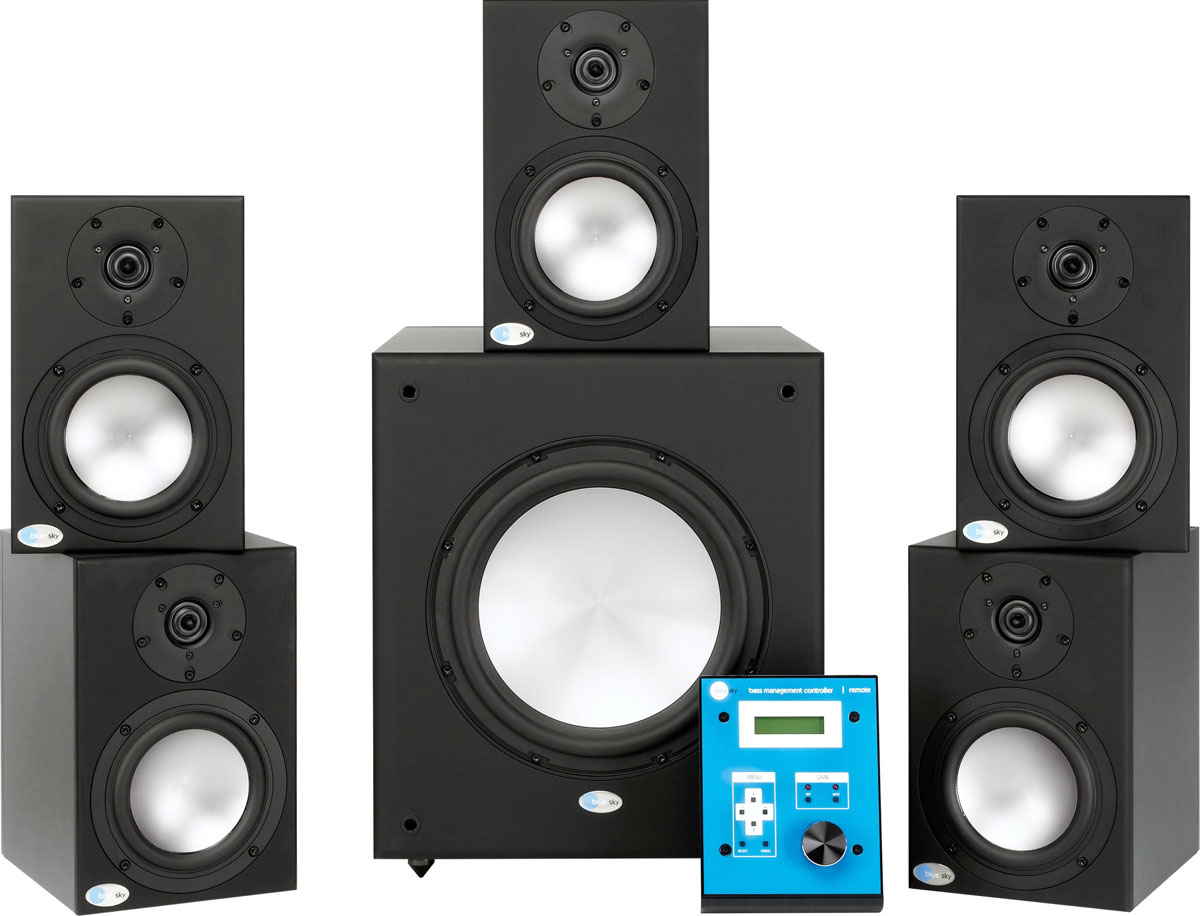 One of the hardest tasks in putting together a surround monitoring system is finding the individual parts. It’s not uncommon to have a subwoofer, bass manager, monitor controller, and monitors all from different vendors, which makes assembling and interfacing a system sometimes harder than it should be. And when you add the individual costs of all these pieces together, it causes some to omit the bass manager and monitor controller or forget the entire thing altogether because the total price exceeds a modest budget. Now a new company called Blue Sky not only brings all of these components under one roof, but does it at an affordable cost as well with the new Blue Sky System 5.1.

Blue Sky is a joint venture between longtime audio importer and distributor Group One, Ltd. and design house Audio Design Labs, which includes former designers from M&K, JBL, and THX. Since the principals of both companies have had a lot of experience with surround products from other companies in the past, they are not only aware of what the market needs, but how to build it as well. The result is the Blue Sky System 5.1, a system that contains not only the monitors, but also the bass manager and monitor controller in one seamless and affordable package. 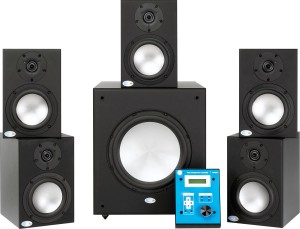 The System 5.1 is truly the most complete surround monitoring system on the market at the moment. It consists of five SAT 6.5 monitors, a SUB 12 active subwoofer, a 19-inch rack-mountable BMC bass manager, and remote monitor controller.

The SAT 6.5 monitor is both substantial and distinctive in appearance. It’s a biamplified two-way monitor consisting of a 6 1/2-inch hemispherical woofer and 1-inch tweeter, but that’s where the similarities to other small monitors end. You won’t mistake a SAT 6.5 for any other monitor on the market because both drivers really are unique looking. The woofer is quite distinctive in that it uses a mica-filled polypropylene cone that gives it a silver metallic look, while the tweeter has a dual concentric diaphragm with an integral waveguide that causes it to jut out a bit in a “nipple” fashion. Both drivers are fully shielded for use near a video monitor or computer display. For power, the SAT’s use two 100-watt amplifiers for woofer and tweeter, with a computer-optimized crossover frequency of 1.5 kHz. The frequency response of the system is ±1.5 dB from 200 Hz to 10 kHz and ±3 dB from 80 Hz to 20 kHz.

The cabinet itself is 12 inches high by 8 inches wide by 10 1/4 inches deep, and is very solidly constructed. With 3/4-inch MDF walls and a 1-inch front and rear baffle, the unit is a heavy (for its size) 27 lbs. The bottom of the cabinet also has threaded inserts for OmniMount type 100 mounting brackets.

The front of the SAT 6.5 is rather nondescript, with no controls, indicators, or vents – only the distinctive drivers. The rear panel, however, has much more going on. There is only one input, and that is a balanced input XLR with a Gain Control and a Power On LED right next to it. There’s also a power rocker switch, IEC mains connector, and a 2.5-amp slow blow fuse along with a large heatsink.

The SUB 12 is a powered 12-inch woofer with a typical in-room bandwidth of 20 to 200 Hz. It’s amplified by a 200-watt amplifier. The unit is 18 inches high by 16 inches wide by 20 inches deep, weighs 62 lbs., and comes with attachable spiked isolation feet. The SUB 12 also has an integral bass manager section, but for stereo only (for the 2.1 system) operation. The rear panel contains balanced Left and Right XLR inputs and outputs, along with an additional SUB OUT XLR for connecting a second subwoofer. There is also a Mute switch that allows for automatic muting if there’s no signal for 15 minutes along with a Gain Control, Phase switch, Power switch, fuse, and IEC power connector.

The Blue Sky BMC bass manager is a very professional unit in that it’s a 19-inch rackmount and has balanced XLR inputs and outputs. Other than the fact that it has an On/Off rocker switch on the back panel, an additional sub XLR out for a second sub, a front-panel on/off LED, and an RJ-11 connector for the controller. It has no user controls. The unit crosses over at a more or less industry standard of 80 Hz.

The BMC Controller that I used was a prototype, but Blue Sky states that, while the physical case will change in the final version, the functions will remain the same. This controller is an integral part of the Bass Manager, and is connected via a common RJ-11 telephone cable. The unit gives you the basics required for 5.1 control in that you can control the level, mute the monitors, bypass the bass manager, and set a reference level. The level control is attenuation only, and while this might seem like a limitation, in practice it works well since the inherent sensitivity of the entire monitor system is pretty high. The controller has a small LCD, a large rotary level control pot, and controls for system muting and level reference as well as Up, Down, Left, Right, and Select switches. While dedicated monitor controllers have more functions, Blue Sky’s has just enough to make it usable in the majority of surround situations. The accompanying manual for the speakers is very clear and complete from both a technical and operational sense, with sections on Design Philosophy, Quick Setup, Connections, and Product Details among others. Since the Bass Manager and Controller where prototypes, there was no manual for these units at the time.

How Do They Sound?

I really like this system, partially because of its sonic quality and partially because of the convenience that’s inherent with its integral bass management and monitor controller. The system is very, very pleasant to listen to. Part of this is because, like so many other monitors, it is a bit scooped in the midrange around the crossover. This might make it a difficult listen for those who are used to the in-your-face mids of NS-10’s, but it won’t be much of a problem for anyone who wants to give the SAT’s a chance and take some time to learn their response.

That being said, the response of the low end from SAT to SUB 12 subwoofer is the smoothest I’ve heard in an off-the-shelf system yet. With the right room placement of the sub (because of the localization of the higher sub frequencies), the system sounds like large full-range cabinets, but without the usual disconnect that happens at the crossover area of the sub. While this system will work well in just about any application (and I used it in a few), I think it’s perfect for a surround-based DAW. One of the problems in most software DAW packages is that they don’t have provisions for level control for your monitors. In other words, if you want to print a mix at the highest levels, then you have to raise the master fader to a level that will blow your eardrums (not to mention your speakers) out. In stereo, this usually isn’t that big a deal, as most users have a small stereo mixer to control the speaker levels, but it’s different story in surround where a dedicated monitor controller is sometimes the most expensive part of the system. With the Blue Sky System 5.1 package, this is no longer a worry since the entire system is so affordable. And with everything on XLRs and balanced, the ease of use of the controller, and the individual gain controls on the monitors, the system is very easy to set up and calibrate as well. It should also be noted that this system has been approved for use in THX pm3 certified studios. I believe that this package is the least-expensive THX pm3-approved speaker system on the market. As stated previously, you get a big “bang for your buck” with this Blue Sky system. A 5.1 system complete with bass manager and controller is available for only $3295, which is really a bargain considering the high quality of the system. This is not only a well-built system using quality components, but it really sounds good as well. With the addition of the monitor controller, it’s an unbeatable surround system for all but the largest requirements.