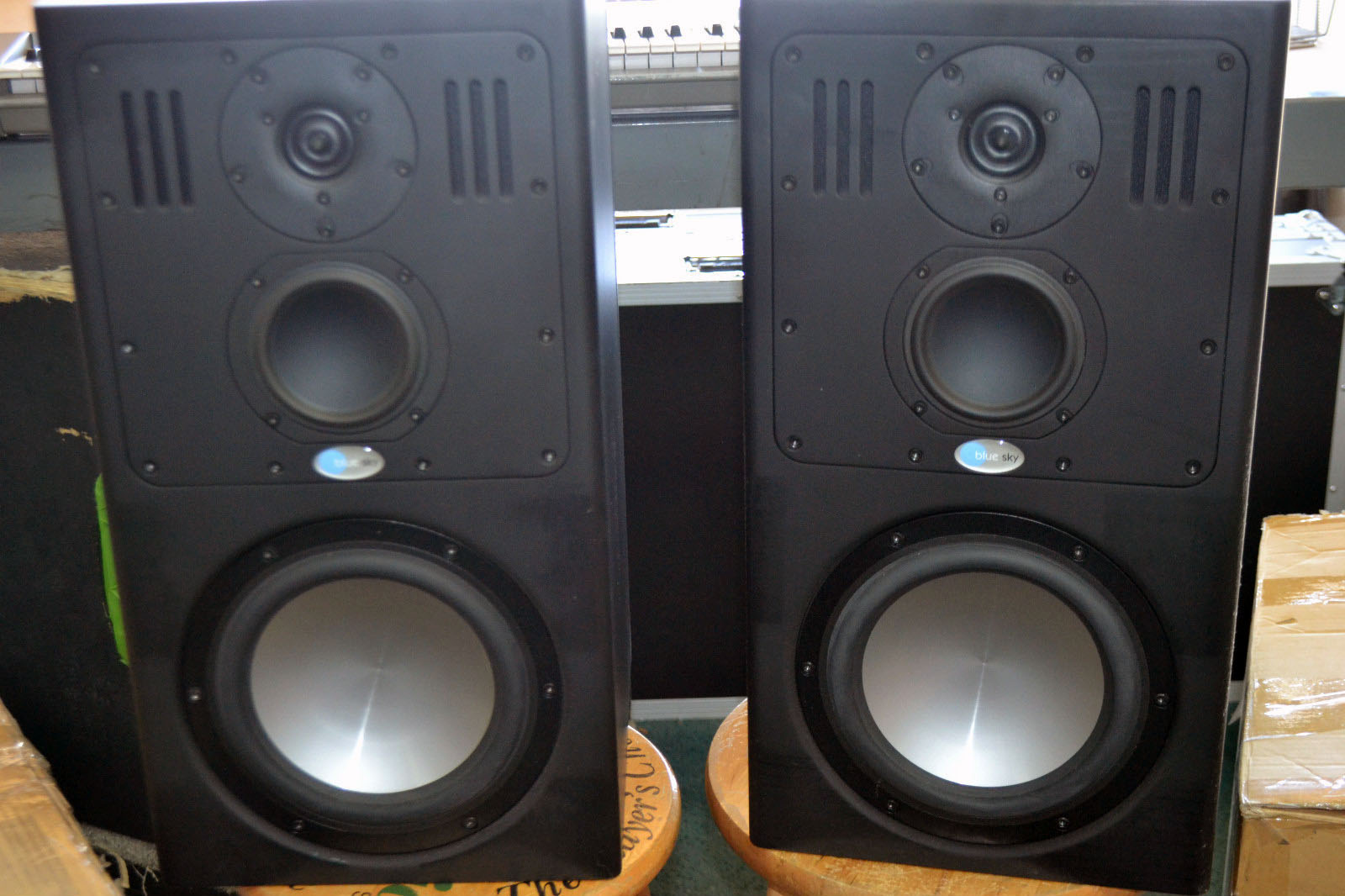 As the owner of a mid-sized project studio, I’ve always used nearfield monitors for mixing and kept oversized consumer speakers (or even small PA speakers) in the rear of my large control room for clients who wish to track without headphones, or to “hype” my clients with loud playback.

However, I’ve always had a yen for some midfield monitors to expand my mixing palette, better fill the room, and further inspire performers.

In my use, I have found the SAT 8 threeway powered midfield monitor with SUB 212 powered subwoofer from Blue Sky was what I was longing for. They have proven to be very useful for my large control room environment — yet the transition was quite difficult or, should I say, educational.

Blue Sky’s SUB 212 is a dual 12-inch, 400W subwoofer with sealed box and “push-pull” design that utilizes dual drivers, which, according to the manufacturer, reduces even harmonic distortion. Blue Sky documentation explains: “The bottom driver has its magnet facing out of the box and is driven electrically out-ofphase from the front driver, which keeps both drivers acoustically in phase. However, when the front driver’s cone is moving away from its magnet, the bottom driver’s (reversed) cone is moving towards its magnet. This puts the even harmonic distortion components of the bottom driver out-of-phase with the front driver. When you combined the outputs of both drivers, the even harmonic distortion of both drivers cancels, reducing the overall distortion of the subwoofer. The SUB 212’s fourth-order 80 Hz Linkwitz-Riley low-pass filter and second-order 80 Hz high-pass filter are matched to the response of the SAT 8 (as well as other Blue Sky full-range components including the SAT 12, SAT 6.5, and SAT 5).”

In order to acclimate myself to the Blue Sky system, I first tried it in the acoustically flawed rear of my control room. I immediately noticed that they projected into the room, filling it better than my consumer models had and offered a pleasantly understated midrange. However, the system didn’t sound good there, with poor imaging and muddiness. I then moved the system to the front of my control room, mounted as primary monitors on my meter bridge shelf and placed the SUB 212 slightly off-center under my console furniture. The Blue Sky system then sat just outside my JBL LSR4328 monitoring system (the JBLs in the traditional four-foot equilateral triangle with my sweet spot, the companion JBL with its subwoofer below) in a six-foot triangle with my sweet spot after a quick push back of my Aeron chair: I could then monitor in the midfield, just about like my clients do.

In this position, the SAT 8 pair produced fine imaging, a nicely wide and deep soundstage, with a balance clearly more subdued (and, I must say, darker) than any monitor I have ever extensively used or reviewed (ADAM A7, KRK Exposé E8, Focal CMS50, JBL 4328, and numerous old-school models along with two- and three-way Tannoy, Dynaudio and Genelec models). I can best describe the frequency response curve as strong and pronounced at 200 Hz; largely flat through the mids, with a touch of comparative de-emphasis at around 6 kHz; and an overall slight tilt towards the bottom end. Admittedly, such response looks a bit undesirable in print, but it proved to be quite the opposite for my work habits and sonic goals.

At this point, I employed the SAT 8’s baffle compensation EQ, rolling back to -2 dB, which helped clear out a touch of excessive low-mid murkiness. Even after such compensation, I still found myself struggling with the bottom end on snare, mids on kick drum, and bass guitar in general. However, over a period of months, I refined my mix approach (with rough mixes at first), literally learning to mix in a new way based on the unrelenting detail and definition the SAT 8 pair provided between 160 and 800 Hz. 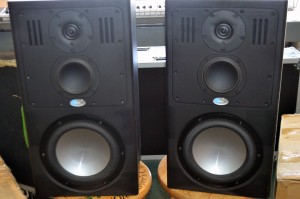 As difficult as this process was, this Blue Sky SAT 8 pair has made me a better mixer! I am positioning bass guitar more boldly within the mix, where I now physically enjoy it in the control room, and the tactile balance actually translates nicely elsewhere. I also pay more attention to sculpting the low EQ of my snares, getting a better relationship between, for instance, a 200 Hz fundamental and the overtones above and below it.

I have benefited greatly from the accuracy that the SAT 8’s midrange driver brings to the table. It is not vocals that have improved in my work but the balances between competing instruments. For example, in my own pop mixes, two guitars (L and R) that should be equally represented; keys versus guitars in balance; or two percussive elements like drum kit and tabla, both vying for space and depth, are more refined and precisely placed than ever. With the SAT 8 system, I’ve found the mids so accurate that I make such decisions with great ease, decisions that have typically held up while listening elsewhere.

The SUB 212 is well designed and sturdily built; it offers sufficient amp power and polarity reversal (although a variable phase adjustment would be nice). Sonically, it is loud, deep, and powerful, yet still not a perfect fit for my personal tastes; I imagine that is due to the push/pull design, which does indeed output a lot of SPL and minimize distortion, but not in the punchiest of ways. I find the SUB 212’s approach best suited to music with sustaining bass notes, where musicality and tone are most important, such as orchestral music. For rock and pop music — where monstrous kicks and constant punchy thumping are the norm — I found the push/pull approach too pillowy and round, slightly lacking some snap and tightness. This design approach is not without “pop-worthy” merit, however; as I worked harder than usual on my kick drums and basses, I also received better results. My mastering engineer of choice, Dave Harris of Studio B Mastering, immediately noticed the changes in my work while using the Blue Sky system, but only in the bottom end of my mixes; he commented on how he was tweaking different frequencies than normal, but proclaimed that my mixes were excellent — “better than usual” is probably more like it. 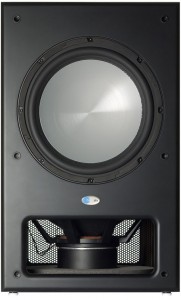 I’ve done some mastering work myself with the Blue Sky system and, after a troubled learning curve, I again came out a better man, or rather a man with better work. I often don’t listen loudly enough when mastering (I’m thinking fadeouts and black gaps in particular) because of the discomfort of fatigue and fear of that fatigue adversely affecting my EQ decisions. The SAT 8 pair was pleasant enough to avoid this behavior, and their smooth handling of 8 kHz and above guided me into some pleasant highend sweetening.

In my own discovery, I must declare that there’s nothing to dislike about the Blue Sky SAT 8/SUB 212 monitoring system: it offers quality drivers; ample amplification; vertical or horizontal placement (SAT 8); level controls for woofer/midrange/tweeter; defeatable “auto on” functionality (a bit bothersome at first, but worth it for reduced heat and less power consumption); and a high-output subwoofer.

Before purchasing this system, I can name only two real concerns. Will you will approve of their sonic signature, which I would comparably describe as “detailed, rich and thick” — perhaps the aural equivalent of expensive dark chocolate? (I definitely approve.) Secondly — and the only thing holding me back from immediately buying this system — can you justify the price tags of $1,750 per box (per SAT 8 or for one SUB 212, street)? Don’t get me wrong, the Blue Sky is most likely worth all of $5,250 to your work; my improved work quality and newly found mix decisiveness with them is a testament to that. If you have the budget and a room big enough to do justice with this midfield system, you won’t regret having their brazenly accurate mids and excellent versatility at your disposal (as well as reduced ear fatigue at the end of each work day).