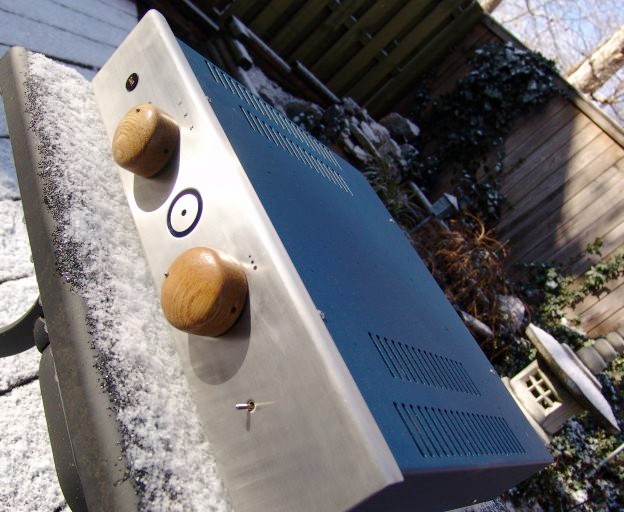 I’ve always gravitated towards people who approach life from an unconventional perspective. Upon strumming up the first conversation with Gilbert, the head (blue) cheese of Blue Circle Audio, it was apparent that we would get along very well. Although I’ve only been in this reviewing gig for just over a year, I can guarantee that I will never again have a phone conversation with a manufacturer in a make-believe language, or “Chingalish”, as Gilbert likes to call it. “It vewy fun ting. U shud try sumtym.”

As much as I enjoy an eccentric free spirit who, like me, casts blatant disregard for cavalier hi-fi attitude, I wouldn’t be writing this thing if it weren’t for Gilbert’s reputation of creating award-winning, high performance stereo components. Blue Circle Audio has been churning out amps, pre amps, and accessories for well over a decade. More recently, Blue Circle has begun to offer DACs and even nearly-full-range loudspeakers.

As Blue Circle’s palette of goodies continues to expand, the ever-increasing cost of raw materials and a shaky exchange rate have resulted in the discontinuation of a few well-respected pieces. Not too unlike the cycle of life, the death of one creature often bestows life onto another. And so the DAR was born.

Getting to know the DAR

Before I move on, let me address the DAR’s namesake. The name DAR is an abbreviation for “Death and Resurrection”. This is a direct reference to the discontinued BC-2 mono blocks – amplifiers that rocked the high-end scene and made listeners swoon back in the late 90s. Gilbert designed the DAR from the ground up in an effort to recreate the general character of the former giants albeit in a much smaller and much more affordable package. 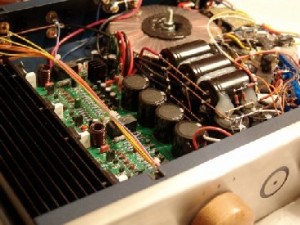 The DAR takes the helm as the latest hybrid integrated amplifier to wear the Blue Circle badge. The topology uses a 6SN7 tube at the input stage, and two high power bi-polar transistors running in class A/B mode at the output stage. Each stage is designed to operate independently by drawing current from its own separate power supply. To keep the DAR compact, Gilbert uses a pancake style toroidal transformer, chosen for its slim size, high current capacity, and ultra low noise. The bandwidth of the transformer allows the DAR to comfortably push out 100 watts into 8 ohms, and 150 watts into 4 ohms.

Another cornerstone of DAR’s circuit is power efficiency. Unlike today’s current crop of power hungry hybrids, the DAR wastes very little energy. This translates into great dynamic peaks and cool operation. You won’t need to reserve a tremendous amount of rack space to accommodate this integrated – just a few inches will suffice. Those of you who are more environmentally conscious will be pleased to know that the DAR uses very little power at idle, and when powered off, the unit is completely disconnected from the power source. Not only is this good for your wallet, but it’s also good for the environment!

As expected – maybe even anticipated – the review sample arrivedat my abode wearing traditional Blue Circle garb: the trademark blue chassis, stainless steel face plate, wooden knobs, and a clean circuit layout. There is a sense of uniqueness to Blue Circle products that I find attractive, especially when sat next to more common and more expensive “jewelry”-laden electronics. Although compact, the DAR nonetheless retains a build quality that is right in line with what I expect from a piece at this price point. 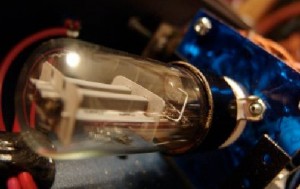 Other amenities include a pre-out section (for use with an external amp or subwoofer), an Earth ground post and a Ground lift switch. It is important to note that this sort of versatility is sorely lacking from many other competitors.

The only complaint I can warrant against this well-built, well-thought-out integrated is my dissatisfaction with its binding posts. Although impressive in size and extremely well-built, the posts do not accommodate banana plugs. Gilbert sent out a pair of banana adaptors so I could use my existing wire. For those in need, these adaptors can be purchased for a very modest price directly from Blue Circle.

The Sound of Blue Circle DAR

The bulk of my evaluation was done using a set of Totem Acoustic Forests, a pair of speakers that sounded magnificent with the DAR. With good synergy flowing, I sat down to spin some tunes. Upon hearing the first musical passages, I was immediately aware that this little integrated was something special and, like its maker, refused to travel down a conventional path.

Track after track, note after note, I couldn’t help but notice that the DAR’s character wedged itself somewhere between the classic warm and introspective British presentation and the more transparent and resolving North American sound. This is exactly what I’d expect if Naim and Sim Audio were spliced together. The end result is a highly enjoyable and musical sound that masters no particular trade, but is nonetheless very good at them all. The overall presentation of the DAR is slightly soft and reserved, sporting a modestly rich tone and highly engaging character that exudes solid top to bottom balance. The unit never sounds too dark, or too bright – never too dry or overly lush. No matter which angle I used to dissect the DAR, its presentation managed to escape tipping the scale to one extreme or the other. It always struck a happy balance between distinguished character and ‘tell it like it is’ transparency.

My stint with the DAR surfaced many pleasant surprises. Its character notwithstanding. The first surprise was the DAR’s lack of electrical noise. This thing runs dead silent. No hiss. No hum. The second surprise was its ability to control the Forest. Prior to inserting the DAR into the rig, I was running roughly 10K worth of separates that were built for speed and control Swapping out the three-piece monster system for a slim one-box job instilled an expectation that there would be a significant loss of control. Surprisingly, this hybrid integrated was capable of yielding control that did not lag too far behind the mighty separates. The rendering of transient attack and decay was lightning fast. The only thing missing in that regard was the same sense of scale and dynamic ease. Then again, something will be missing when you step down from the clouds.

A number of audiophiles feel that the line which separates the men from the boys is a component’s ability to render resolution and refinement. Following this analogy, I’d recognize the DAR as the polite teenager, falling faithfully between two extremes. What this means is that out of the box, don’t expect the DAR to impress you with a bag of audiophile tricks. Sure, you’ll get exceptional soundstaging, but it won’t be an impressive wall-to-wall presentation that spans beyond the confines of your listening space. What you can bank on is very precise instrumental and vocal placement across the soundstage. It’s always solid, and always well defined. Listening to Diana Krall’s Live in Paris gave me the familiar sense of air and spaciousness I’ve come to know from the recording. Audience claps and coughs, for better or worse, rang in clean and clear – even during those quiet, late night listening sessions. The DAR’s excellent micro dynamics allow you to enjoy the music without having to turn up the volume. From Jazz at the Pawnshop to Fritz Reiner and the Chicago Symphony Orchestra’s performance of Mussorgsky’s Pictures at an Exhibition, the DAR captured all the details and nuances within the discs and rendered all the elements with Naimlike ‘PRAT’.

The most salient attribute of the DAR is its sheer ability to communicate the music in such a way that appeals to both our audiophile side and that of the music lover within. The common conundrum with this hobby is that as you begin to ascend the hi-fi food chain, the ruthless nature of many high-resolution electronics ends up tearing apart the recordings/music that we once enjoyed. The DAR delivers enough resolution to instill a solid reminder that it is a high-end piece, and does so without smearing over the frequency extremes. Topping this off is a fairly neutral presentation that complements every genre of music.

Part of this feat can be attributed to the balance of treble, which limbos between forwardness and softness. It has just enough edge around transients to portray convincing bite, without falling too far into analytical territory. The good news is that you get to enjoy a high end that will only suffer a case of the sibilant woes on the worst of recordings. The downside is that to achieve this happy medium, there has to be a bit of sacrifice in terms of ultra frequency extension.

As you’d expect from any component with glass under the hood, the DAR has a rich and immediate midrange that gives you a slightly warm perspective into the music. Chock full of air and tone, the DAR is able to deliver a sense of timbre that is well beyond what I’ve come to expect from a class A/B amplifier in its price category. Woodwinds in particular carry just the right amount of weight, tone, and resonance. The ability of the DAR to maintain a sense of warmth without sacrificing transistor-like clarity and precision is something I wish I heard more of in today’s crop of affordable gear.

If there is one aspect of the DAR’s performance that caused some initial disappointment, it was the bass response. The reason, you may ask? I was utterly spoiled by the H2O separates. After a small period of re-adjustment, I developed an appreciation for all the virtues of the DAR’s bass. Not only did it integrate seamlessly with the midrange, but it was also respectably full and agile. It had absolutely no problems handling quick and complex string and synthesizer passages. In fact, the only thing missing was a sense of believable scale and dynamics, which leads me to…

If you’re looking for a component that is ultra transparent and carries “tell it like it is” street cred, you’re better off looking elsewhere. If you want lifelike scale, and thirst for massive dynamic swings, ditto. Although the DAR is able to rock and roll, it is not a powerhouse, and unless you’re running very efficient speakers, it won’t have the horsepower to bring your walls down.

Subjectively speaking, the only nitpick I can volley against the DAR pertains to its top end. Perhaps I’ve come to prefer a more refined and polished top end through my travels, but at times, I felt that the highs sounded a bit rough. While it is not inherently fatiguing, this rough around the edges feel detracts from what is otherwise great top to bottom performance.

Last, I never warmed up to the binding post terminals. I find it frustrating whenever an amplifier in this price class lacks a true five-way binding post. This can become a major inconvenience for those with banana terminated speaker cables.

Gilbert did not build the DAR to win over self-proclaimed “golden ears.” He built the DAR to reach the heart of the music, all the while maintaining the key elements that keep a discriminating listener satisfied. If you are in the market for a versatile and affordable integrated that does not compromise the luxury of enjoying your entire music library, the Blue Circle DAR should be at the top of your short list. Highly recommended!