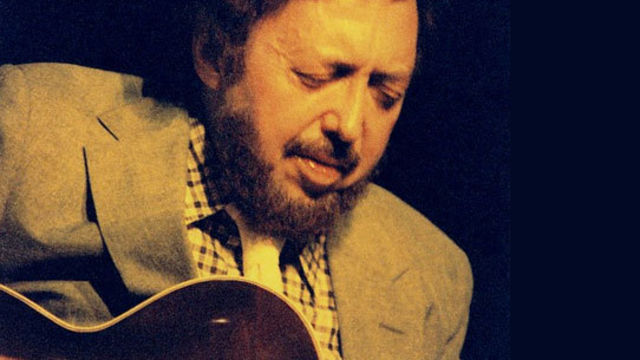 If you listen to almost any jazz or pop record from the 1950s and many from the 1960s, you will in all likelihood hear the distinctive guitar of Barney Kessel. From Julie London to Billie Holiday, from Frank Sinatra to Ricky Nelson to the Beach Boys, Barney was there. One of L.A.’s “first-call” studio guitarists (who also included stellar players like Howard Roberts, Jimmy Wyble, Dennis Budimir, Tommy Tedesco, and others), Barney’s distinctive sound and overall musicality and professionalism elevated him to the pinnacle of players, who had the respect and awe of any number of players on the music scene, and is still remembered today as one of the giants in jazz.

Born in 1923 in Muskogee, Oklahoma, the son of Russian Jewish immigrants, he picked up the guitar quite early in life. By age 14, he was the only white musician in a black dance band. His entire musical outlook changed when he met and briefly studied with fellow-Oklahoman Charlie Christian, widely acknowledged as one of the early pioneers of electric guitar playing. Charlie’s style, thanks to the effects of amplification, was more that of a horn player. Longer lines could be played thanks to the electric guitar’s enhanced sustain (the ability to hold a note or notes for long periods of time). Like Christian, young Barney was strongly influenced by tenor saxophone player Lester Young, and modeled his playing style after “Prez”. Barney left Oklahoma for Los Angeles in 1942, and got a job with the Chico Marx big band, and began making contacts in the music industry. He worked with a number of big bands through the 1940s, gaining a reputation as a fine and reliable player. In 1944, he played in the movie short “Jammin’ the Blues”, with Lester Young among others. As he was the only white player (as was often the case during Barney’s early career), he was placed in the shadows and had dark makeup applied to his hands. Even in L.A., Jim Crow was alive and well.

While still playing the jazz clubs in and around Los Angeles in the early 50s, he began a second career as a studio musician, which allowed him to not only feed his family, but to do so in style. In 1952, he joined the Oscar Peterson Trio, with Peterson on piano and Ray Brown on bass. He stayed with them for several years until his heavy studio schedule made it increasingly difficult to play the clubs or tour on a regular basis. He left the trio in 1956, handing the guitar chair to another fine player and part-time studio maven, Herb Ellis. As the 50s progressed, Barney was the “house guitarist” for the Norman Granz labels including Verve and Clef, recording with jazz greats like Lester Young, Billie Holiday, Charlie Parker, Art Tatum, Ella Fitzgerald, and countless others. He also began doing more rock and roll dates as the 50s progressed, but hated every minute of it.

In 1955, he and Ray Brown, playing under the pseudonym of Ray Leatherwood due to contractual issues with another label, recorded what for many was considered to be the ultimate guitar/vocal album, Julie London’s My Name Is Julie and the big hit from that album, Cry Me A River. Barney showed guitar players a whole new way to accompany vocalists–a style that was quickly copied by his peers.

He began recording as a leader on the Contemporary label in the late 1950s, and won numerous magazine polls as top guitarist, and top small group leader. He eventually named this small group The Poll Winners. Working with The Poll Winners, and other jazz performers helped him keep his creative edge just as the mind-numbing studio work seemed to try to destroy his creative spirit. In the early 1970s, he finally had enough, and left the studios for good, to be a full-time jazz guitarist. He toured the world, recorded countless albums for countless labels, and was successful enough that he remained a touring jazz musician for the remainder of his working career. Along with the Contemporary and Verve labels, he also recorded extensively for Concord Jazz and Black Lion.

He co-founded the Great Guitars of Jazz with fellow guitarists Herb Ellis and Charlie Byrd, and toured and recorded (on Concord Jazz) extensively with them. When Charlie Byrd had other engagements, Barney and Herb toured together.

I saw Barney in Fort Lauderdale, Florida at the old Bubba’s jazz supper club in 1983, when he was touring with Herb Ellis. I had always heard he didn’t like to chat with the patrons, so I didn’t try. One of my friends was less shy about it than I was and walked over and told him that I was the nephew of an old friend of Barney’s, former Gibson clinician Andy Nelson. Barney immediately came over and joined our party. He nursed a cup of coffee during the break (he did not drink when performing), and I found him to be the most unmusicianlike musician I had ever met. Most musicians (and yes, maybe this is a stereotype…) seem to be off in their own little world. Not Barney. He was a man of the world, knowledgeable in many topics including finance, politics, and world affairs. He had very definite opinions on each of them–something anyone who has met Barney can attest to. Break over, he went back and played the rest of the set–part with Herb, part solo, and part with Herb doing a solo thing. The audience definitely got their money’s worth that evening. 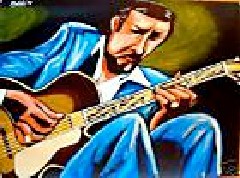 Barney was also known for his outlandish wardrobe. He often got himself “out front” by arranging with his fellow players, such as Charlie Byrd and Herb Ellis with the Great Guitars, agreeing to wear a conservative business suit. When they all met up to do the show, there was Herb and Charlie in the agreed upon suits, while there was Barney in some wild Hawaiian print. The folks in the audience were not about to forget Barney Kessel!

He was a funny guy when it came to his guitar. Gibson built him a custom ES-350 model in the late 1940s, with a single-coil pickup identical to the one found on Charlie Christian’s 1937 Gibson ES-150 model. He kept and played that same guitar for the rest of his career. Because the road takes its toll on instruments, it had been repaired and restored so many times over the years that he had his guitar tech remove the Gibson logo from the headstock and claimed the guitar had been so heavily modified over the years that it was no longer a Gibson. Plus, and perhaps more to the point, he had an endorsement deal with Gibson in the 60s that in his view didn’t go very well, where Gibson marketed a “Barney Kessel” artist model that was unsuccessful in the marketplace, though it remained in the catalog for over 10 years. In the 1950s, he endorsed an artist’s model guitar for the Kay company, but Kay was always a second-tier maker, and aside from the curiosity value (Kay guitars from that era were definitely products of their time, with wild design, including a headstock that was often referred to as a “Kelvinator” because the plastic cladding looked more like it belonged on a refrigerator than on a guitar).

Sadly, Barney’s later years were not good ones. Just four months after marrying his fourth wife, Phyllis, he suffered a massive stroke in the early 1990s that affected his ability to move and speak, though he did teach a bit, which brought some money in. Then in 2001 he got the devastating news that he had an inoperable brain tumor. He lingered for another three years, passing away in May, 2004 with Phyllis at his side.