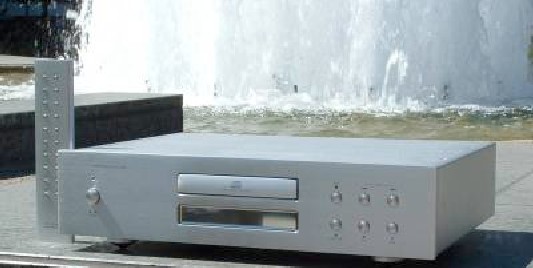 No, this article isn’t about Tony Soprano’s strip club, nor will you get whacked if you read this. And it’s definitely not an Italian-American euphemism designed to attract your attention (OK, well maybe it is).

Actually, “bada bing, bada boom” is used to express an easy situation from its beginning to its end without divulging the details. For instance, “I bought these speakers from Guido’s girlfriend, hooked ‘em up, so I got music now – bada bing, bada boom.” The title is certainly suggestive of this review for a Bada HD-22 tube CD player because the sound went from “blah” to “bing!” and from gloom to “boom!”

Bada is a Chinese manufacturer with a highly recognized brand name in the Asian audiophile community. This unit is the “export” version of the HD-22, so it uses better parts than the HD-22’s intended for sale in China and Asia. It uses a single 6N3 vacuum tube, the same tubes used in Shanling’s $2,000 T100 CD player.

Originally, I was going to get a Jolida JD100, but decided to roll the dice on this less expensive unit. I was hesitant, at first, because this unit did not come with a manufacturer’s warranty and I was unfamiliar with the brand. Plus, there was very little information in the Internet about this CD player.

The HD-22 has a single tube (6N3) and two outputs – one for tube stage and the other is for the transistor stage output. When I initially purchased the player, I switched inputs, but did not realize any differences between the two, although more experimentation is needed.

The first thing that struck me about the Bada was its weight. At approximately 18 lbs., the Bada is a heavyweight among affordable CD players. Even before I hooked it up, I peaked underneath the hood and realized why the Bada weighed so much. It is solidly built, with two torroidal transformers. With a thick extruded aluminum chassis, Solen capacitors, HDCD capability, and a Phillips transport mechanism, the Bada was certainly built to deliver the goods. The face plate is clean and understated, and the CD tray appears well engineered. I also like the feet; they are shaped sort of like an inverted pyramid and they have a small round, rubber ball on the bottom for isolating vibrations. It’s a nice touch. What’s even more impressive is the aluminum remote control that weighs about a pound. 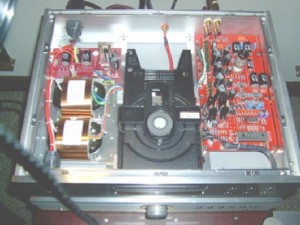 So how does it sound? In a word, “extraordinary.” The HD-22 replaced a Cambridge Audio Azur 640C CD player, a great player at its price point. Even though the Bada is similarly priced, the 640C was simply outclassed by the Bada in every conceivable category. The other components in the chain included a Jolida 502A tube integrated amplifier and Tyler Acoustics Reference Monitors.

I was stunned at the greater level of improvement I heard from the Bada. Everything sounded better – detail, musicality, soundstage, etc. The Bada provided a magical sound presentation flowering with palpable emotion. The HD-22 seemed to capture every nuance of the performance – even the faint clinking of silverware in the background during live performances. In fact, I could tell what the couple at table 6 ordered for dinner (OK, maybe I’m going a bit too far).

I could bore you with countless other adjectives to describe the sound, but let’s just sum it up by saying the Bada exceeded my expectations and helped me to appreciate what good music is supposed to sound like.

The Bada simply delivered more music, and it was teeming with the level of excitement of a live performance. Instead of sounding slightly muddled and disjointed, the instruments and voices were conveyed with rich texture.

The more I listened, the better it got, but I wanted more. That’s when I took the CD player to Verastarr in Marietta, GA to get it modded. One reason I took it there is because they also modify the Jolida JD100 CD player, so I got a chance to hear my stock CD player vs. a modded Jolida served up with a Jolida integrated tube amp. Not surprisingly, the Jolida sounded better.

The folks at Verastarr replaced two pair of RCA outputs with rhodium over silver plate Cardas Audio jacks, rewired internally with teflon-insulated pure solid core silver-covered copper wire, replaced the diodes in the power supply with Fairchild Stealth ultrafast soft recovery diodes, and damped the inside of the chassis, transformers, and transport with copper damping sheets.

Once it was finished, I got a chance to hear my modded HD-22 against the modded Jolida. I was surprised once again – I couldn’t tell the difference between the two units! At the time, I still had the stock Chinese tube in my unit and the sound was identical on my technician’s rig. Once the tube was replaced with a GE 5670, the sound immediately catapulted to another level altogether.

When I switched out the stock tube with a GE 5670, everything sounded brighter, but not bright (there’s a conundrum for you) – the bass was tighter and less muddy, the highs soared, and the detail was absolutely stunning. I was floored by the results. Even my wife was impressed (and that ain’t easy!).

I considered myself taking a risk by purchasing the Bada, but what I got in return was a great reward. The Bada is definitely a winner. Despite the price, consider yourself stepping firmly into high-end territory.