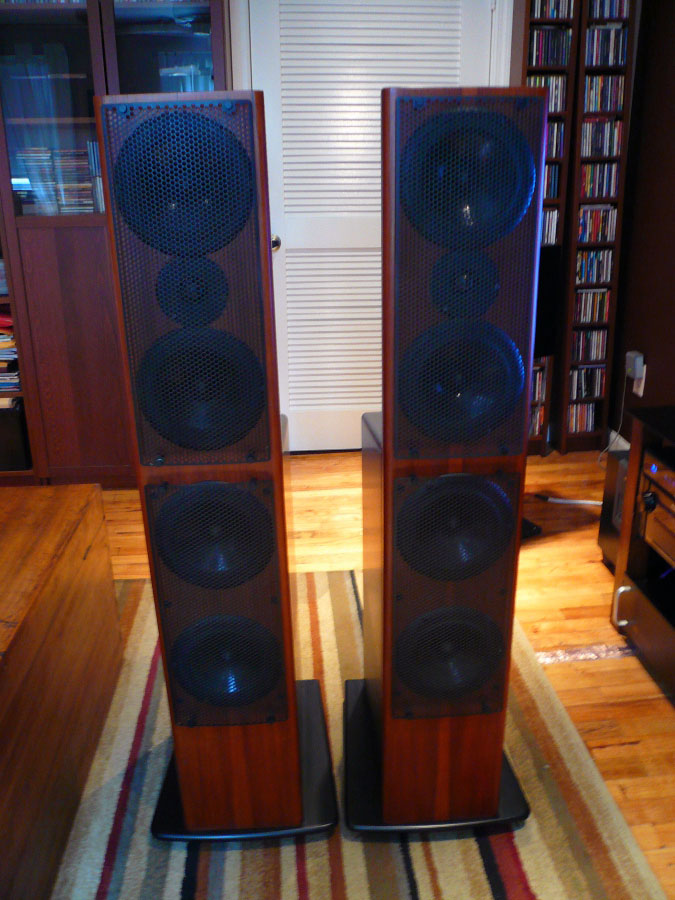 What happens when you give a manufacturer a well-deserved great review? You get sent more gear to listen to! In Issue 41 I honestly smiled my way through the review of the x-omni mini-towers by AV123. They broke the rules of loudspeaker design, something I enjoy seeing, which makes me somewhat of a rebel especially being an engineer by trade. Fittingly, on 65th anniversary of D-Day I got my first listen of another rebel, the Mark L. Schifter/Danny Richie designed x-statik open baffle floorstanders.

Now, open baffle isn’t anything new in audio, but in the under $1000 price range, it has few cousins. The concept is simple, why let the cabinet dictate sound, especially in the mid and upper frequency range. Let the drivers breathe the wide-open spaces of the room in which they are placed.

The x-statiks can best be described as the shape of a lower case “b” appropriate with the bass box taking up the lower half of the speaker. The open baffle upper actually keeps the speaker looking visually smaller than it actually is. One should not be fooled, the x-statiks are quite substantial, and rock-solid. The review pair came in a simple satin black finish that keeps them from standing out in a room. For those desiring a wood finish, the x-statiks can also purchased in Moho or rich cherry veneer. Each speaker contains four 6.5in Peerless India drivers mounted vertically. Two in the lower bass cabinet, and two in open baffle MTM layout. Between the drivers is an India one-inch fabric dome tweeter. 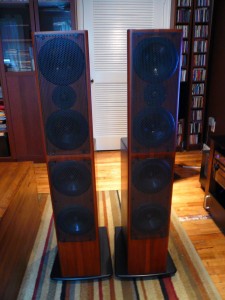 The key to any good speaker design involves maximizing the sound output via proper matching of speaker components. Right now, one of the very best designers is Danny Richie. He can coax more out of a set of drivers than just about anybody. It’s all due to understanding proper driver matching for the design and being willing to use the very best crossover component within the budget. The result; speakers that measure and sound better than what normally is expected of them.

Like all x-series speakers the x-statiks use a rather heavy-gauge steel grill speaker mesh grills. To protect the open baffle upper MTM design, the backside is grilled as well. It should keep little hands, and paws from tugging on the wires.

The x-statiks come with four brass spikes that should be attached once final positioning has been confirmed. In the case of this review, positioning took all of an hour, followed by a couple of days with the spikes attached. I found that in my listening space I actually preferred the speakers without spikes, the every so slight increase in loose bass was worth the added richness it imparted on the midrange frequencies.

I paired the x-statiks up with three amplifier sources during the review: my vintage Yamaha CR-840 receiver, a friend’s Cambridge Audio 640v2 integrated amp, and the Underwood modified PS Audio C100 integrated class D amp, courtesy of A$$A’s founder. The source unit is the Cambridge 540v2 cdp. Recently, I was conned into buying The Best of Don Williams Vol. 1 & 2, and I’m glad I did. I didn’t grow up listening to him much, but his voice is country music’s equivilant to Frank Sinatra and Nat King Cole. It’s both relaxed and distinctive, with terrific resonance. The x-statik’s do a nice, if slightly tight presentation of his vocals at low volume, go above 80db and the chestiness of Williams country twang begins to reverb in the sweet spot. 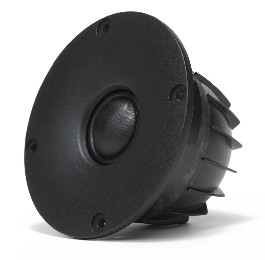 What the x-statiks do so very well for the $1K price is pinpoint the vocalist, both male and female. It’s dead center and right at the height of cabinet change over to baffle. A perfect example is “I’m Just A Country Boy”. Don Williams was at his very best on slower tempo recordings. The pressure of the initial syllable of each phrase the x-statiks give off a slightly breathy push from the aforementioned precise point. The solid state Yamaha receiver and the Cambridge 640v2 offered a slightly richer presentation than the class D modified PS Audio, but the x-statiks enjoyed the speed of what the ICE chips brought to the table.

Like many I have a tendency to listen to groups/individuals for a week or two at a time, then move on. Lately, Supertramp has been getting some fairly heavy playtime with both Crimes of the Century and Breakfast in America. The one thing that Supertramp recordings do very well is to present a very wide dynamic range. The x-statiks, true to their maker, Danny Ritchie, plays the entire spectrum of its range very evenly. This allows for a very smooth presentation of “The Logical Song” among others.

One thing about listening to rock music on the x-statik’s, just when you think you have them figured out, they surprise you. Cold Play’s Viva La Vida album is full of challenges for many budget speakers. The recording is layered with a variety of sounds, some very clean, while others slightly distorted. In essence, it sounds like a live recording, making in more difficult to individualize instruments and location. The x-statiks’ ability to play evenly across the spectrum may fool many into thinking that the disc is one-shot recording, without mixing. Instead, I’ve come to believe that the band itself is such a true democracy that each musician gets equal representation. The track “42” demonstrates the fairness. The electric guitar melody and keyboard each get their say. The key for the x-statiks is quickly moving from one instrument to another with hangover. This is another hallmark of a Danny Richie speaker, and much appreciated with such blended music as Cold Play offers the listener.

Being floorstanders, classical music fans want to know what the x-statiks can do with the great composers. First off, one must remember that the x-statiks only go down to 50hz, though the bass response it does give is well represented, and personally, it sounds like the low 40’s. Listening to Tchaikovsky’s Nutcraker Suite one rather warm morning (Christmas in July), the bass cello’s deepest note could not only be detected, but more importantly, enjoyed.

As for the balance of the classic presentation, the string plucking and notes plinked on the triangle are wonderfully pure-sounding. As is the flutes in the “Nutcracker”, as many speakers in the $1k category have a tendency to make the flute sound especially breathy, thus missing the actually strength of the note itself. The beauty of the harp solo in the eighth track followed by the rich French horns and clarinet/oboe sections are outstandlingly reproduced. 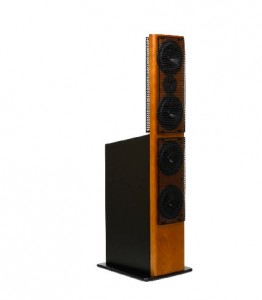 The x-statik’s soundstage is comfortably natural. Nothing is forced upon the listener, nor held back. Recently, I read where a speaker was described as organic, that word truly describes the x-statik’s. Music just flows from them with little effort. I described their smaller siblings, the x-omni’s as “fun”. The x-statik’s better fit the term “naturally confident”, Nothing musically could rough them up. Even the warmth of the Onix SP3 integrated tube amp couldn’t cause these floorstanders to go mushy in the bass response.

The x-statik is a speaker that one truly has to nit-pick to find flaws for it’s price range. One thing is just a touch of graininess can still be heard among non-electric instruments. When I first heard the x-statik’s at the home of A$$A’s founder I was able to compare them to a pair of $4000 monitors. Melissa Etheridge’s raspy, gravely voice came out a bit strained and more two dimensional on the x-statiks in comparison. But for $3000 less, I’m sure many listeners like myself could comfortably live with the all the upside they offer.

Most speaker reviews in this price range end up talking about a pleasant emphasis of one or two areas in the spectrum. In the case of the AV123 x-statik, that just isn’t the case. Instead, one must look at the speaker design as a whole. Due to the inspired work of Danny Richie, the x-statik speakers offer a fine, consistent performance across the spectrum that it reproduces. The old adage, do what you can well, rather than trying to do everything seems to be the mantra of the x-statiks. The A lot budget audiophiles like to say that certain $500 speakers sound as good a thousand dollar pair. Well, I’ve been listening to such a thousand dollar pair, and all I can say is listen to the x-statiks first, then compare. The x-statiks are simply put, hypnotic. 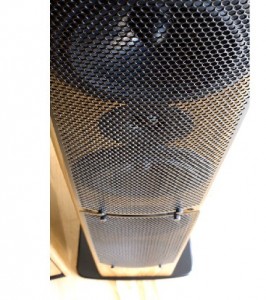 Thank you for a wonderful even-handed review that truly captures the spirit of what Danny and I were after with this speaker. I know in many cases I make Danny a bit crazy with my nits and picks but we are probably “the better” for it… 🙂 I would also like to point out that the true design partnership that I have with Danny on the “acoustical side” of the design… I also share with my “tried and true” dear friend Santiago Chavarro on the esthetic side… Santi’s incredible work really pulled this product from napkin (olive oil stained at that) to a reality… Both he and Diego Congote (our Industrial Designer in Cali, Colombia) really brought this product and the kernel of my best thinking to life… I’d like to honour them with this mention please…