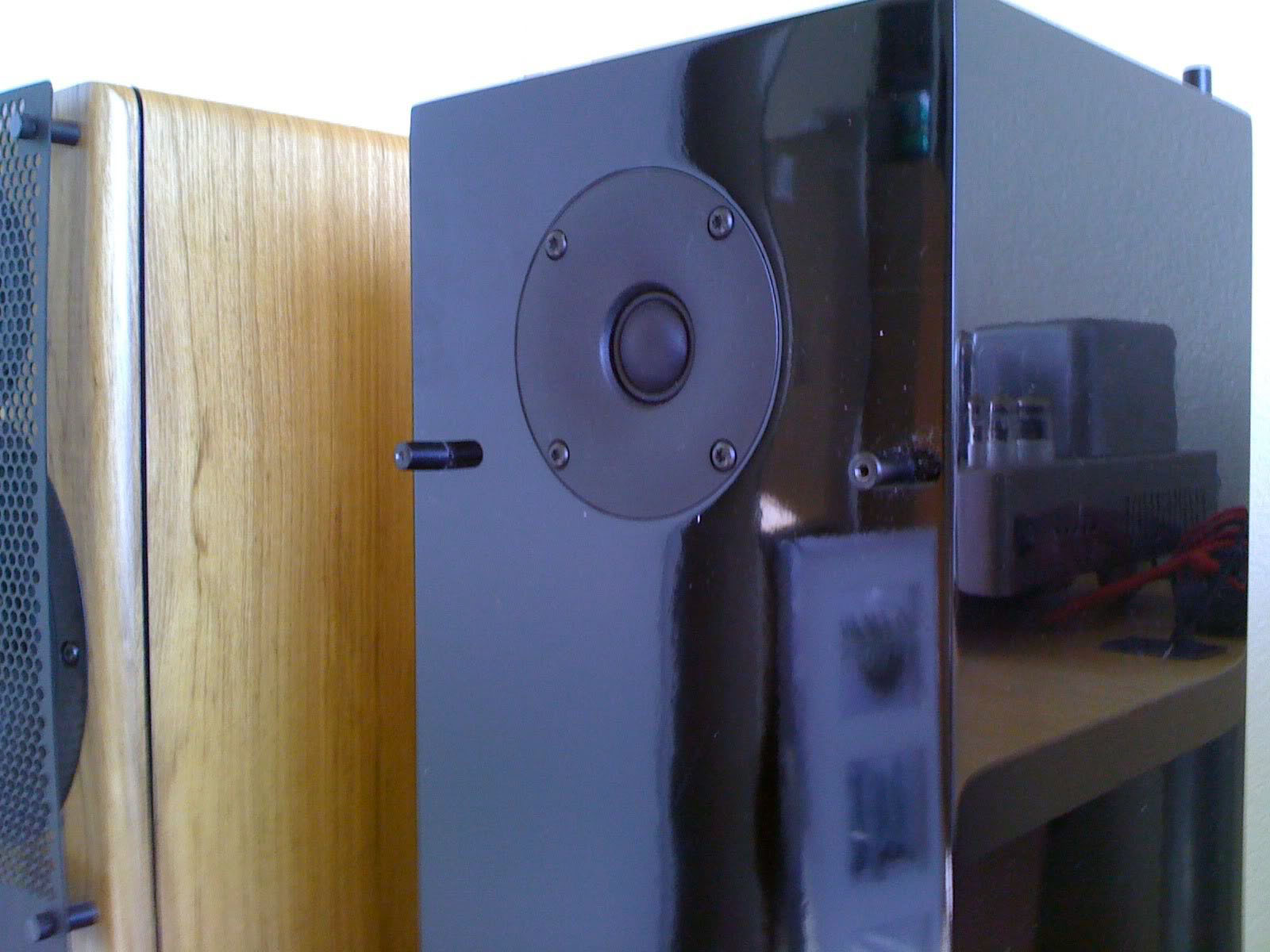 Last month I got a call from our publisher, Mark Marcantonio. “You up for some fun, Dan?” Well, when comes to audio gear, I’m always ready for being entertained. But a little voice in the back of my head told me that Mark had something up his sleeve and I should prepare myself for anything. In the living room stood a pair of black mini-towers with the oddest-looking grill. Since the sunlight was streaming in behind the speakers a back lighting effect took place keeping me from being able to accurately figure out the design. A wire mesh grill came down the front just 5 inches from the front, but at the top bent 90 degrees to cover the entire top. The music from Journey’s Greatest Hits was playing and I could feel the forward push of the quite impressive sound. Yet I could not see where the driver was located. And there, under the mesh facing the ceiling was 6.5 inch driver. I was truly intrigued and knew I had to pry these satin black sentinels away from Mark.

What I was hearing and seeing was the twisted creativity of Mark L. Schifter, founder of AV123, playing outside the box of audio logic. I’ll admit that as a kid I had a bit of a fascination with a pair of Ohm Walsh speakers that belonged to a buddy’s dad. It never made sense to me how a speaker playing downward into a box could sound so good. I resigned myself into accepting that the laws of acoustics had some black holes that just could not be explained. So here I was, way too many years later trying to comprehend another black hole. For the next few hours Mark and I spun a number of discs trying to logically solve this anomaly without resorting to looking at the AV123 website. The best answer we came up with is that MLS just couldn’t resist making the listener think.

After unpacking and setting up the speakers in my listening space, I went to my computer and looked up the x-omni on the AV123 website. Now, if you never read one of Schifter’s ad copies, it flows like a Sears catalogue from about 1900. The only thing missing was the famous phrase “Send No Money”! I thought for sure that the secret would be revealed, but no, instead MLS leaves the reader dangling with only the mystery words “Sonic Alchemy”. What does that mean? Is there krypton woven into the drivers or something? Obviously, I needed answers, but unfortunately MLS’s health had taken a nose-dive along with other issues and I might not get answered before the review is published. Therefore, I’ll leave any further theories and answers to the end of the review. 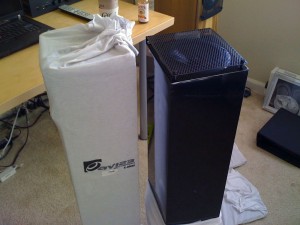 Other than the driver placement the x-omni is a standard mini-tower design, 36 inches high without the base, 8 inches wide by 8 inches deep. Construction is of .75 inch MDF board. The review pair as mentioned above came in a satin black that allows for the wire mesh to disappear. It also adds to the visual part of the sonic mystery. The base is mounted via four pre-drilled screws. Four brass spikes with mounted receptacles can be screwed into place by hand. 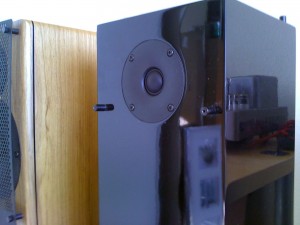 The base offers tremendous improvement in stability and the five minutes to install both is a requirement by any owner. The tweeter is a one-inch fabric dome that has been treated. It is mounted at the top of the front baffle. The driver is of a paper construction that has been treated with a satin sheen compound. The metal grill is just that, metal, of a fairly thick gauge. It is held in place by way of two screws on the bottom front corners as well as two on the top back corner. A single two-inch port sits above a single pair of appropriate quality binding posts near the bottom of each tower.

My listening space consists of a great room that is 21 feet in length and 14 feet wide. It is divided into a sitting and office area. The ceiling height is 10 feet, which creates much more volume for any speaker to fill. There are three windows all of which have fabric draperies to soften the sound waves. The floor is carpeted. Final placement was 29 inches from the back wall. Distance between the speakers was eight feet, which allowed for a balanced placement distance between the side and rear walls. I did find a very slight toe-in maximized the sound quality for my listening position. 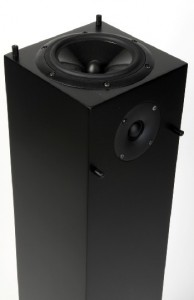 I started my listening session with a mixed disc containing most musical genre’s. Over three days I came to the conclusion that the x-omni’s played best with “traditional” rock music. After watching an episode of Sixty Minutes I’ve become quite a fan of Cold Play’s latest offering Viva La Vida. Maybe it comes from the same, though more upbeat background music in their songs as my favorite band of my youth, Rush. Whatever the case, the xomni’s provide a very pleasant forward punch. Not as much as the Paradigm Monitor 7’s I reviewed several months ago, but comfortably forward and appropriate for rock music.

It isn’t just the bass that pushes out into the room, but the mid frequencies as well. Cold Play’s keyboard work doesn’t sit back and bounce directly vertically off the ceiling, it actually projects toward the listener. After spending many hours each day listening to them (I work from home), I began to suspect that the tweeter overlaps the mid driver by quite a large range thus allowing for the forward projection of sonics. I listened to the tweeters and compared them to my current pair, and yes, it did seem as though the x-omni tweeter did drop down the frequency chain to 1 Khz, but this is only speculation on my part.

Over the next several days I listened to a wide range of my rock collection. In virtually ever instance I found a very consistent presentation. Most appealing was music recorded prior to the evils of massive dynamic compression. Even In The Quietest Moments, in my opinion Supertramp’s most underrated album, the subtle instrumentation allows the x-omni’s the opportunity to create a nicely open stage giving the music the width it needs, especially the title track.

The song “Lover Boy” starts off quietly, but like many of Supertramp’s offerings, it builds up energy, and makes some significant transitions. At approximately 2:45 into the track there is a lull, followed by a significant kick. The dynamic extension requires a fast driver or the sound muddies quickly. The x-omni’s don’t lag where many speakers in this price range would. In addition, about a minute later after a pause the drums kick in along with the lead guitar playing in a lower octave range. This is where the tweeter needs influence and separate the two instruments with secondary sonics. The x-omni does this without a hitch.

At $549 a pair, the x-omni’s like all speakers in this price range have limitations. Female vocals came off a bit sweet in the mid frequencies. Diana Krall’s voice lacked the last bit of sultriness, the pitch was tilted upwards a bit. This became more noticeable as the volume moved up into the 80db+ range. I’m guessing this deals with the crossover tweaking necessary to make the vertical firing driver blend better.

If you read MLS’s description on the AV123 website about the x-omni, you’ll read that he brings his enthusiasm to a crescendo in discussing the speaker’s capability in it’s usage with home theater. Not wanting to miss such an opportunity I did setup the x-omni’s as my fronts in my 5.1 system. One of my favorite movies of the past ten years October Sky with a great many outdoor scenes, along with the mechanical sounds of a coal mine I thought it would provide a solid challenge to the x-omni’s. True to MLS’s word, these mini-towers make movies a great deal of fun. With the top firing drivers, the placement of sounds in the room is terrific. The oncoming train as the boys panic and run to stop it one scene, is perfect. I backed up the disc twice to make sure of what I was hearing, I could place the train and it’s whistle coming from behind the screen. Later in the movie, during a scene in a coal mine, the echoes of voices, feet, and equipment once again had outstanding placement.

This has been an extraordinarily fun review to write. Even though I didn’t have all the specifications or information I would want, the fact that I had to think my way thru the “mystery”, the x-omni’s are just what Mark Schifter says they are, “fun”. For home theater buffs, these mini-towers bring a whole different and positive game to the show. I look forward to hearing MLS’s explanation, and maybe a crack at hearing the x-statiks in the future.