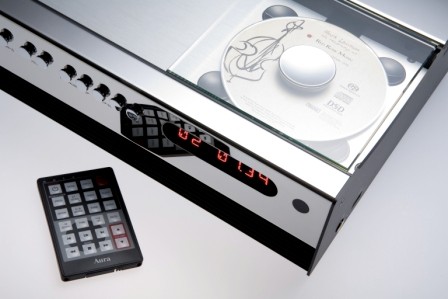 Over the years one thing could be counted on in audio, exterior designs were consistent enough that even the most non-audio person could identify the rectangular box. That is until Bang and Olufsen came along with their sleek Scandinavian designs. The low profile, brushed aluminum and rosewood vinyl rectangles with hidden control panels brought a cult following and more than one urban legend about a home being burglarized but the B&O left behind because the thief had no idea of what it was. Unfortunately, that design is only available on the used market now…. 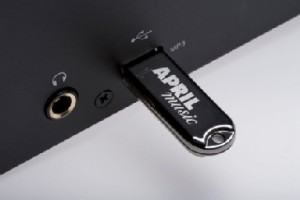 Until this past February, when April Music unveiled their Aura Note, a small, squarish, and slightly taller all-in-one unit. The design is truly reminiscent of B&O heyday of design, with a few changes. The designer, Kenneth Grange of the United Kingdom states:

The design philosophy behind the Note is to follow the ideology of simple, well-engineered products where the function is clear to see and the controls are easy and direct in use. The use of glass – one of the world’s most common but beautiful products is to allow the clarity of purpose to be enjoyed and to appreciate the strength and value of this material.

For one, there are no hidden panels, A series of 8 round, raised steel buttons run across the shiny left side of the front panel with black lettering below each one. To the right is a wide oval display with large red letter/numbering. The LED display has four levels of brightness and an off setting that can be used via the remote. This is a small, but significant feature that recognizes that owners will have different lighting situations. Very bright offices with large windows need a brighter display to fight past the glare.

The partial glass top is actually a sliding cover, each edge has a slight bevel to assist in keeping fingerprints to a minimum. A weighty stabilizer knob sits on top the spindle, just lift, place the disc, and reset the stabilizer. The cd motor mechanism is very quiet, no doubt due in part to the weight of the stabilizer.

The back of the Aura Note, unlike its B&O inspiration, is quite standard. From left to right are two pairs of higher quality five-way binding posts. An auxiliary set of RCA inputs, and a USB (square) input for music stored from a PC. Next is the AM and FM (75 Ohm) antenna connections and the switchable AC cord receptacle.

Finally, on the right side of the Aura Note is the headphone jack, and a standard USB socket, that ca be used with an external hard drive, memory sticks and MP3 players as long as the music is encoded under MP3, WMA, and OGG file formats. Obviously, this leaves out some popular formats. Hopefully, this can be resolved in future software releases. 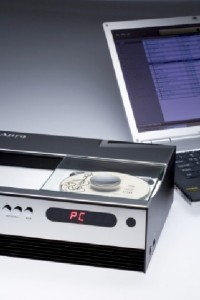 Hardware is only part of the story of the Aura Note; software makes up the balance of this little dynamo. Just about every possible feature was plugged into the unit. Picture a bunch of engineers, marketers, and dreamers in a room, writing up every feature they’d want to have, that’s what the Aura Note comes out as a finished product. It works in a bedroom as the ultimate alarm clock stereo, including waking up to your favorite piece of music, but skip the thought of Bill Murray in Groundhog Day. It can also be programmed as a sleep timer for up to 90 minutes, something I used a couple of times. Using the CD or USB input, a single track or all tracks can be repeated. During listening sessions I used the A/B Repeat capability numerous times with different lengths of repetition. The display will identify tracks from CD or USB input repeating every 10 seconds. The display can also show total time remaining in the song or disc.

In addition, songs can be recorded onto the USB memory device from the CD using the 128kbps MP3 format. Now, I would never use this feature personally for long-term music storage, but as a way to see if new music was something that I would want to buy, absolutely. The same thing can be done from the tuner. If you know that every day your favorite radio station has live acoustic shows from artists that are in town that you rarely get to hear, the Aura Note is your solution.

One of the coolest features is the search capability. Let’s say you have a 120 gig external hard drive loaded with music. You’re trying to find Bittersweet by Big Head Todd and the Monsters. Normally, you would need to run it thru your computer to find the song. The Aura Note has the capability to search by both track number (say 086), or alphabetically by using the search buttons in a specific sequence. That isn’t all, if your music is set up in genres, the Note can also search for just classical tracks.

The Sound of Aura Note

Much of my review time took place in a guest bedroom, with the balance of the time split between my wife’s home office, our bedroom and living room. Since I believe that a strong target market for the Aura Note would be office systems I chose to bring out of the closet the big sounding but diminutive Totem Dreamcatchers in Mahogany veneer. The visual match was stunning. The choice proved to be a wise one, as the Aura Note had no problem driving the 4-Ohm, 86db mini-monitors. Other reviews have noted and I whole-heartily agree that the Note does not present a dry, transistor sound. I would compare it to that of Harman/Kardon, a nice hint of warmth. Volume was quite clear well above my normal listening level, something I found quite impressive. 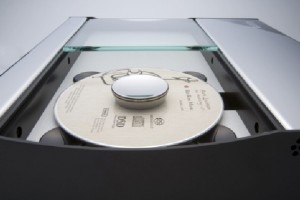 I listened to FM radio for only a short period, as unless I’m in a car, it just isn’t a part of my listening routine. The tuner did just fine picking up all the local stations that I would normally check out. The CD player is a fine performer, it managed to play a very scratched up demo disc that had spent months under the seat of my car. It offered up the same micro details as my Onix XCD-88. It was quick to pull up track info and search points.

Where I really wanted to focus was on the USB music server capability. I started by creating a memory disc full of country music for my wife to listen to while she worked in her office. In reading over the manual, lossless file compatibility was not an option. Therefore, I ripped a bunch of music at MP3 320 kbps. At an average size of 10 megs, the songs did suffer some lost audio quality but nowhere near the abomination of 128kbps. I programmed the Aura to random and let my wife experience the Note. She thoroughly enjoyed her listening time, especially when the various lawn mowers were running in the neighborhood.

How does the Aura Note handle larger speakers? For a short period I had a pair of Paradigm Studio 40 v2’s on hand. The 40’s are about the largest monitor sold anymore, though they are typical of Paradigm in that they are amazingly efficient at 92db. Phil Collins has been heavy in my rotation lately, especially his second solo disc, Hello, I Must Be Going. The Aura Note powered the 40’s with ease, providing a clear, though not the ultimate in power as compared to my reference Onix SP3 integrated tube amp. But that isn’t a fair comparison. The point is, the Note does a fine job for what it’s designed to do. I found it to be equal to my vintage Harman/Kardon HK 680i receiver.

The Aura Note is seriously cool, but a true audio fan wouldn’t place it as their ultimate man-cave rig. It truly is designed for offices, bedrooms, or situations where space is limited. It does so many things incredibly well, that the term nit picking reaches a whole new level. I wish it had the capability to support Apple’s lossless format. But I’m betting that the left side on the top will eventually house a built-in server hard drive, as all the necessary software is in place.

A personal pet peeve of mine is labeling font size, below the buttons with the shiny steel finish the font just isn’t bold or big enough to fight off the glare. The remote could be a little larger, but it is well labeled so that is a personal criticism. 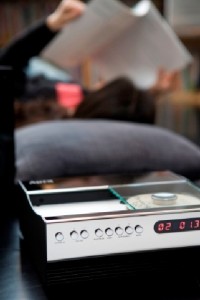 Recently, I attended a dinner held by Mark L. Schifter of AV123. Without going into details, he believed that the audio market was on the edge of a whole new technological movement. After spending the past few months with the Aura Note, I do believe he is right. This smallish piece of gear is the first complete sign of the new level of integration of audio. Others have come ahead, but never with the fullness of detail and matching of hardware and software. The Note’s sound quality is right there with other separates that when assembled into a rig at this price range. The built-in amplifier can handle a wide variety of speakers with outright quality sonics. The Aura Note is definitely a member of my Best Of 2008 choices. If you’re looking for a simple, yet elegant solution that produces great sound April Music’s Aura Note may just be the only shopping you’ll need to do for an all-in-one setup.