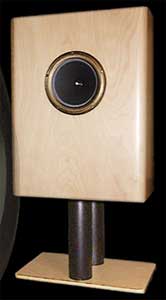 WHILE AUDITORIUM 23’S SOLOVOX IS NOT EASY ON THE WALLET, IT IS WORTH THE INVESTMENT.

Don’t let the architecture fool you. This speaker’s got a lot of power behind its meager exterior.

Keith Aschenbrenner of Auditorium 23 located in Frankfurt, Germany, stands out. Early on, Keith discovered the magic and majesty of earlier designs which have left their mark on him both as a music lover and audio designer. He’s best known in Europe for his well reviewed Rondo loudspeaker, his modifications of the Verdier turntable, and his step up transformers. My guess is that his relative anonymity is the U.S. is about to change with the introduction of the SoloVox loudspeaker, the first component in his new Homage Series.

The SoloVox is unlike any speaker you’ve come across. It’s a stand mounted open baffle design. The stand is integral to the speaker, but unlike other similar designs, the stand is hollow and is not to be sand filled or deadened in any way. Whereas a conventional speaker has six exposed sides, the SoloVox has fourteen exposed ‘sides.’

The speaker sports not merely an open back (which allows you to look directly into the back of the driver), but beautifully curved side vents which channel (but do not amplify) part of the back wave to the sides of the speaker.

Unlike his earlier designs, including the Rondo, the SoloVox can be set up near the back wall. I found the speakers sounded their best in my room about 30” from the rear wall and about 7” apart from one another.

Because of their design, the SoloVox are very sensitive to set up. Placed too close together, male voices will seem too chesty and reverberant. This effect also disappears with break-in. Placed too far from one another and the sound becomes a bit unfocused and ethereal. I’ve heard it with both an 8 watt 300B SET amplifier and a 13 watt EL84 push/pull amplifier – both to great effect.

The fit and finish is superb. The wood veneer is flawless (the speaker is available now only in a light oak finish); the wide front baffle features curved corners as do most of the wood pieces of which the remainder of the ‘cabinet’ is constructed.

The SoloVox features a single PHY-HP driver. As implemented in the SoloVox, the driver makes absolutely no attempt to cover the entire frequency range. Output falls off precipitously above 12KHz and has little output below 40-50Hz (Another widespread misconception is that full range drivers cover the full audible frequency range. They don’t – certainly not with equal output top to bottom).

The SoloVox is a 15 ohm speaker that’s roughly 96dB sensitive. It’s a very easy load for an amplifier.

With the exception of Fostex (and Radio Shack), full range drivers are very expensive. In addition, full range drivers take a near eternity to break in. They hardly move when playing music which means that the surrounds rarely get a workout and so they have to be played nearly constantly for hundreds of hours before the drivers loosen up. The PHY is no exception

After all, some designers are capable of turning cow’s milk into vintage wine, while others can prepare sushi grade tuna as flavorful as rubber. Full range drivers are no exception to this rule either.

The SoloVox is by a large margin the best full range driver speaker I’ve ever heard, and I’ve heard many.
What makes the SoloVox so special? A number of things actually: above all else, however, is the SoloVox’s natural, unforced way with music. The music comes across as completely independent of a speaker system. This illusion is essential to the musical experience.

Other speakers have the character of being immediate, transparent and present. In the case of the SoloVox, it is the music which is immediate, transparent and present, not the speaker. The speaker behaves as if it is not there at all. Part of the magic must be that the SoloVox is a full range crossover-less design. Another part is that there is no amplified back wave passing through a horn. And part of the magic is the open baffle, resonating ‘cabinet.’ Everything is designed to work in sync with the music.

The SoloVox is a very misleading speaker. There is ‘so little’ of it. No cabinet, no crossover, one driver per side. But it is designed like a fine musical instrument. It’s a very complex and difficult speaker to build.

Every piece of wood has to be finished just right, curved in just the right way, distanced from every other piece in just the right way, and so on. If anything is off, the parts simply will not work together. That makes it even more amazing that Aschenbrenner pulls it all off in a way that makes the end product look simple and uncomplicated- It is anything but.

Music played through the SoloVox is not only natural, unforced and effortless- it’ s rich, full, detailed and resolute. The speaker displays a tonal neutrality and accuracy of timbre that I’ve rarely experienced in other speakers, regardless of price.

The SoloVox is not designed to excel on large scale classical music or heavy metal. It’s not the ideal speaker for fans of Mahler or Metallica. It doesn’t flatter such material.

The SoloVox doesn’t create the majesty or energy of large scale classical music, but it does present it ‘to scale,’ and ‘in balance.’ I don’t feel cheated listening to large scale classical music on the SoloVox; I’m just not riveted. The key to the SoloVox is balance: balance by limiting its extension at both ends of the frequency range; tonal balance; dynamic balance – that is, dynamic consistency from top to bottom (within its audible range).

I have one other observation to make that may be puzzling to some and controversial to others. The SoloVox sounds much better with vinyl than with digital – no matter the quality of the digital source. I’m not the only person to pick up on this disparity. Other reviewers and listeners who’ve heard the speaker with both digital and vinyl agree.

For what it’s worth, my interpretation is that the SoloVox displays digital as the incredibly processed medium that it is. Digital clashes with the SoloVox’s essential nature. Analog, by comparison, fits the SoloVox like a glove. This is not to say that digital doesn’t sound good through the SoloVox. It does; it’s just that digital sounds, well, digital. If you want to hear all everything SoloVox is capable of, you’ll need to spin some vinyl – which I would recommend under any circumstances.

Set up correctly, which is easier on the body than normal given how light the speakers are, the SoloVox are not only among the best speakers you’ll ever hear, they might teach you how to listen to music and what to listen for. The SoloVox have changed how I listen to music. This is a speaker that not only pays homage to the great speakers of the past, it does so in its own unique way; it doesn’t atte mpt to relive or revive the past so much as it learns from the past and puts its own stamp on an approach to music making that should never go out of style.

Even at the somewhat princely sum of $9,500.00/pair, it’s a bargain as it beats nearly all musically important dimension speakers three/four times its price. And just to let you know- I bought the speaker.