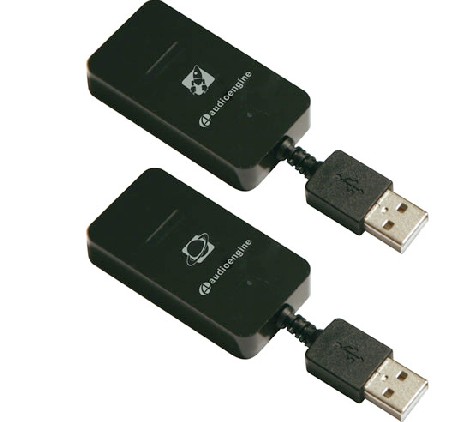 Is there nothing the USB cannot do? This little rectangular male/female connection has changed how we work with electronic items. Its ability to plug in and out on the fly makes it easy for even the most non-techy individual to use with comfort. iPods and now cell phones now recharge their batteries via USB instead of a separate port. Unfortunately, the traditional audio world has lagged behind in adopting USB into it’s equipment designs. Luckily, in the past year due to the pressure of computer-based audio, mainstream stereo manufacturers are including USB ports into their products.

One company, Audioengine has always been ahead of this curve. Their A5 powered speakers were designed to work using wireless communication from ideally an Apple Airport Express. The A5’s have been a terrific hit and have become the standard for many in this arena.

Recently, the gang at Audioengine took on the challenge of broadcasting music wirelessly using the general concept of Bluetooth. Out came the AW1, a two-piece USB design (not including the wall wart power cord), with designated Sender and Receiver units. In typical classy Audioengine fashion, they also include different mini-jack output adaptors, one a male-to-male cord going from iPod or other mp3 device to the input jack of the Audioengine W1 Sender.

To gain the necessary distance of 100 meters Audioengine enlisted the help of Avnera to design an 802.11 protocol that would meet the design goals including 100 feet of range and 92db of signal to noise ratio. In selecting a specific closed protocol Audioengine avoided interference problems with other broadcast units. As Brady B. explained the research process in an email exchange:

We tried out many different wireless chip suppliers over 2-3 years and didn’t like any of them until we were introduced to the system we’re using now. Our goal was to make a product that sounded as good as wired audio, but with really easy setup in a small package. The main advantages of AW1 are the form-factor (USB dongles for the transmitter and receiver) and USB power so you can use any USB power supply to power the product or our A5 powered bookshelf speakers, which have a USB charge port built in.

The features that make this system better than most wireless products currently on the market are the ease of setup, fixed low latency, audio quality, lack of dropouts, and high interference tolerance all the good stuff that’s needed for a product like this to be of any real use.

Just to let you know about the transmission protocol, we transmit uncompressed PCM audio over an 802.11 network, using a closed protocol specifically designed for audio. The features that make this better than most wireless systems currently on the market are the ease of setup, fixed low latency, audio quality, lack of dropouts, and high interference tolerance.

Version 1 Computer to Stereo: I first tested the Audioengine W1 out in my classroom using my laptop and stereo receiver. I plugged the broadcaster into one of the USB inputs, went into the “Sound” category in the System Preferences and selected AW1, and clicked ”OK”. That was it. On the receiver end I plugged the wall wart into one of the switched outlets on the back of the unit, used a supplied mini-jack to RCA cable and plugged in both ends to the appropriate jacks and the USB into the wall wart. Then I pressed play and heard the music of Colbie Caillet coming from the speakers.

Version 2 iPod to Stereo: this requires a bit more manipulation and creativity as one must remember the AW1 needs power at both the transmitter and receiver ends. I plugged the transmitter USB end into a USB jack on the laptop (for power only), plugged the iPod into the mini-jack of the Sender, and the receiver end stayed the same. Once again, music played without any technical gyrations. 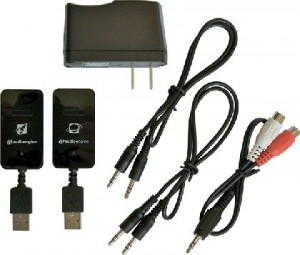 I figured that the broadcast distance would be about 90 feet maximum without walls. Not even close, the AW1 was still playing with full capability and signal at 98 feet and through a classroom wall, which includes two sheets of commercial grade drywall. In comparison, when I reviewed the first generation Sonos I struggled to keep a signal at 40 feet with an open wall.

My early experiences were all completed in my classroom, which consists of a Sherwood RX-4103 receiver and a pair of simple Dual speakers. The students were fascinated with the setup as they regularly request selection while in my computer lab. Seeing me change songs from a back table, away from the iPod’s normal location brought out all sorts of impressed reactions.

With this very basic setup I was hard-pressed to detect a difference between the AW1 broadcast and my hardwired comparison with my iPod. I was particularly interested in hearing the highs and low frequencies in order to spot any discrepancy. For most choices it was all but impossible to confirm any differences. Until I selected Donald Fagan’s Morph the Cat. With its tremendous bass and clear high frequencies, the wired setup was able to reproduce a greater frequency range and richness. But still, to my ears the AW1 sounds quite a bit better than FM radio.

In my main rig the sonic differences were more apparent, but let’s face it, the AW1 isn’t designed for fanatical listening sessions. Its goal is to bring music and movies into listening spaces where wires just aren’t a viable option. For those of us not privy to man caves or dedicated home theater rooms, the combination of the AW1 and Audioengine’s A5 or A2 powered monitors offer a terrific option for rear surround sound.

Once in a while I get in a product for review that is combines cutting edge, multiple uses, and ease of use that I know will be a huge hit. The Audioengine AW1 is just that product. It offers so much that it has the potential to open a whole new wave of gadget and uses. The gang at Audioengine have a winner on their hands, the next step is to create the various packages that can take advantage of its options. My students came up with several in just a few minutes: Portable wireless PA systems, 5.1 home theater for travelers, music system for company bbq’s, and my own idea of Audioengine selling a 4 or 5 pair speaker package for real estate agents during open houses.

The Audioengine W1 is in my humble opinion, a definite lure in bringing the audio hobby to the iPod generation. The combination of wireless connection and portability makes it my first choice of 2008 for Product of the Year.