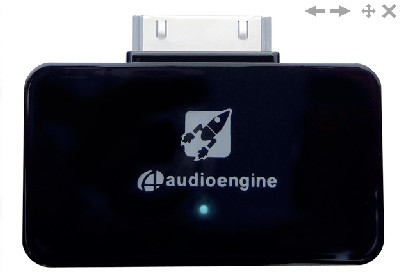 Some companies just like some people have it, a knack, an ability to hit just the right button at the right time. Making them the envy of everyone around them. My best friend has mojo, as does Apple Inc., BMW in this decade has ridden the mojo express as well. In audio, the call is much tougher, but I would like to nominate Audioengine for this distinction. The gang from one of the three places I like to live in America, Fort Collins, Colorado, have an absolute knack for hitting the bull’s eye on everything they bring to market, both in design and sales. Their first three products, the A5 and A2 powered speakers and the AW1 wireless transmitter, have received unqualified praise throughout the audio/iPod community.

The most recent addition to the Audioengine line up is the iPod-powered AW2 wireless transmitter and socket powered receiver unit. It is the answer to the one limitation the original (A$$A winning Best of 2008) AW1 had, that the transmitter needed to be plugged into an electrical socket after coming out of the iPod. This limited the AW1 from being carried around from one spot to another without contemplating where it could be plugged in again. 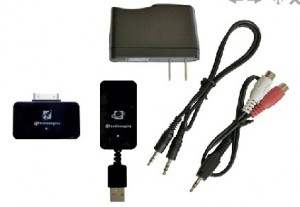 The AW2 kit consists of a rectangular transmitter, a wireless USB receiver, a wall wart plug, and a mini-headphone to stereo RCA female plugs. The transmitter is the same width and depth of the current generation iPod/Touch/iPhone (in or out of the iPhone’s airport mode). The AW2 also works with iPod Nano’s. I need to be clear on this: Older generation iPod’s and Nano’s unfortunately do not work, make sure to consult Audioengine’s website for compatibilty. At first, I thought this lack of compatibility would end my opportunity to review the AW2. But, since I’m a teacher, I had plenty of students who were more than willing to lend me their very new iPod to test the AW-2.

As I mentioned above, the tethered power requirement of the AW1 was it’s one limitation. Thankfully, the AW2 solves that problem; the engineers at Audioengine came up with a way to draw energy via the iPod’s dock connection port. Other products have figured out how to draw power, but not for the level of sophistication that the AW2 had in mind. Even more impressive is the advanced broadcast capability that the AW2 offers. It operates within the 2.4 GHz bandwidth, creating thirty-seven subsections to broadcast the signal in 2hz wide channels on two bands. The signal is split in half, thus protecting against signal loss. It doesn’t stop there, but I’ll spare you my explanation and encourage those interested to read all the well-explained technology in the “Specs” tab for the AW2 on Audioengine’s website.

Just like with the AW1’s, the AW2’s easily exceed their rated distance of 30 feet. With a constant signal. I was able to go some 80 feet before dropout occurred. That distance included two commercial-thick grades of drywall, and three cubicle dividers as the receiver unit was plugged in at just 24 inches above the floor. While using a borrowed iPod at home, our home received many calls on our 2.4Ghz cordless phone. Not once did the AW-2 drop the signal. The same holds true for the wireless router that I employ at home, and for that matter, the ones the neighbors use as well. 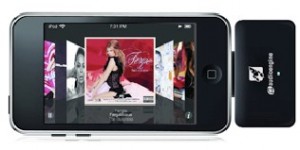 How does the sound quality rate, one word, exceptional! Using Apple lossless I could not detect any difference whatsoever, from a song played via AW2, or thru my own iPod hooked up through the headphone jack into the same preamp/amp combination. After several songs looking for differences over a few days, I gave up. No matter how hard I strained to detect a difference, I couldn’t find it.

I appreciate companies that use their initial success and build upon it, not with something totally different, but as a natural expansion of their current product. Audioengine has always been about using the iPod to create a wireless stereo system. They started with the A5 powered speakers in conjunction with Apple’s Airport Express. Then, seeing an opportunity to solve the signal dropout issue and build upon the wireless concept the AW-1 came on the scene in late 2007. Now with the AW2, Audioengine has completed the next step in creating a wireless music system. With an iPod in your pocket, and the receiver hooked into pairs of A5 speakers, one can have music in up to 8 rooms of a house. The AW2 is 21st century cool!