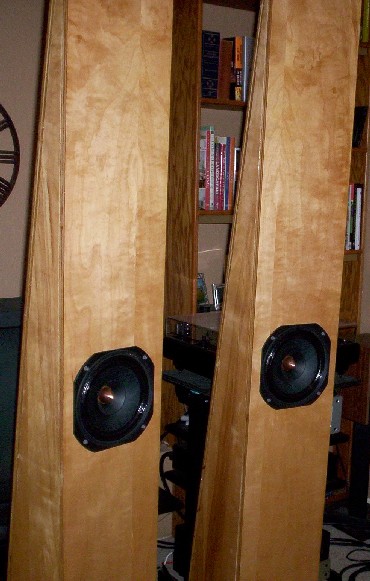 The Audio Nirvana Super Eight’s 8 inch driver is rated @ 95db for 1 watt at 1 meter. It is constructed with a paper cone, fabric surround and a heavy duty 51oz magnet assembly. Additionally, the Super Eight differs from the regular Audio Nirvana 8-inch driver in that is has a copper plated phase plug instead of a dust cap in the center of the wizzer cone. Its rated response is 37 hz to 20 Khz, with steep roll off below 100hz and above 19Khz. After reading John’s article regarding the use of a bass reflex enclosure with this driver, my son Chris decided to look for an enclosure design that would augment the lower frequencies that taper off from 95db @ 100hz to 80db @ 50hz. After scouring the web, he found a website written by Derek Walton providing instructions for making a simple Voigt Pipe for use with an eight-inch high efficiency driver. Chris decided this would be a suitable platform for Audio Nirvana’s driver, and since the Super Eight is capable of handling 50 watts peak music power, it would work well with his 25 watt receiver. He spent the next several weeks constructing the speaker enclosures from Baltic Birch plywood. We learned a great deal from Derek Walton’s website and we really owe him a great deal of thanks for the guidance provided therein!

The associated equipment used for my listening sessions consisted of my Sophia Electric Technology EL34 amp and my Denon DCM 370 CD Player. I used a pair of Discovery Plus Four interconnects between the CD player and the amp and a pair of Grant Fidelity 3.5 Meter speaker cables between the amp and the speakers. For the A/B speaker comparisons, I used my reference Paradigm S2 Monitors, mounted on their Target leadand sand-filled speaker stands. I set up both speakers equidistant to the listening position and toed in slightly, 12 inches from the sidewalls and 38 inches from the rear wall. All of my listening sessions took place in my 18’ X 15’ X 7.5’ main listening room. Additionally, I let the speakers settle in for about 20 hours before doing any critical listening.

Comparing these single driver speakers to the Paradigm S2 monitors is really not fair because of the huge differences in design and cost, but I placed Diana Krall’s jazz CD Love Scenes in the CD Player and played track 2, “Peel Me a Grape,” to gain a reference. This CD is an intimate recording, just Krall on piano, Russsell Malone on guitar, and Christian McBride on bass. With this type of music you can really hear the differences between good and excellent speakers. The Audio Nirvana speakers mounted in the Voigt Pipe enclosures sounded very organic. Krall’s voice had an air of sensuality and presence not usually heard at this price point, and McBride’s bass was musical, not bloated. This is very different from the typical box speakers most people listen to, in which the upper bass is often augmented by design to make up for the lack of heft that small drivers can produce. The voigt pipes allowed the Super Eights to breathe and flow with the music, which sounded crisp and articulate instead of slow and heavy. For instance, on track 7, “I Don’t Stand a Ghost Of A Chance With You,” Krall is accompanied only by Russell Malone on guitar. Malone’s guitar sounded very detailed; the plucked notes and chord strums were convincing and dynamic. Krall’s voice sounded smooth, breathy and intimate, just like it should. The Paradigm’s, in comparison, sounded more balanced and solid in the low end, but less immediate. I believe this is the reason there are many proponents of single-driver speakers, which tend to have a natural, unencumbered sound that is difficult to put into words.

One of my favorite recordings is on the Dire Straits CD Brothers in Arms, track 6 “Ride Across the River.” There is a lot going on in this recording: percussive elements, keyboards, guitar, drums and bass. On poor-sounding speakers, many of the subtleties are lost, and the sound is a cacophony. You miss the insect noises, the drums, and the delicacies of the melody. Even though the bass was less powerful than when listening through the Paradigm S2 Monitors, the Audio Nirvana’s Voigt Pipes conveyed the essence of the recording. Mark Knopfler’s guitar and vocals sounded clear and detailed, and the percussion was tight and dynamic. The cymbals and high hat sounded very realistic, if just a bit bright. The Voigt Pipes provided a large soundstage that placed the individual instruments with pinpoint precision throughout. 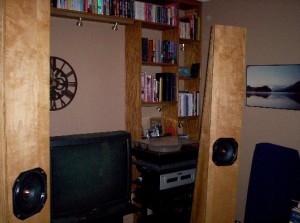 I recently picked up the Led Zeppelin CD Mothership, a compilation re-mastered and produced by Jimmy Page. It is a must have for Led Zeppelin fans, as it contains most of their greatest hits. The sonic quality is firstrate: these tracks in no way resemble those on the nasty, bright-sounding CDs from the early eighties. I played track 3, “Dazed And Confused,” from disc number one. Robert Plant’s voice wailed front and center with a texture and vibrancy I have seldom heard before. Jimmy Page’s guitar cut through the soundstage, filling the area left to right during his guitar solo. John Bonham’s drums extended from one edge of the soundstage to the other, but lacked some of the punch expected during a rock performance. John Paul Jones’ bass was tight and lively, if a bit too light for my taste.

However, the Audio Nirvana voigt pipes augmented the high frequencies, and did not provide the solid bass and percussive foundation that is necessary to successfully portray rock music. This recording sounded much better when played through the Paradigm S2 monitors, which presented a more coherent and balanced dynamic picture overall.

Where the Audio Nirvana voigt pipes excelled was in the presentation of quality jazz recordings. For instance, the Verve recording of Stan Getz and Joao Gilberto on the CD Getz/Gilberto, track one, “The Girl From Ipanema.” Gilberto’s rich and smooth voice warmly oozed from the speakers. Additionally, you could hear clearly as Stan Getz blew into his sax, the texture and attack of each note articulated in a way most speakers cannot convey. This excellent recording sounded beautiful, rich and warm through the Audio Nirvana Voigt Pipes. If you haven’t heard this recording, I recommend it heartily. It is a jazz standard that everyone should have in his or her collection! The Paradigm S2 monitors, in contrast, had better balance top-to-bottom, with greater sense of soundstage depth and presence. They were less forward-sounding, without being harsh or lifeless.

The Voigt Pipes provide an excellent vehicle for the Audio Nirvana Super Eight driver. The single driver speaker design, which negates the need for a crossover, seems to couple the amplifier electrically to the speaker in a way that is not possible in most twoor three-way designs. The natural way it will convey a good recording is scary!

The downside of this type of speaker is that one driver cannot adequately reproduce the audible frequency spectrum from 20hz – 20khz with equal efficiency. Designers have built complex speaker enclosures to try and deal with this issue, but there are always drawbacks. For instance, the voigt pipes my son made stand over six feet high, and although they have a small footprint, they do make a strong visual impression. In other words, they have a low spousal acceptance factor!

These speakers make a great do-it-yourself project. They’re very efficient, so they will work with low-powered amplifiers. To get decent bass response, you must drive them fairly loudly. Additionally, you will have to be selective about associated equipment and recordings. Since the Audio Nirvana Super Eights boost the mid and high frequencies, they will be very forward in a lively room, with bright amplification or poorly made, bright recordings. For a cost of about $300.00, though, this is a great way to try a single-driver design to see if it is something that works for you. Good luck and good listening!

I’d just like to say that the rolloff below 100 Hz, that Todd mentioned, is the plot taken on a ‘test baffle’ and not in an actual cabinet. This would be restored to a ‘flat’ response when mounted in a well designed enclosure.

I’d also like to mention that we prefer bass reflex cabinets, though our drivers work well in bass horns, transmission lines, open baffles, infinite baffles, and hybrids like the Voigt Pipe. But I think there are very good reasons why 99.99% of all speakers ever made are bass reflex.

And, finally, we’d like to say that Audio Nirvanas, in well designed bass reflex cabinets, are-indeed-fullrange with flat response from about 40 cycles to above the limits of human hearing.