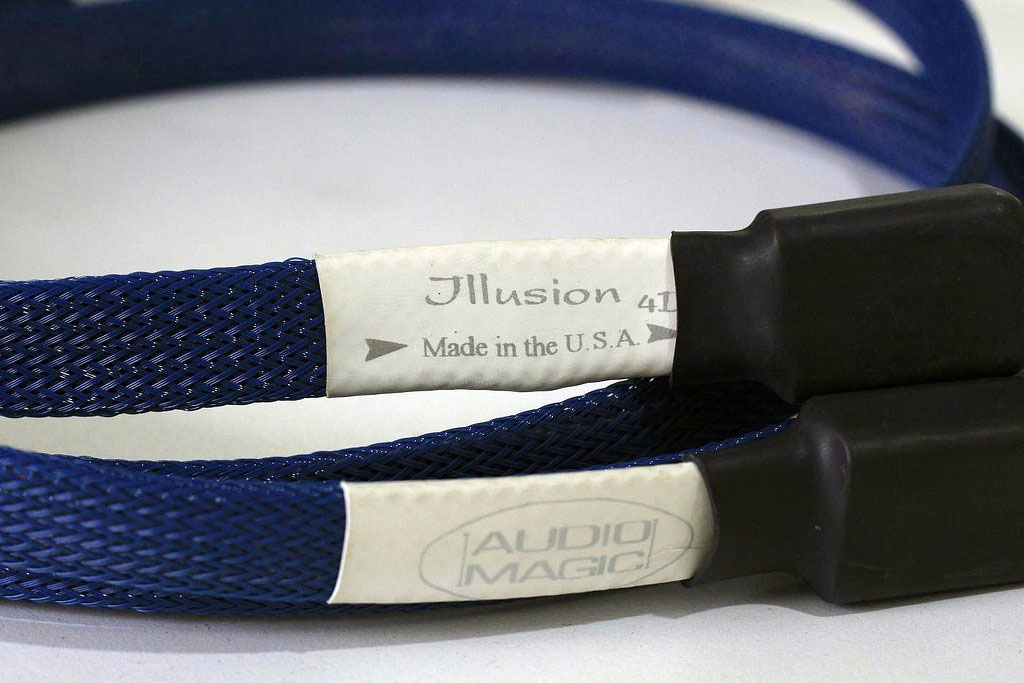 Audio Magic has earned a reputation for being one of the premier cable manufacturers in the world of audio. Jerry Ramsey started this company in the early 1990’s, and has specialized in the development of silver ribbon cables. Over the years upstart cable builders have made a dramatic entrance into the audio world, but slowly fade away as the hype of their new design dies down. Yet Jerry stays the course with Audio Magic, and continues to refine his silver wire designs long after other companies have moved on. The majority of Audio Magic cables are hand crafted, and the assembly process requires a large investment of time. Jerry chooses to forego high volume manufacturing and instead concentrate on producing a high performance product that is at the forefront of his field. This has been a successful strategy, noted by the fact that Audio Magic cables have always been highly regarded by discriminating audio enthusiasts.

Last year I decided to replace the cabling in my system so that I could address a set of limitations that I believed were related to the wire I was using. I suspected that the Tara Labs Air 3 interconnects and RSC Master speaker wire was responsible for an artificial infusion of warmth and midrange bloom. While pleasant to listen to, I needed to remove these anomalies, and refine the tonal balance of my reference system. In the past, I have owned a wide array of cables, which spanned from entry level to mid tier wire. The best cables I have owned were from TG Audio, which also used silver wire conductors. This predisposition to silver wire, coupled with a positive experience with the Audio Magic Extreme cables left me open to the possibility of trying a high-end wire. I placed a phone call to Audio Magic, and after a pleasant conversation with Jerry, he arranged for an audition of the Illusion 4D cables. Jerry built an 8-foot run of speaker wire and two sets of RCA terminated interconnects. These cables were then placed on a cable cooker, and then spent several days on a load bank before being shipped off. This a service that Audio Magic offers to all their customers, which eliminates the majority the sonic issues that come up during the traditional break in period that a new cable undergoes.

Not all silver wire is created equally. The raw wire Jerry uses in his products is produced to his specifications. The upper tier cables in the Audio Magic line-up are built from 4-nines silver that undergoes a slow draw manufacturing process. This method of wire formation results in a dense and uniform crystalline structure in the wire. Forming wire this way is time consuming, and inevitably drives the cost of the finished products upwards. While this first step results in a high quality raw wire, Jerry uses two other treatment processes to refine this material. The wire is then subjected to cryogenic and MST treatment. These processes address different issues, but both treatments result in a wire with a denser molecular structure. The combination of the slow drawn annealment process and the molecular level treatments results in a raw material that is superior to the silver wire used in other entry level silver cables.

The Illusion 4D interconnect uses a silver ribbon center conductor. A five hundred strand OFC copper with Litz geometry is used for the ground leg. Jerry uses a non-shielded design in this interconnect, as he believes the shield will adversely effect the sonic characteristics if the wire. The RCA terminations are the highly regarded Eichmann Bullet Plugs. On the Illusions 4D interconnects, Jerry installs a set of passive components that he refers to as “Signal Lock”. This is a proprietary design that is aimed at combating current eddies and phase issues created by the signal passage. The outer cover is a Teflon mesh, and Jerry has chosen to use an air dielectric configuration for this design. Jerry also hand polished the silver wire before final assembly in order to remove any impurities that may have come in contact with the wire during the various stages of handling that the wire passes through during the manufacturing process.

The Illusions 4D speaker cable uses a 1.5” wide silver ribbon wire on the positive and negative legs of the cable. Custom built spade lugs, or banana plugs are available for termination. These ends are a copper base metal with gold overlay. The overall design of the Illusion 4D interconnect is carried over into the speaker wire layout. This cable is a non-shielded design, with an air-dialectic. The speaker wire has a matching Teflon mesh outer sleeve, while Teflon beads are packed between the conductor and the outer cover. While the Signal Lock components are used, there is another set of passive noise reduction components built into the tail of the cable. In order for this speaker wire to function properly, it is critically important that the directional markings on the cable are followed. Once again, the wire is hand polished before final assembly.

I decided to use a two-step evaluation process, so I began with the Illusion 4D interconnects. One pair is placed between an Electra-Print PVA pre-amplifier and a pair of Electra-Print 300DRD amplifiers. The second pair comes off an Audio Magic Kukama DAC, and feeds the PVA pre-amplifier. In the second step, the speaker wire is added to the system, while the interconnect cables are kept in place. The second half of the review is an evaluation of a complete Audio Magic cable system.

In a perfect world, audio cables should be sonically invisible in a system. While this can be achieved, it is an expensive proposition to reach this point. The Tara Labs Air 3 retail for $350 a meter, and reside in the mid-tier level of the cable hierarchy. With the Illusion 4D interconnects in the system, the colorations induced by the Tara Labs cables become clearly evident. The Audio Magic cable has an even tonal balance across the audio spectrum, while the Air 3 has a pronounced midrange and accentuated bass response. These differences are clearly evident when I played “Things Ain’t What They Used To Be” by Dave Gruisin. [Homage to Duke; GRP Records GRD 9715] The Audio Magic cable kept an even tonal balance to the piano registers. While the Air 3 interconnects clearly accentuated the middle registers. A muted trumpet solo in the middle of this song also demonstrates the basic differences between these cables. When the Illusion 4D interconnect is in the system, the trumpet has a realistic position in the soundstage, yet is still presented with a large amount of fine detail. The Tara Labs interconnect places the trumpet out in front of the other instruments, and rounds off the edges off the melody. These two cables clearly offer a different presentation to music. The Tara labs Air 3 is a romantic sounding cable, which is pleasant to listen to. While the Audio Magic Illusion 4D is an evenly balanced design that gets out of the way of the music. 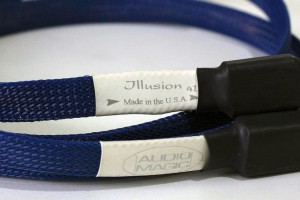 The Tara Labs RSC Master Gen 2 speaker wire is an older product from Tara Labs, although it is still highly regarded by proponents of solid core copper cables. The current offerings from Tara Labs use the same basic wire geometry, but offer incremental refinements to the overall design. With a MRSP of $630, the RSC Master should also be considered a mid-tier cable. There are significant differences between these two speaker wires. The performance gap is even greater than the one between the interconnect cables. The RSC Master speaker wire has a smooth and warm presentation, but in the process loses a significant portion of inner detail. The Illusion 4D speaker wire and interconnect shares the same sonic character, and builds upon each other’s strengths when used together. The Audio Magic cable system presents a massive amount of fine detail that is embedded in the music. Lucia Hwong presents a mesmerizing audio tapestry in “Children of Johkan Temple”. [House of Sleeping Beauties; Private Music 2006-2-P] This song is a mixture of electronic and acoustic instruments that are blended into an unusual style of music. The Illusion 4D cable system throws a huge soundstage with cavernous depth. The instruments are holographic in nature, and occupy a believable position in the soundstage. Individual instruments are highly detailed, yet the integrity of the mix in this recording is preserved. In contrast, the Tara Labs speaker cable glosses over the subtle detail, and presents a flatter soundstage. The differences between these two speaker wires are not subtle, and the Illusion 4D speaker wire is undoubtedly in a different class than the Tara Labs.

The Illusion 4D cable system has one notable liability. The price of admission for the Illusion 4 D line is steep, and could deter the many an audio enthusiast from auditioning them. A set of interconnects sell for $1200 a meter, while $2900 is needed to buy an 8’ run of speaker wire. Advocates of high–end cables often take a position that interconnects and speaker wire should be placed on equal footing with any component within a system. In light of what I heard from these cables, I would take this point a step farther. Unless a reference level set of cables are used, it is impossible to accurately evaluate any equipment changes in a system. Too often audio enthusiasts chase the “cable dragon” and swap out one mid level wire combination for another set of wires with a different character. These enthusiasts are hunting for that elusive system synergy, but have to start over whenever a new component is added. So hundred of dollars are spent on cables that eventually get sold for a loss, or banished to the closet within a couple of years. I propose that it makes sense to purchase one set of reference cables, even if they are more expensive then many of the components that comprise your system. By using this approach, the audio enthusiast will know the true performance level of the current components, and can accurately assess any future candidates.

The Audio Magic Illusion 4D cables clearly outperformed the Tara Labs wire in every imaginable category. This cable system excels in every facet of audio reproduction. The Illusion 4D wires are transparent, have a neutral tonal balance, and reproduces the finest details embedded in a recording. Jerry Ramsey’s cable building skills are clearly evident, and he has crafted a high performance product. The sonic prowess of the Audio Magic cables supercede the basic construction characteristics that many people would try to use to explain the abilities of this wire. These differences go beyond the typical silver versus copper conductor debate. Discussions about wire geometry do not adequately describe all the differences between the Audio Magic and Tara Labs cables. In short, there is not one defining construction technique to this cable that an audio enthusiast can point a finger at and say “this is the secret ingredient of the Audio Magic cable….”. The outstanding performance of Audio Magic cables is due to the accumulated knowledge that Jerry Ramsey has gathered over the years of honing his craft. The Illusion 4D cables are some of the finest wires in the marketplace that are still within the financial reach of most audio enthusiasts. While I would not argue that these cables are expensive, I will say that I believe that the Audio Magic cables are a worthwhile audio purchase. As a matter of fact, I chose to post my Tara Labs wire on Audiogon, and send them off to a new owner. The Illusion 4D cable system is my reference wire.

from aﬀordableaudio,  By John Hoffman