Four ASUS products have been awarded the International CES Innovations Design and Engineering Awards for 2008 by The Consumer Electronics Show’s Innovations Awards Team. The four products that were awarded are Eee PC, the P527 cell phone, and the ASUS Internet Radio and the R50A ultra mobile PC (UMPC). 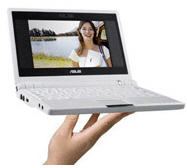 The 7 inch and 2lb mobile internet device Eee PC makes mobile computing easy to learn, work and play. With its easy to use graphic user interface, it has over 40 built-in applications. The ASUS Eee PC has a rich network and wireless connectivity. It also has a durable and shock proof solid-state design.

ASUS P527 Cell Phone has GPS enabled, compass and speed gauge in it. GPS supporting google earth format, let you know the appointment on time. With the help of Travelog and location courier application, one can share his travel route with friends. While the compass tells you the direction, the speed gauge informs you about the speed and also warns you when the speed exceeds the chosen limit. With the 802.11b and g connectivity, one can surf HTTP and WAP 1.2.1/2.0 from anywhere.

The P527 cell phone can be used as a mini cinema as it has MPEG compatibility. One cal also enjoy MP3s and FM radio. 2.0 megapixel camera allows you to take pictures with high resolution and clarity. With active access, the cell phone also receives up-to-date news and messages. Using the Business Card recognition feature, the user can scan card in a snap and save the information in Outlook. User can use the Word, Excel, PowerPoint, check emails and zip the files. The cell phone also works as a remote control for all the PowerPoint presentations.

Worldwide broadcasts can be listened on the Internet through ASUS Internet radio which has a buffer function which improves the sound quality. 10,000 worldwide broadcat stations can be accessed through the radio using a router. It uses 8Watts/hr of power as compared to desktops which use 60Watts/hr while listening to Internet Radio Stations. Supporting 8 Asian languages in the world, it can receive more stations in more languages when compared to other Internet radios.

ASUS R50A is the first UMPC offering webcam, GPS, 3G/3.5G connectivity and full notebook functionality. It makes the navigation simple by organizing software programs with mission-based application launcher. Using the built-in TV tuner feature one can watch favourite TV shows anywhere. The 3/3.5G connectivity enables the user to connect anywhere. One can capture video and photos anywhere with the built-in webcam and microphone. Since it has GPS in it, one can connect to Google Maps and know where exactly one is.