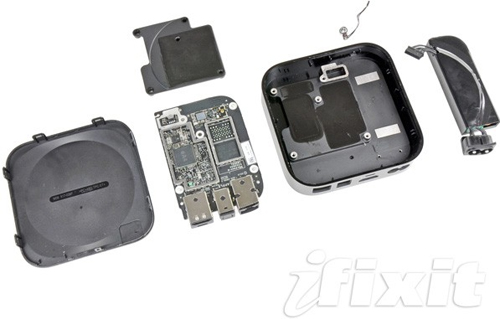 Apple has long been a leader in the portable media player industry with their extensive line up of iPods. While they have been inside the home theaters of some Apple fanboys with their Apple TV, they are set to make an even bigger mark with their forthcoming product.

This second generation Apple TV features things like the ability to rent 99 cent TV shows and access popular streaming service like Netflix. It even acts as a media extender by linking up with your Mac or PC to stream content to your television. Best of all, it’s only $99 which means it is affordable to pretty much any consumer.

Unfortunately, many have thought that the Apple TV is a less than capable device but today iFixit has torn it apart and shown us some hefty details. First and foremost it features 8GB of internal storage which means a future App Store is definitely a possibility. Additionally, they found that the innards are very similiar to the iPhone which has led thm to believe it’s just a repackaged iPhone.

Whatever the case may be the Apple TV is available now so go get yours today.