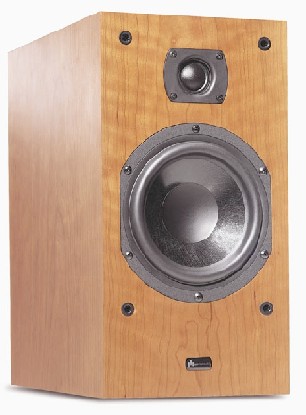 By now, most of you know that I have a bit of an infatuation towards monitors. Maybe, it’s due to all the years of moving my large Infinity RSa’s, then Polk 10B’s that make me appreciate the smaller size of today’s cabinets. To think of the room, not to mention energy I would have saved carrying something the size of a large bread box, versus the monster microwavesized cases of years gone by. The flexibility that they offer in placement, not to mention the WAF of their small visibility (stands not included), make them an ideal choice for many. Whatever the reasons, for monitor fans the choices have never been more varied, or better.

While returning the S8 subwoofer to Aperion Audio’s headquarters, I took advantage of John Wanderscheid’s good nature and gained possession of a pair of their highly regarded 632 monitors. Being a fan of real wood, I opted for the medium cherry finish. Like all Aperion speakers, the 632’s come in their signature purplish felt drawstring bag. The cherry veneer finish was flawless, as previously experienced. The 632’s dimensions give off a visually perfect rectangle. The grill is understated with an outward curve on the bottom edge, leaving a section of the veneer showing, something that I appreciated as a lover of beautiful grain.

Behind the fabric sits a simple, two-way design. The one-inch silk dome tweeter has the top and bottom of its flange trimmed off to improve dispersion. This should not be construed as a whittling away of quality, as the tweeter is ferrofluid cooled and has a quality heat sink, which, according to Aperion, lessens distortion.

The 6.5-inch driver is the pride of the 632. It is constructed using lightweight carbon fibers, making it quite fast, which is evident from the moment the music begins. The driver has plenty of flex, allowing for the deepening of bass response. Both the driver and tweeter are magnetically shielded for worryfree home theater placement. 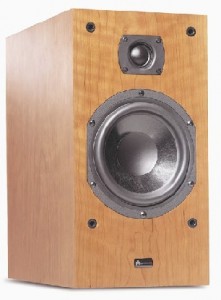 As with all Aperion speakers, the 632 come equipped with their patent-pending HD-X3 crossover technology. For those of you not aware of this nifty bit of techno wizardry, it levels the impedance load across the frequencies. Aperion states that this creates a “remarkably flat frequency response and eliminates the detrimental effects of resistance introduced by long runs of speaker wire”. A single pair of gold, five-way binding posts graces the lower portion of the back panel. A few inches above sits a tuned rear port.

In what is becoming quite common, the box is made of one-inch thick high-density fiberboard. This makes the 632’s cabinet both heavy and solid as a rock. Using HDF prevents auditory distraction of undesired resonances.

The Aperion 632’s spent several days in a closet with a blanket over them playing radio music at moderate volume. At various times, I cranked up the volume for 30-45 minutes just to let the cones flex a bit beyond its regular pace. Total time breaking in was somewhere in the neighborhood of 127 hours. 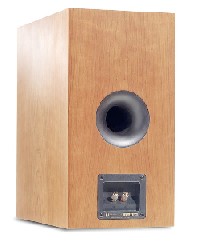 As is my usual practice, I started off with a casual listening session, playing Enya’s Watermark cd. I was impressed by the smoothness with a hint of warmth. The high frequencies were controlled and mellow. Something I greatly appreciate, after dealing with the din of school noise during the day.

After a couple of days of casual listening. I began my first critical session. In went my demo disk with its assortment of artists and styles. Each selection I picked based on criteria involving sound quality, distinctive passages, instrument selection, and vocalization. Once again the pleasantly subtle tweeters allowed for me to sit back and concentrate on other sounds. I see this as a breaking point between quality vs. flashy in speaker sales. As overly bright speakers have a tendency to make quick positive impressions, but fail in any lengthy test as the listener can begin to uncover the weaknesses in the middle frequencies. A good track for me to test this theory is Dire Straits Skateaway with it tambourine, cymbals, and high-hat shimmering throughout. The 632’s passed on the sound without any hint of stress or embellishment of frequencies. Even at quite loud volume the lack of hiss coming from the tweeter even when using the Adcom GFA 535 amplifier was a nice surprise.

Midrange dispersion and soundstage is very good with the 632’s. The xylophone in The Goodbye Look from Donald Fagan’s classic cd The Night Fly, radiated from outside the right speaker. I could perceive in the darkness of the room the actual distance difference between the bars of the instrument. 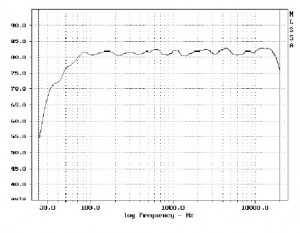 Acoustic guitars are recreated with a quickness that avoided the chesty ringing that can sometimes occur. I attribute that positive to the 1inch HDF, with such solid cabinetry the acoustic waves are dissipated quickly, allowing for the next set of sounds to make their mark known. 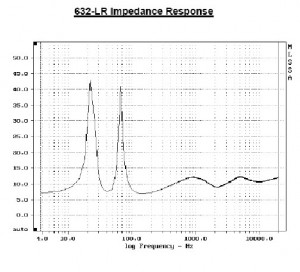 When it comes to bass response, the 632’s do very well for themselves. These are definitely not one bass note monitors. Aperion conservatively states a bottom of 46hz. I would venture to guess from my own listening selections and using the test tones from the Stereophile test cd, that the useable bottom is closer to 43 or 42hz. I base this on listening a couple of sessions with Donald Fagan’s latest cd, Morph the Cat, with it preponderance of both electric bass, and bass cello. Normally, such an amount of bass begins to fatigue my brain after about 20 minutes, however, once again the ability of the 632’s to quickly radiate and move forward made listening to this speakers/cd an easy proposition.

When it comes to vocals, the 632’s carry a slightly sweet tone to the cadence. Being Christmastime, I put in my favorite yuletide cd, Amy Grant’s Home For Christmas. The slightly breathy vocals of Emmanuel, God With Us, carried the simplicity of the lyrics with a nice touch of warmth. Male vocals do better when hooked up with my Onix SP3 integrated tube amp over the solid state units I use, as it seemed to add some heft and depth to the sonic signature of artists such as James Taylor and Elton John.

Complex symphonies and multi-layered rock may be the nicest surprise. Most monitors go so far, and then hit a wall. Not so with the Aperion 632’s, Pictures at an Exhibition by Moussorgsky with it’s soaring horns backed by the thumping of the tympanis enlivened the room. Much the same effect can be heard from the John Mellencamp’s Scarecrow cd, and virtually any Springsteen offering with the E-Street band. Individual instruments stay distinct into the mid 90 decibels, which is my upper limit of short-term volume toleration. 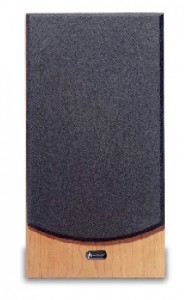 To compare the Aperion 632’s, I brought out the Polk LSi7’s ($919pr), and my reference Totem Mites ($640pr). Against the Totems, the 632’s not surprisingly, had a deeper, fuller base response. The mids on the MITES were slightly crisper, and a bit more detailed. The highs are more neutral and controlled with the Aperion 632’s. In this comparison, the 632’s are a better choice for rock and rollers and full orchestration.

Against the Polk Audio LSi7’s, the $320 difference does make it’s presence felt. The difference is largest in the mid range/mid bass region, where the lower octave-tuned vocals have more weight and depth with the LSi7’s. The highs are much closer, where the 632’s acquit themselves quite well against the Vifa tweeter. One has to wonder what Aperion’s engineer could do with a $1k retail budget? That would be a fun audition! Overall, considering the price difference, the Aperion 632’s do quite nicely for themselves.

From the time I first heard the Aperion Audio 632’s, I knew that Ken Humphries, Aperion’s acoustical engineer, had hit upon something good. These speakers do so many things well that they are a truly easy speaker to listen to, it’s comparable to watching one’s grandmother make her signature recipe, everything is smooth and easy. The 632’s are just a confidant speaker, it’s that simple. I would compare them to the GR Research AV-1’s, in that they are so consistent across the sound spectrum.

What makes the Aperion Audio 632-LR such a steal is that you get free shipping and a 30 day in-home trial. There is no better way to truly evaluate audio than under your own roof and with your equipment. Without a doubt, for under $600 new (no sales tax to deal with in Oregon!), these are the finest monitor speakers I have had the pleasure to audition.