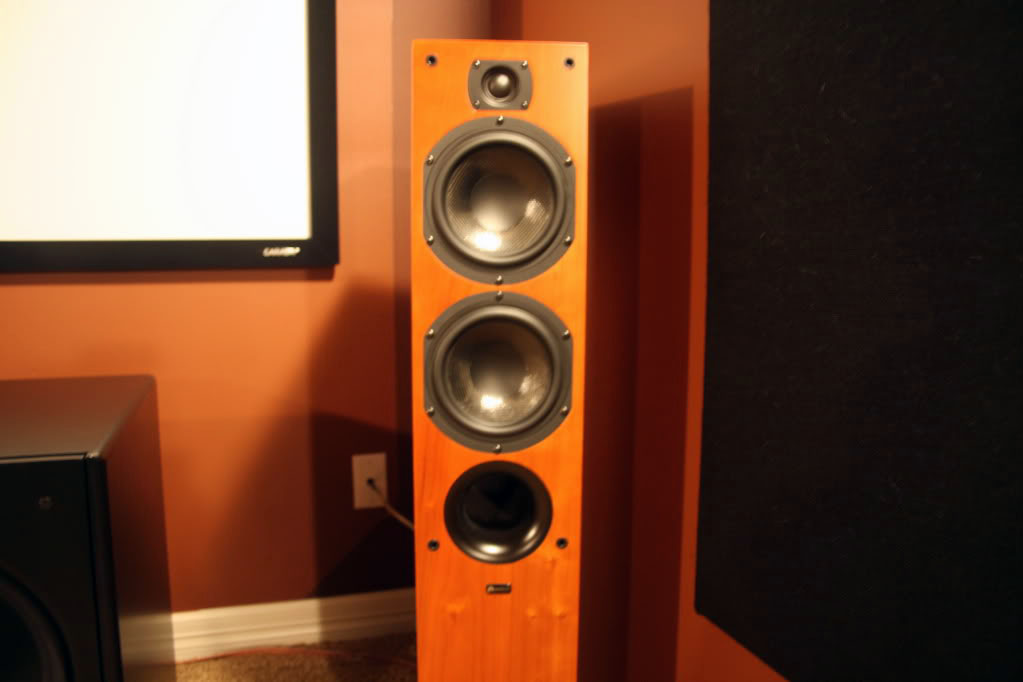 There is a bias in regards to big speakers. We expect them to do everything much better. The listener’s surprise value is lessened with each inch of added cabinet volume. The only way to gain back the surprise factor is by price comparison with another speaker of equal physical stature. When it comes to price + sound quality litmus test the budget audio hobbyists are always looking to add another model to their weapons list in debates with those who endlessly chase sonic nirvana.

For the past three months I’ve had the opportunity to spend time listening to the Aperion Audio Intimus 6T tower. Unlike its smaller brethren, the smooth 5T, and killer 4T mini-tower, the 6T is a bit imposing from the side with its 15.5 inch depth. What is does share is the beautiful medium cherry veneer, or high-gloss piano black finish attached to a simple, yet very effective and sturdy base with screw in brass spikes. Being an Internet-Direct speaker manufacturer the 6T’s came double boxed and virtually encased in Styrofoam. I would be rude not acknowledge the traditional purple felt drawstring bag.

Like all medium to larger Aperion speakers, the 6T’s use a full 1 inch of high density fiber board, instead of the standard ¾ inch. The review pair came in the rich cherry veneer that easily blends in with a variety of wooden furniture and décor. Of course, the high gloss piano black is also available and looks very sharp as well. Both the 1 inch silk dome tweeter and the dual 6.5” inch drivers were redesigned for this model series.

I set up the 6T’s in my great room that measures 16 feet wide by 24 feet deep with a vaulted ceiling that covers about half the room. I spent a total of about two hours over a couple of days dialing in the speakers’ optimal position of 8 feet apart and some 38 inches from the back wall. I found that any sort of toe-in really didn’t affect the sound quality, therefore, the 6T’s were left firing straight-ahead. Once positioned, I attached the spikes. 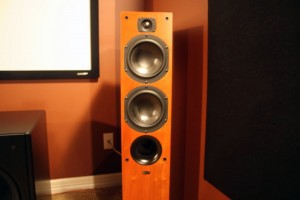 I divided my amplification time between an Adcom GFP-5400 solid-state amp (120wpc) with a vintage GFP-555 preamp, and the Vista Audio i34 integrated tube amp (35wpc) reviewed last month. The source was a Cambridge 540v2 cdp. The 6T’s are listed as needing a minimum of 50 wpc to perform, yet are efficient at 91db.

With the Adcom amplifier, the 6T’s sounded their best playing strong rock and roll. The bass response was powerful, yet nicely controlled. I felt the hard impact of the bass drum in various selections from REM’s disc. Especially impressive was the quickness of the drivers bass slam from Dire Straits “The Man’s Too Strong” from Brother’s In Arms. The impact was easily felt from the farthest reaches in the room. Just as impressive was the lack of hangover. The muddiness that can remain during such sonic moments just didn’t last with the 6T’s. Give credit to Aperion designer Ken Humphreys proper tuning of the front firing bass port. Bottom end resolution, especially with classical music, is a big winner with the 6T’s. Notes and details that normally go missing at this price range show up with plenty of nuance. 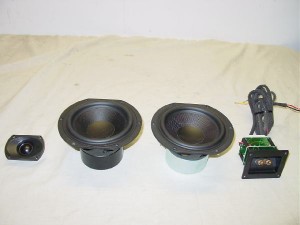 The mid frequencies of the 6T’s are wonderfully organic in texture, with just a hint of warmth. The real treat with these towers is how well they sound from any seat, no matter how off axis from the “sweet spot”. Much like the 6B monitors, I never felt as if I was missing some great moment by sitting off center. This is definitely a finer characteristic of European speakers, something that a part of Aperion’s sonic signature. The lack of blatant boost in the mid frequencies is one reason for the organic sound I mentioned previously. Both male and female vocals have an ease to them, lead vocals and harmonies come out effortlessly. The throaty power of Melissa Etheridge is free of the grumble that so many budget speakers impart on the music. 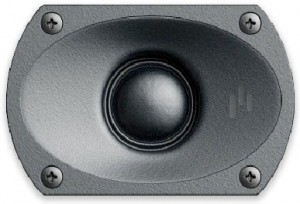 The silk dome tweeter performance belies its looks. There is a definite sparkle in its presentation of cymbals, flutes, and high frequency piano notes. The sound is refreshing rather than brittle. Once again, very much European, it exists but not pushed into the face of the listener. To see if there was any presentation difference to the 6B’s, I went back and played some of the same high frequency tracks. No difference, the 6T’s are true to their smaller sibling. The top end is extended and open, but lacking the noise that pervades the price range.

In switching over to the Vista i34, I gave up some absolute power, but in return gained finesse and warmth. The piano work of Keith Jarrett opened up the soundstage and added depth. The 6T’s may claim 50wpc minimum, but I will testify to the outstanding match the mating to the 35wpc of the Vista Audio’s tubes. The liquidness of the combination was equal to lounging in a hot tub at the perfect temperature. The acoustic guitar work of William Ackerman from his days with the Windham Hill label exuded additional detail that the Adcom couldn’t match with the 6T’s. The decay from each string flowed into the room. The 6T’s throw out a soundstage that fills out a space without forcing the instruments up against the side walls. 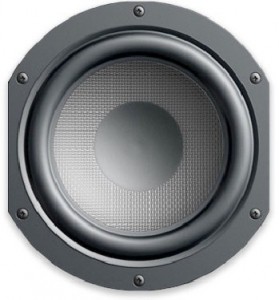 No speaker is perfect and the 6T’s are no exception, but for those looking for a major flaw won’t find one for $1400 a pair. These towers are too well designed. The criticism is set for those looking for the “in your face” sound of some of it’s North American competitors. The 6T’s won’t grab you with punchy acoustic personality. That means that in a quick A/B comparison they won’t stun the listener. Instead, the 6T’s draw the individual into its comfortable world of fatigue-free listening. A perfect example is while I was out of town my girlfriend needed a quite place away from distractions to study. Knowing that she likes to listen to instrumental-only music, I plugged in my iPod with a several hour playlist. From past experience, I knew that she would turn off the stereo after an hour or so. Instead when I arrived home several hours later the music was still playing. Her listening fatigue didn’t exist. That told me an exceptional amount about the quality of the 6T’s.

I had expected the Aperion Audio Intimus 6T’s to be a copy-cat of the bookshelf 6B’s with a bit of added bass boom. Instead, I was treated to a speaker that offers up a tremendous additional helping of resolution in the bass frequencies. The 6T’s sound easy and natural with any type of music. The most difficult of orchestral compositions didn’t strain the presentation. Nor the loudness of heavy rock cause the speakers sonics to turn to distortion. If your looking for a floor standing speaker under $2,000 that can play a wide range of music all day long the Aperion Intimus 6T’s await your audition.