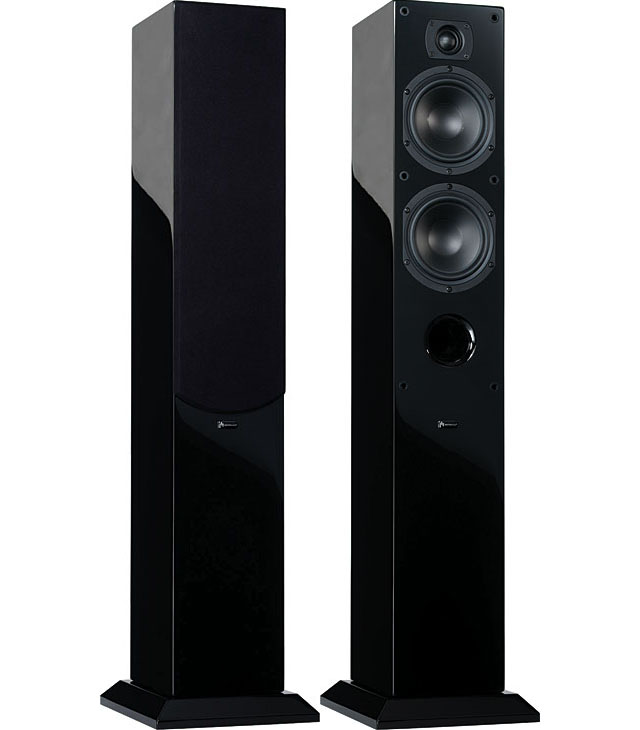 I’ve been looking forward to writing this piece for just under a year now. Last winter, when I was visiting Aperion Audio’s headquarters, John Wanderscheid showed me, in confidence, an early, non-veneered mock up of the 533-T’s. At the time, John bragged that these slim columns would be a big hit. I told him I looked forward to getting an opportunity once they were in production.

A few months later, at the Pacific Northwest Gathering in Portland, Ben and Caleb showed up with one of the first production pairs of the 533-T. In a large (60’x40’) multi-purpose, hard-surfaced room, the 533Ts did a very nice job filling the space with quality sound and imaging. At that point I had to admit that John may very well be right about Aperion’s latest product

The Aperion 533-Ts are a very attractive, slim mini-tower (or column, as some are now calling the design). The width is actually only 6.25”; it’s the very solid (and appreciated) base that makes for the 9.5” width. My review pair came in the satin gloss cherry veneer. The simple lines and small profile allow the 533-T to blend in nicely with most any décor. The cabinet is constructed of 1” medium density fiberboard and finished in either a medium cherry veneer wrap or high gloss piano black paint.

As with all Aperion speakers, the 533-Ts appear to be packed with the belief that gorillas actually do work for the various package mailing companies. Styrofoam packing depth is quite ample[I WOULD SPECIFY INCHES]. On top of that and the double boxing, is their traditional purple drawstring bag to protect the veneer. In addition, one will find brass spikes and footers (for those with wooden floors).

Like its big brother 633-T’s, the 533-T is a front-ported tower. Above that [‘ABOVE THAT?’] are two 5 ¼ mineral filled polyprophylene drivers and a 1” silk dome tweeter. Aperion states that the design is a two-and-a-half way, a layout that is gaining in popularity. In the case of the 533-T, it means that the second driver focuses on lower frequencies only. Aperion recommends that the grills remain on for listening, an issue with which I had no problem complying. The backside is clean, with a single set of 5-way binding posts at the base of the speaker. I only wish all manufacturers followed this simple touch. I know my wife appreciated the fact that this placement assists in limiting the visual distraction of speaker wire.

My review sample of 533-Ts had just been returned from another reviewer, so I initially skipped the break-in period. However, upon first listening, it sounded as if the tweeters had missed the break-in time. I placed the speakers with the secondary rig in my family room and let them play overnight for a full week. Upon their return to main system, the highs had smoothed but the sound was still brighter than I am used to with Aperion.

I checked both my memory and notes on their fine 632 monitors. Nowhere did I write anything about brightness. I then emailed John Wanderscheid, VP of sales at Aperion. His reply explained much: the 533-T’s were designed for the “everyman”, while the 632s are targeted to a more audio-centric crowd

Wanting to be accurate, I stopped by Aperion’s headquarters and experienced both speakers models first-hand. The differences are quite evident: the 632 monitors have more of a classic European sound, while the 533-Ts are truly North American in their reproduction, including a brighter top end.

After a second round of listening, it dawned on me where I had heard such a similar sound profile: the Polk Audio RTi8 towers. Both speakers enjoy being farther apart than one might expect to create their soundstage. They also share a slight brightness, and light but forward thump.

Both Aperion and Polk towers favor faster tempo light jazz, along the lines of Spyro Gyra. Their album Watching the Sun fairly exudes tracks featuring uptempo, layered instruments. The 533-Ts thrive on filling the room with this type of music.

Having recently revived my interest in vinyl, I moved the 533-T columns into my family room and hooked them up to my vintage Harman Kardon 680i receiver. True to its nature, the slightly warm Harman Kardon sound brought the upper frequencies down just a bit. Seals & Croft’s Greatest Hits kept the edginess of the vocals in “Summer Breeze” rather than smoothing it out. The Aperion 533-Ts replicated that edginess without resorting to shrillness, something that a friend’s well-known speakers failed to handle.

It’s important to mention that the 533-Ts are very easy on the setup end. As long as they have at least two feet from a back wall, and three feet from the sides, they can throw out a quality soundstage. This “place them and go” ability is a part of why John Wanderscheid called them an “everyman” speaker. In my tinkerings with various placements in the family room, only miniscule sonic differences appeared. The more time I spent listening in the family room, the truer John’s words became. With the 89db efficiency, one doesn’t need powerful equipment to make the 533-Ts sing.

Taking to heart, I finished up my time with these little columns hooked up as fronts in my home theater rig. True to their style, placement was quick and rewarding. The movie “Reign Over Me” has a terrific soundtrack with a wonderful surround recording. The 533-Ts played with both clarity and detail, especially in the street scenes, where sound can easily get congested. [Adding in the Aperion S8 subwoofer brought out the emotional tangle of sound that encompassed Adam Sandler’s engrossingly subtle performance.

As we all know, speakers under $2000 have limitations-there is no way around it. The 533-Ts, like all value-priced speakers, have tradeoffs. The high frequencies may be too bright for those with an abundance of hard surfaces. Carpeting and/or sonic room treatments may be needed if you have wooden floors. Since these are quite efficient speakers, you can hook them up to a bargain receiver, but don’t be surprised if you actually use the tone controls a bit to shape the sound.

Secondly, big, powerful bass is not a forte of the 533-Ts. If bass is part of your listening requirements, you’ll definitely want a subwoofer to assist in creating the sonic thump and rumble. Or, move up to the Aperion 533-PT with the built-in powered subwoofer that I reviewed in June.

Aperion’s nifty online “University” can help in making that decision.

In a time when speaker designs require both impeccable placement and system synergy, it’s refreshing to come across a pair of cabinets that just don’t require much effort to sound good. The Aperion Audio 533-Ts, with their simple, gracious looks, and easy-to-place setup capability, make them a fine choice for those looking for a no-hassle speaker. When you combine the 533-T’s features with Aperion’s first-class service, including the very helpful “Aperion University” on its website, plus a 30-day trial and free shipping both ways, you see it doesn’t take a rocket scientist to figure out that the 533-Ts are an obvious choice for an in-home audition.