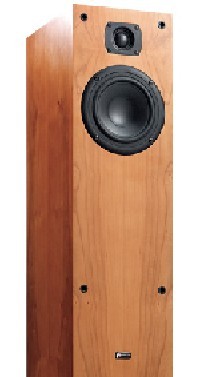 No matter where an audio affectionado lives, there is always a sense of pride when a local manufacturer succeeds. In Portland, Oregon one such company is Aperion Audio. Started in 1998 from the simple desire of replacing a dead boom box, Winthrop Jeanfreu jumped into the 21st century direct-to-customer model using the Internet as its delivery vehicle instead of middlemen. This allows Aperion to spend more on high quality components and still meet price/ value points in the market. This model is not without hazard, as without a dealer network, Aperion must stand behind its product, which it does with a 30 day in-home return policy including return shipping. A second trick of the direct model is getting the word out without daily foot traffic of a brick and mortar store. That involves shocking reviewers with quality, and designing a very friendly web site that includes a forum. Needless to say, Aperion Audio has done well on both accounts.

I became aware of Aperion speakers last summer through an acquaintance who was more than happy to show off his home theater system to me. Almost instantly I knew I was listening to quality. I filed away the Aperion name as to one I would want to check out down the road. 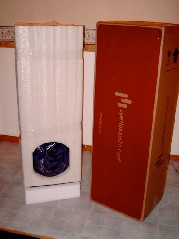 During the Christmas season last December I stopped in at Aperion Audio’s headquarters in suburban Portland. By that time I was in the beginning stages of replacing my Celestion SL6si speakers. Being direct to customers, Aperion is very welcoming to walk-ins. I was ushering into a comfortable audio-visual home theater room. Along the far wall were all the Aperion models connected to appropriate (not stratospheric) priced equipment including a fine and affordable Parasound Halo amplifier. A few wall treatments assisted the sound room. The key impression for me was that Winthrop and crew wants the customer to get a true sense of what they will hear in their own home. 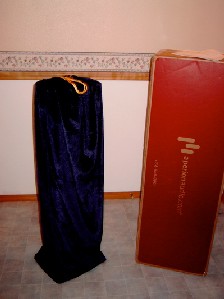 In late March I made an inquiry to VP of Marketing, John Wanderscheid about reviewing a set of towers. A few days later I was given a tour of their office warehouse (the speakers themselves are manufactured in China). At the end of my visit I left (after some careful loading into my Honda Accord) with a pair of the Intimus 533-PT’s, and a feeling that Aperion practiced what it preached on its web site about customer service. 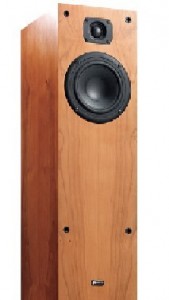 Once home, I unloaded the speaker boxes and placed them in the living room. I then went to check my email, already there were two emails from Aperion Audio. Even though they were computer generated, the message was simple enough, Aperion cares. (Since then, I have received three more) After dinner, and a few, veiled threats from my wife about hernias, I went about unboxing the 533-PT’s. The first thing one notices, is that there are no soft spots in the shipping boxes, just a solid, tight fit. Upon sliding the cardboard boxes away, one is greeted by a virtually completely encased styrofoam shell. The only opening was for the grill covering the subwoofer. After pulling away the two halves of foam covered in clear plastic is what appears to be a giant bottle of Crown Royal, wrapped in its classic purple felt “sock”. The fabric isn’t just for decorative stimulation, it serves the very real purpose of giving additional protection of the beautiful cherry veneer finish (glossy piano black is also available). 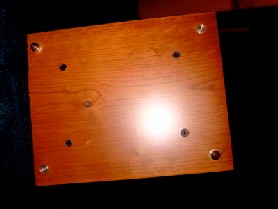 Once unwrapped, the next step was to attach the brass-spiked feet. Once again Aperion goes the extra mile. The brass feet are about the circumference of a quarter, with a nice textured gripping area. Also, female brass thread nuts are imbedded in the base, making attachment perfect. The spikes are what I consider the perfect length as they disappear into the carpet leaving a look of the wooden base resting lightly on the carpet. A final touch to this thoughtfulness is the inclusion of brass cup bases to hold the spike points on hard floor surfaces.

The cabinet of the Intimus 533-PT is constructed of one full inch of medium density fiberboard with a real cherry veneer in a natural finish. The look is understated and clean. A nice touch is the molding base rather than outboard feet that are the current rage by the big manufacturers. On the back side from top to bottom is a round port, a single set of 5-way binding posts, the sub-woofer amplifier, and finally at the bottom a second oval port for the sub. The 8 inch sub woofer is mounted on the side.

The Intimus 533-PT’s placement in my living room worked out to be 27 inches from the back wall, and 30 inches from the side wall. The towers measured out to be 109 inches apart and slightly towed-in. My listening position was approximately nine feet away. As with all my reviews, each listening session involved a demo cd of various artists, plus the shuffled contents of my iPod (all recorded at AIFF file size).

The Intimus 533-PT’s were comfortably listenable right out of the box. The musicality was expectably thin, but not as much I expected. The silk dome tweeter was quite pleasant with no indication of harshness. Had these been monitors I would have left them to break-in in my classroom over a couple of weekends at a strong, moderate sound level. However, with towers this just wasn’t possible. Instead the process took much longer, especially since my wife works from home. At about 40 hours the drivers warmed considerably. Acoustic guitars developed the naturalness that I expected. Total break-in hours before the actual review began was 83 hours, additional playtime between serious listening didn’t seem to change the sound characteristics any.

My initial impression of the 533-PT’s was that they were somewhat similar to the GR Research AV-1’s. Smooth across the frequency spectrum, though a touch brighter. This consistency, I believe comes from the HD-X3 crossover technology. In Aperion’s own words: HD-X3™ Impedance Leveling Crossover Technology Patent pending HD-X3™ crossover technology levels the impedance load across the entire frequency range creating a remarkably flat frequency response and eliminates the detrimental effects of resistance introduced by long runs of speaker wire. This technology I believe will benefit those who own home theater receivers the most, as the amplifier sections will not be nearly as robust as separates. Thus allowing the receiver to perform at optimum levels even with more difficult audio passages. 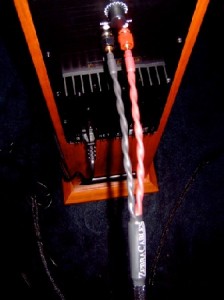 During my listening tests I found the Intimus 533-PT’s to be at their best with quality vocalists. James Taylor’s September Grass came out as an intimate session for a few friends on a beach. Other numbers by this iconic balladeer were equally enchanting. The delicious clean vocals of Phoebe Snow washed over me like a summer breeze by a mountain creek. The subtle hint of country twang in Dan Fogelberg’s raspy vocals was a wonderful reminder of his Midwestern beginnings. Weaker singers did not benefit. Joe Jackson’s slightly angered voice comes out more reedy and irritated in Cha Cha Loco. Rockers such as John Mellencamp, suffered from a thinness of harmonics. However, Roger Daltry of The Who, long underrated in his vocal command controlled the room in Won’t Get Fooled Again. If the singer has the chops, the 533-PT’s bragged for them, otherwise be prepared. When it comes to vocals, the 533-PT’s are Simon Cowell, brutally honest.

The area where the Intimus 533-PT’s excel is with acoustic guitar and jazzrock fusion. The simple sound of a twelve-string guitar enveloped my living room. The surprisingly smooth finger work of George Winston (yes, he does play guitar) in Sassy, pulled me forward in my chair. The same holds true for the guitar in Phoebe Snow’s Something Real. It’s a wonderful combination of mellow and sweetness. During a second listening session it occurred to me what was so wonderful, the powered built-in subwoofer was allowing me to hear sounds that I haven’t experienced in the many years since I parted ways with the legendary Polk Monitor 10B’s in the late 1980’s.

As I have mentioned many times, I’m no fan of heavy bass. However, the Aperion’s have awakened me to possibility that a properly controlled/distributed deep end has some wonderful advantages that I need to look into. Certain instruments were richer and fuller than I remember. All of this “expanded” sound was very evident while listening to the full Steely Dan album Aja. Specifically, the xylophone’s resonance was a wonderful treat in the title track. Everything I was experiencing was accomplished with the subwoofer gain control at only 50%.

I decided that since the Intimus 533-PT’s would find their way into many home theater setups, I should give it a try myself. I moved the towers into the family room and put in one of my all-time favorite movies, The Right Stuff. The subwoofers deliciously kicked in the full rumble of the Mercury and Atlas rockets. These towers are definitely worthy of consideration in a home theater setup.

What Aperion has done as a company in a few short years is impressive. They have created a line of speakers with a true quality/value combination. The Intimus 533-PT’s offer so much more than many of their competitors. The powered, side-firing subwoofer is an absolute wonderful match for an already fine sounding small two-way tower. With attention to such little details as the brass spikes and beautiful cherry veneer, it is no wonder that Aperion has garnered such consistent praise. The Intimus 533-PT’s are an exceptional value and with its 30-day no-hassle try out and ten year warranty, anyone looking into this price range should place this model at the front of the line for auditioning.