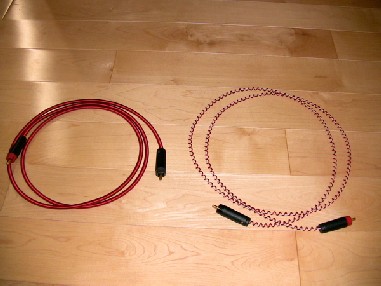 For regular readers of A$$A you will remember my review of Anti-Cable speaker wire, jumpers and interconnects back in the July issue. I was quite taken by all three and they are now happily a part of my main review system. I thought they were fully broken-in after over 120 hours of use but found that they continued to improve. I cannot imagine them getting much better then they are now as the sound coming from them is truly first class. As Paul Speltz of Anti-Cables mentioned in his manufacturers response to the original review “it is not so much that they are great cables for the money. My customers tell me they are great cables despite the money.” For only $345 you are able to purchase a 10’ pair of stereo speaker cables with spade terminations, two sets of interconnects and a pair of jumpers with banana termination. If you missed the original review take the time now, go back to the July issue and read up on it before you continue. In it you will find a lot more details about Anti-Cable, the company and their other products, then I will go into today. This review is a continuation of more high quality products from the same company, which I must say, is again value priced.

One of the last things I had mentioned in the original review was that Anti-Cable had a Digital Interconnect, which at the time was not yet in my possession. If I had them for the original review I would have of course discussed them in that July issue. Paul mentioned to me that he was making Digital interconnects for his customers yet he was not advertise them on his website. If you wanted them you needed to ask. Well luckily for me he offered to send me both of the digital cables that he is quietly offering to the public. Each is a 1.5-meter length cable, one single and the other triple shielded. The price of either is only $150. The single shielded cable is like Paul’s regular interconnects in that they can be bent to go over or around things and they will stay put. The triple shielded version is more traditional looking in that they drape like a conventional cable. Even though they hang similar their looks though are different then most as you can see from the pictures. There are indeed sonic differences between them but I can tell you that both are of great value. I would say that no matter which you choose I could not image you not being fully satisfied with your purchase. 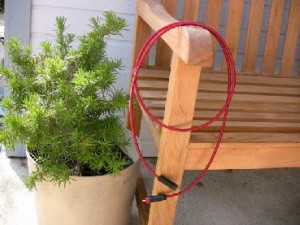 His original intention was to seek my opinion of the two and not to generate a review. After living with them in my main system for three weeks I asked Paul if he would allow me to tell the public about them. I felt they both offered slightly different sonics that were enjoyable to listen to and that more people should be aware of them. These are two great digital interconnects as you shall shortly see.

To start out with lets take a look at the triple shielded cable.

Paul has been making this triple shielded digital Interconnect for about a year now. I must say that I was quite taken by the appearance of this one as it hung from my hand like fine jewelry. It’s weight; feel and looks certainly were a plus. While of course physical beauty alone does not make it worth the price of admission, it certainly does help. Playing song after song no matter which CD I used one thing was evidently clear to me. This Digital cable had a bass response that was certainly a pleasure to listen to. It did not overemphasis anything just allowed the bass to play through for the enjoyment of all. I felt the mid-range was just slightly laid back in comparison to the single shielded IC, yet it still produced magic with vocals, either female or male. Santana’s Supernatural CD has lots of songs with bass galore and this IC took full advantage of reproducing it all. Whenever I want to feel the floor move I put on the track from the song “Maria Maria”, from the same CD. Here the triple shielded IC easily made me sit up and take notice. Moving onto Eric Clapton’s Unplugged album the emphasis in the recording is not on the lower regions but more in the mid-range. The added bass drive from the triple shielded cable actually helped on this CD, giving it that little extra feel of power. Clearly this was a digital interconnect that got your foot a tapping.

As for Paul’s other digital cable, the single shielded version, it is a newer concept at Anti-Cable. This Digital Interconnect was physically lighter in weight, in comparison to the other, but had a beauty all its own. As I had mentioned in my July Review (which I hope you have already read by now) Paul’s interconnects have a high-tech look to them that I was immediately drawn to. This cable like the previously mentioned stereo interconnects is a single straight wire with another that spirals around it. Of course it is shielded. The advantage to this being that it is able to bend yet still retain its shape until you change your mind and bend it back a different way. When I listened to the same tracks on the single shielded IC I was treated to a different type of sound. Here the strengths, as I have mentioned, seemed to be in the mid-range section of the recording rather than with the bass. It still produced quality bass but not as deep as the triple shield IC. But what it did do with vocals was allow you to explore deeper into the human voice and to hear the singer with all their ever so slight fluctuations in tone and pitch. The character of the voice was produced in greater detail, which worked better for me on certain songs. 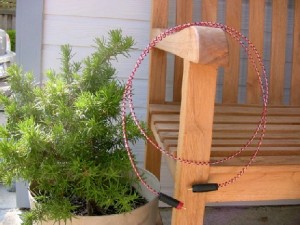 I had not listened to Bobby McFerrin singing “Don’t Worry Be Happy” from his Simple Pleasures CD in a long time. I decided to revisit this great performer using the two digital cables. Each of these two cables revealed a slightly different perspective of the same song but for me the single shield IC won. I liked the slightly better open highs; the midrange qualities and the clear yet firm bass response. It is true that the triple shield seemed to do a little more in bringing a solid feel to the lower notes but, with this song at least, I felt the single version did a little better job overall.

The differences between the two interconnects was not overly apparent the first time I listened. I had to sit down to do some quiet and careful evaluation before I was able to readily tell the differences from the single to the triple shielded digital interconnect. Yes, both are that good but after a while I discovered that each cable had its own sonic strengths. No matter which one I was listening to both was a joy to have in my system. I believe in synergy and felt that having, interconnects, digital IC’s, speaker jumper cables and speaker cables all from the same manufacturer was a definite plus for reproducing quality sound. I therefore recommend you consider buying all of them together as they are also so well priced and easily affordable.

Soundstaging with both digital cables was of course excellent, as I have come to expect from Anti-Cable products. In the original review I had mentioned that Anti-Cable products helped expand the soundstage of my system to a comfortable level for the enjoyment of all and was definitely one strong point of their products. The pricing being the same with these two cables choosing between them was a difficult choice to make. One that I believe should be left up to you based on your system and the type of music you enjoy playing. I constantly found myself going back and forth between the two, switching cables as I listened to different CD’s. Sometimes I really enjoyed that extra drive with the triple shield and other times I just loved listening to vocals with the single shield IC. Both these Digital cables replaced a cable costing over $230 and they were the winners hands down. Like with the other Anti-Cable products, from the July review, these IC’s made my system feel as if I was closer to the music. If I had closed my eyes I would have thought that someone had removed the speaker grill from my Legacy Focus 20/20 speakers. These digital IC’s allowed the music to open up in my room with everything sounding clearer and more in focus. At these prices maybe you should buy both, either way you will be purchasing cables capable of producing quality music. Call or email Paul Speltz and talk it over with him. He is easy to talk to and an extremely knowledgeable designer.

Making a product with the right knowledge, equipment and no limit to the final price in mind is a much easier task. But to produce products that are first rate in terms of performance and still keep it priced where most people can readily afford it, is the challenge. At $150 for a 1.5 meter length, where many manufacturers offer only 1 meter, is also a distinct plus for Anti-Cable. I like having that extra ½ meter, as space is always a factor in setting up a system.

To sum it up I guess it all comes down to this. Do you like your apple pie served nice and warm or do you like it with a scoop of cool vanilla ice cream on top. Either way you are in for a treat, one that you should definitely order up, and maybe go back for seconds.

As for my room, I have so far keep it quite simple as far as any acoustic modifications are concerned. My wife has allowed me to take over our living room being that the only guests we know are our relatives. Their visits usually center around the family room, dinning area, backyard when we barbeque or home entertainment room for movies. She is not so keen however on any acoustic looking invaders entering our house at this time. The listening room is 18’ 8” long by 13’ wide. The room’s cathedral ceiling starts at 8’ high then slopes upward to 13’ at its peak in the middle. Flooring is a soft hardwood covering with an oriental rug placed dead center in between (but not under) the listener and the audio system. There are no doors that open or shut into other rooms also there are two large openings one facing the speakers and the other to its side and slightly in front of the right speaker. As for my audio equipment it is tucked nicely inside of a Cherry Synergy Twin S30 Salamander audio rack.