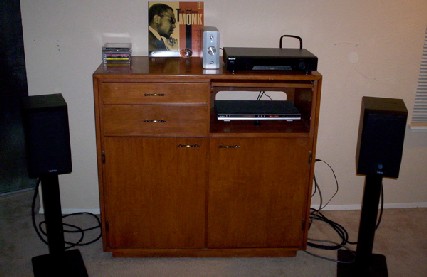 An affordable audio system is a term that to some people in the mainstream audio press means a system that is obtainable for a few thousand dollars. To the average person with an average income, children to raise and bills to pay, thousands of dollars to spend on a hobby is a considerable sum. Hence the mission of this publication is to explore musically affordable products that every man and woman can afford. I have been extremely blessed over the years to be able to obtain a very nice reference system that could be considered by some as high end but, yes it cost thousands of dollars to assemble. However my audiophile roots started with very humble beginnings, when I purchased my first mid-fi quality system in High School. From that moment on I was always tweaking it to try and improve upon its musicality.

Today the budding audiophile has more equipment choices available than ever before and at extremely reasonable prices. With that in mind I assembled a killer sounding system for less than $1000.00. If you are as lucky as I was you can find a few of these items used and save a few dollars more!

The heart of any system is the amplifier, the Sonic Impact Super T Amp is a great little amp designed in the USA and built in China that can be purchased for $159.00. The secret to this little amp is the Class D technology that utilizes a TriPath TA2024 output module which the manufacturer states produces 15 Watts into 4 Ohms or 10 Watts into 8 Ohms. Plenty of juice to run some efficient speakers and remarkably it has the same output as the KLH receiver that I had in high school. The controls are simple, an on/off push button and volume knob in front along with a blue LED to indicate the power status. The rear apron has a right and left RCA input and a right and left set of 5 way binding posts for speaker connections. Additionally there is a power input jack for connecting the separate 12VDC power supply to the amp. I purchased my Sonic Impact Super T from Kent Layden one of the owners of Two Bald Guys Audio while attending the Greater Portland Audio Gathering, thanks for the great amp Kent!

For a great source component, look no further than the subject of my review last month the $149.00 Oppo DV970HD universal disc player. These two pieces work very well together and sound exceptional for the money.

I happen to also own a set of Infinity Primus 150 bookshelf speakers, they are a great small, relatively efficient speaker @ 88db 1 watt 1 meter that work well in this application. The Primus 150 is a compact two way ported design consisting of a metal matrix alloy 5 ¼” woofer and a metal matrix alloy ¾” tweeter. The crossover point is at 3300 HZ and incorporates a 24db per octive slope design. It is rated 58HZ – 20KHZ + or – 3db on axis. The Primus 150 speakers have recently been replaced by the Infinity Primus P152s which I have been told are the same speaker with upgraded cosmetics. The specifications are identical and for $200.00 list and frequently available at a discounted price below $150.00 the P152 is a great audio bargain. 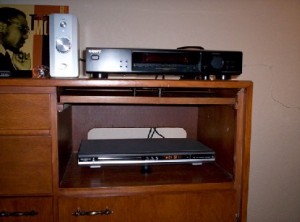 Even though this system has a modest price I was very diligent to set it up using the same care and consideration that I would with top of the line components. I secured the Primus 150 speakers on top of 24” lead shot and sand filled Plateau speaker stands using DAP “funtak”. I placed the speakers in the same locations I use for my reference Paradigm S2 speakers, 53” out from the rear wall and 12” out from the side walls angled in on axis to the listening position. I also made sure to utilize a good quality interconnect between the Sonic Impact and the Oppo, in this case a pair of Eichmann Express Six with silver bullet RCA plugs. I tried a couple of different Speaker cables, the DH Labs Silver Sonic T-14s and the Zebra Cables ZC-SP12SDs both sounded good, but I settled on the Zebra Cables due to their superior bass response and midrange resolution. If you haven’t given Zebra Cables a try you should, they are great sounding cables. All critical listening took place in my well damped 18’L X 13’W X 7’ 6”’H basement listening room where I keep my reference system.

I would have never thought that you could have such good sound for so little money. I played a couple of my favorite CDs right off the bat to get an idea what I would be missing, not a heck of a lot as it turns out. I dropped Miles Davis’ Kind of Blue into the Oppo’s drawer and gave it a spin. Track one, “So what” had a good sense of space and air around the instruments, the bass was full and musical. Mile’s trumpet sounded smooth, distinguished and soulful. Coltrane’s tenor and Adderley’s alto sax were clearly distinguishable from one another and sounded like they should. The music never sounded bright or brittle as is often the case with inexpensive systems.

This is not a powerful system so of course the dynamics were not going to match that of my reference system, however just for fun I
played a couple of cuts from Tom Petty and the Heartbreakers Anthology CD, track one which is “Beakdown” and “American Girl”. Even when I cranked the volume a bit the music had the proper pace and rhythm, the bass, guitar and vocals were all distinctive and clear. Petty’s unique vocal inflections were bright and concise, but never strident. I was surprised that the dynamics of the performance were conveyed so well. Only when I pushed the amp hard did the sound become compressed, harsh and gritty. Though this is not a “rock and roll” system when kept at moderate volume levels the essence of the music always came through.

I have always been smitten with Canadian jazz pianist and singer Diana Krall, her albums are always well produced and diligently showcase Diana’s capacious talents. On Kralls’ CD

Lovescenes, track two “Peel me grape” the air around the piano and Diana’s voice was clearly disseminated. Krall’s husky, sultry voice was warm and inviting. You almost felt as if you were sitting just across the piano from her as she sang. The pace and tempo of the acoustic bass and guitar solidly augmented the performance, each were distinct, warm and detailed enhancing the laid back demeanor of the recording. Overall the performance was captivating and realistic.

I believe that most good audio systems are built over time, piece by piece as finances and circumstances allow. This system is a starting point for those individuals that want an audio system that is musical yet affordable. As long as volume levels are kept reasonable this system will surprise you! Additionally, since the Oppo 970HD is a good entry level source component, as finances allow you could upgrade from the Sonic Impact Super T amp to a more powerful integrated. 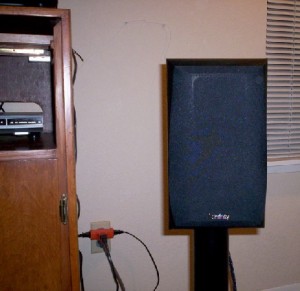 In the meantime I wouldn’t hesitate to try some other efficient speakers with the Sonic Impact Super T Amp and the Oppo DV 970HD. I borrowed my wife’s Paradigm Atoms from her living room system and they sounded great. By contrast My ProAc Tablettes were not nearly efficient enough and didn’t sound good in this application. Given this experience I would recommend that the minimum speaker efficiency required for this system be no less than 88db @ 1 Watt 1 meter. As with any system set-up is critical as are the ancillary items such as cables and speaker stands. Experimentation with speaker placement especially can really yield some excellent sonic results. Even with quality cables and speaker stands this an affordable system that can be had for less than $1000.00, enjoy!

from aﬀordableaudio,  By Todd Arthur

1 thought on “An Affordable System for Music Lovers”