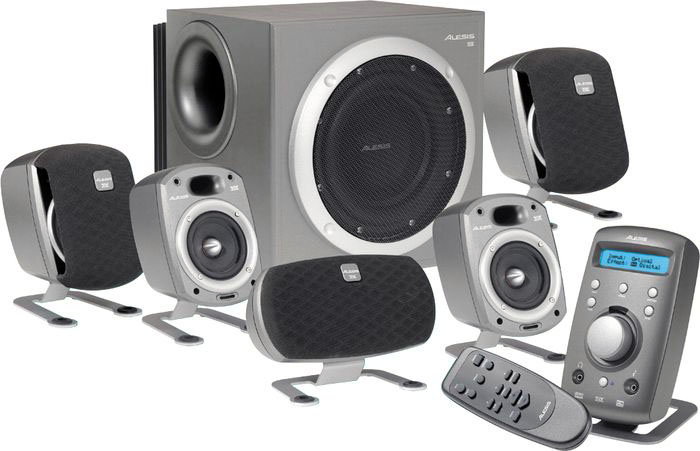 The Alesis ProActive 5.1 surround system offers more than just a set of monitors. The compact, THX-approved system also adds a variety of inputs and format options that can offer a complete solution for certain monitoring applications.

The entire system weighs in around 50 lbs., with most of that weight concentrated in the subwoofer package.

The sub housing contains the power amplifiers for the five satellite speakers (better than 60 W a channel) and for the 10-inch woofer (188 W). It also contains the real brains of the unit  the processing electronics that decode Dolby Digital, Dolby Pro Logic II, and DTS signals. Performing these tasks and handling bass management and other chores would typically require either the use of a stack of pro processors or the incorporation of a consumer receiver. With the ProActive 5.1, all the processing can be accomplished with a single unit.

Input to the system is routed from a control head that attaches to the sub unit via a multi-pin connection. The control head, which also houses a multi-function LCD display, control buttons, and a large soft knob, is equipped with coaxial and optical inputs for digital sources, three mini TRS jacks (with RCA breakouts provided) for direct input of HiFi level discrete 5.1 analog inputs and a front-panel mini TRS input for 2-channel or matrix-encoded analog signals.

The control head (about the size of a DVD case and about three times as thick) has to be located fairly close to the sub unit  the attached cable allowing a run of about 5 feet. The control head also needs to be near any source equipment as it provides the input access to the system. A built-in L foot lets the control unit sit easily atop a stack of playback equipment. Where the listener is positioned away from reach of the control unit, a standard wireless remote control affords the user control of various functions, including source selection and volume control. Speaker wire is also included with the system.

The front ported satellite speakers feature a 2 3/4-inch cone speaker with a center chrome bullet tweeter element. The small housings, save for the horizontally configured center speaker, are vertically oriented with an L-shaped foot for mounting. At first glance, the satellite speakers appear no more substantial than an average mid-sized unit that might be packaged with a computer system. The performance is surprisingly superior to units of similar size. The satellites are crisp and clean, and readily handle the drive power to substantial volume. Removing the grille adds a touch of brightness to the sonics.

Individual level control is available via the control head, and the sub and satellites are well matched with one caveat  I found it necessary to back off the sub level substantially from the default setting. In a mid-field setup, using the system in an entertainment system configuration, I backed the LF level down to just a step above full off. In a desktop configuration, as would be used if the system were employed on a computer center workstation, I still felt the need to back the sub level off the default setting, but to a less aggressive extent as the satellites were closer to my ears. 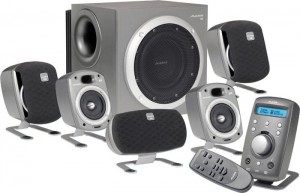 With the sub balanced to taste, the ProActive 5.1 performs capably  especially considering the price and the amount of processing on board. I would have liked the ability to independently adjust the subwoofer level (bass managed components from the main channels) and the LFE channel, and the range of bass control could be rescaled toward flat response for professional listening. The physical placement of the sub could be a little limited by the length of the control head wiring, but that didnt cause problems in the two configurations I tested. The integral feet on the satellites point them upward  perfect for a desktop or workstation usage, but the non-adjustable angle required use of a shim on my speaker stands.

The final analysis: for certain applications, the ProActive 5.1 system is an excellent value. The monitor system is well suited for providing a consumer listening experience as a check on a mix in progress and for comparing released product  even of differing release formats as it natively handles all the major encoding protocols plus discrete inputs. The system provides a viable and compact solution for workstations for digital editing or authoring chores. And it absolutely rocks for your client lounge, where multiple formats will be played back, alongside use for watching movies, with digital cable TV, and to accommodate the inevitable Playstation 2, X-Box, or Game Cube.