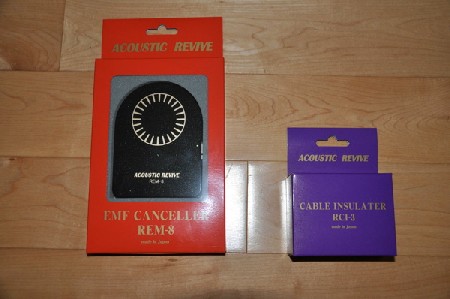 If you are looking to squeeze the most out of your audio products, you need look no further than the audio accessories from Acoustic Revive. This is after all their specialty. No they do not make amplifiers, speakers, DAC’s, Cd players, transports, tuners or even preamplifiers. What they do however, is find ways to get the most out of the above mentioned equipment without the need for you to purchase new gear. Do you have an amplifier that you are attached to and would rather keep than to replace with something else, yet you feel the need to upgrade for a different sound? Fear not for Acoustic Revive has many a product available for you to do just that. Today I will tell you of my adventures with their REM-8 EMF Canceler and RCI-3 Cable Insulator. I say adventure because I feel that experimenting with these products is just that, an adventure, a journey of great joy that one would like to embark on. 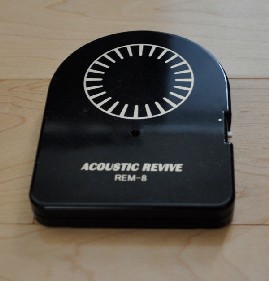 Starting out with the REM-8 EMF Canceler I was pleased to see how easy it was to use. Put in the supplied battery, flip the switch to turn it on, and then experiment with placement. The idea is to neutralize electromagnetic waves that originate from our audio systems in places such as power supply transformers. It is also said to be effective with the output transformers from vacuum tube amplifiers. Luckily for me I had a Blue Circle SB90T hybrid amplifier on loan from Gilbert Yeung. There are further claims that it will have positive effects on video performance due to the fact that its effects stabilize the video circuit. While we are not a video publication here at “A$$A”, I do have a Sony Playstation which I use as a Blu-ray player and can test the effects of the REM-8 with it. To use it simply place the REM-8 under the components power or output transformer, without making contact with the audio equipment, and you are ready to go. On projectors or Plasma TVs Acoustic Revive suggests that you may put it near their power transformers or,if you choose, stick it on using Velcro or tape. Back to my audio system I experimented with different placements for the REM-8’s and for me I found that one face down on top of my preamplifier with the other face up under my amplifier, worked best for my system.

From the Cd (The Ultimate Luther Vandross) with the song “Here and Now” the REM-8 helped to create a wide soundstage, certainly greater than when no REM-8’s were present. Placing two under one piece of equipment did not yield the same result, as using one under the amplifier face up and one on top of my preamplifier face down, in my system. I preferred this particular effect but I suggest you experiment with what works for you and how you want to tailor the sound to your particular liking. I liked the wide soundstage, strong bass presence and vocal textures of Luther Vandross and Beyonce in the song “The Closer I Get To You” from the same Cd (The Ultimate Luther Vandross).

The impact the two REM-8’s had on the music was indeed wonderful and I would not hesitate to leave them right there for all my listening sessions.

Time now to try the REM-8 with the Sony Playstation and I will do so by testing it with two Blu-ray movies. One film is a cartoon called “Wall E” (Disney-Pixar) the other “The Dark Knight” (Warner Brothers). All the viewing was done on a Sharp Aquos LC-GP321U 32” LCD HDTV. With “Wall E” I noticed a sharper picture with richer colors. Reds and blue were more saturated and less washed out which gave the picture a definite positive effect in my book. On “The Dark Night” I would again notice more details in the images, even during dark scenes, I was able to pick up more details in the faces and clothing. There were no drastic changes in the picture but they were differences I would rather live with than without and I would think that on a larger TV it would be even more noticeable. The fact that if you buy the REM-8 for your audio system and you can just pick it up so easily to move to your home theater setup makes it even more of a bargain product since it serves two purposes for only one price.

Getting back now to the world of audio entertainment, the RCI-3 is another interesting audio accessory from Acoustic Revive. It is not made from a single material like most cable insulators. The thought behind the RCI-3 is not just to lift the cables off the floor but to also eliminate any resonance coming from the insulator itself. Doing this would thereby prevent any coloration from entering the sound system through the device seeking to isolate the cables. The RCI-3 is made of wood, both maple and ebony. The inside part of this isolator is a blend of three natural ores and where the cable rests on it is a sheet of fo.Q (pronounced pho-cue, like pho in photo and Q like the letter sounds) damping material. Their website claims that even when cables are short enough as to not touch the floor or when used with some other isolators the RCI-3 can further improve upon the sound. Their feeling is that the resonance control structure and electromagnetic wave absorbing characteristics of the RCI-3 are powerful enough to affect a change even under these circumstances. While not inexpensive at $150 per isolator they can be used more efficiently by placing one on the power cable where there is a lot of different equipment plugged in, into in order to affect change with more than one component while using only one RCI-3 insulator. The claim is that just one of these will effect a positive change in your system when properly placed and that two or three should do the trick with most systems. Acoustic Revive sent me ten to play with for this review and so I was able to place them in various places and experiment with their effects to a much larger degree than you might need in your particular system. 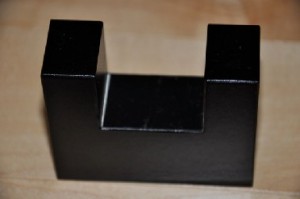 To start out with I placed one RCI-3 under the power cable that was connected to the power supply box which had my amplifier plugged into it. I then proceeded to listen to Billy Joel’s (The Stranger) “Movin’ Out” song on vinyl with my Oracle Delphi turntable. Here I noticed there was a little more “punch” to the song when played with the RCI-3 inserted. On the song “The Stranger” the whistling in the beginning of the song was slightly clearer but nothing dramatic yet. Next I placed another RCI-3 under the phono cable coming out from the turntable and one under each speaker cable. Now I had a total of four in my system and sat back to listen. No question for me, here I could hear a distinct change in the sound with a much better depth to the sound of the whistling in “The Stranger” as well as more details with the cymbals in the background. I had to see if this was restricted to just use with my phono system so I then moved the RCI-3 from under the phono cable to under the audio cables coming out of the Cd player. I left the other three RCI-3’s in place under the speaker wire and power cable from the power supply box going to the wall outlet. This time I turned to Neil Young’s (Neil Young Greatest Hits) “After The Gold Rush”, a song that was extremely popular in its time and one I still equally enjoy today. I could now hear each piano note with greater clarity and distinction as well as Neil Young’s vocal talent as he sang solo. Also towards the end of the song Bill Peterson’s flugelhorn solo was more pronounced and smoother sounding then it was before. Not to stop here, I decided to mix in the last of the RCI-3 review samples within my review system to bring the total to ten RCI-3’s. Do you need ten RCI-3’s in your audio system? Well no, but then again yes. The more I used the better the distinction between when I had them in and when I did not. A few years ago when my children were teenagers the term, “sweet” was in vogue used to describe something in an extremely positive manor and can be appropriately applied here. Everything that I said about using four RCI-3’s were even more pronounced when using ten. I could definitely live with ten in my audio system and at $150 apiece it brought the total to $1500. Four of course would only be a $600 investment and brought me close enough to the sound of what I had heard with ten pieces for most of us. The law of diminishing returns seemed to be at work here, but if you have the money and desire to effect these changes made with ten RCI-3’s was, “sweet” as my kids used to say. 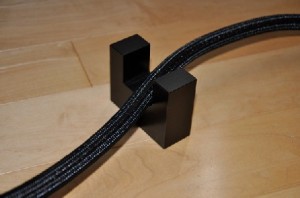 Summing this all up I must say these are two quality products. First there is the REM-8 EMF Canceler which displays its versatility in its ability to move between your audio and video equipment with relative ease. Secondly there is the RCI-3 which can be used not just on speaker cables, but interconnects as well. I used both products together in my system and naturally found them to work well together. A little change here, another there and all of a sudden we have a greater sense of a more realistic presentation than we had before. Asking me which one is more effective is a difficult question to answer as I found both to be useful just with different equipment is all. I did like the RCI-3 though in that it was useful in taking cables off the floor for a neater look as well as causing an effect on the sound. The REM-8 however with its ability to effect change to both audio and video performance was equally impressive. Each product is unique in its own way and one your audiophile friends will have fun playing with and talking about for hours. As for me I am done talking as all I want to do is get back to my review system to enjoy some music with both the RCI’3’s and REM-8’s.

The listening room is 18 foot 8 inches long by 13 feet wide. The room’s cathedral ceiling starts at 8 feet high then slopes upward to 13 feet at its peak in the middle. Flooring is a soft hardwood covering with an oriental rug placed dead center in between (but not under) the listener and the audio system. There are no doors that open or shut into other rooms also there are two large openings one facing the speakers and the other to its side and slightly in front of the right speaker. There are three Acoustic Revive RWL-III Panels, one in the center of the Legacy Speakers and two others one behind each speaker, as an acoustical treatment for my room. As for my audio equipment it is tucked nicely inside of a Cherry Synergy Twin S30 Salamander audio rack.