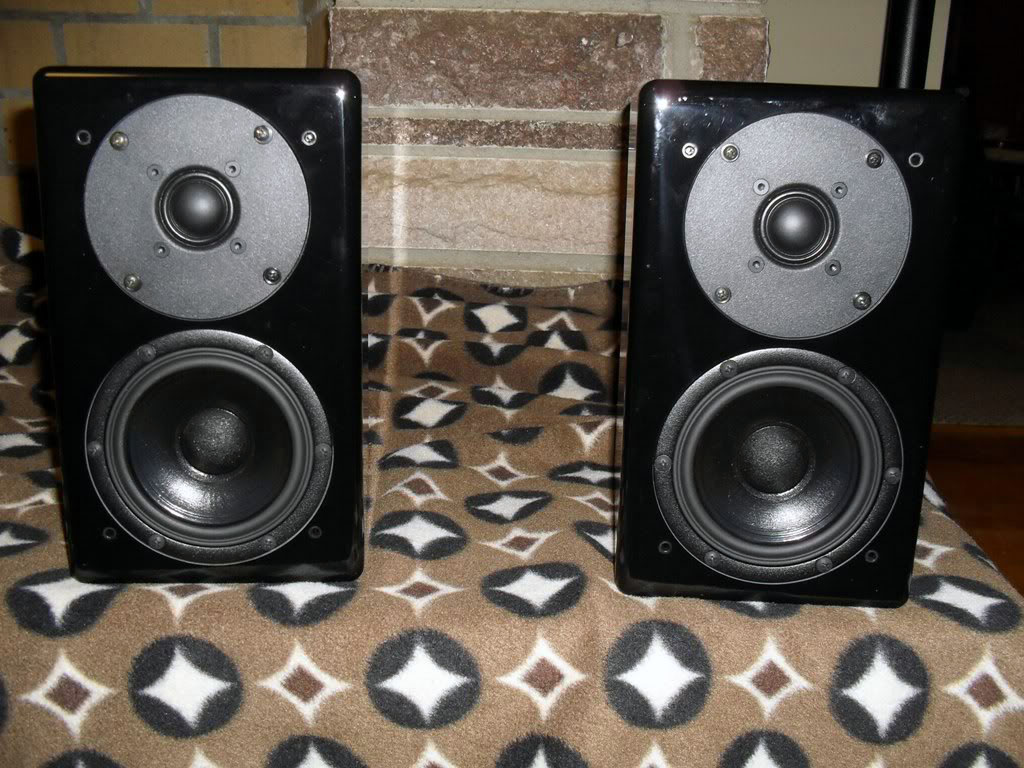 Sometimes I just wish that every manufacturer in audio set their design goal to follow the definition of “seductive”. It’s one of the few words that is a part of the goal of every audio fanatic. We crave hearing the sound that transports us away from the realities of such insanity as the panicked herd mentality now driving Wall Street. As a reviewer, it’s a bit easy to become focused on the minutia and forget about finding the bliss in listening. But every once in a while, a product arrives on my doorstep that forces me to let go and just enjoy. The ACI Emerald XL mini monitors are such a package and belong in Webster’s as an example of seductive.

The Emerald XL’s father is Mike Dzurko, the founder and guru of ACI. One of the great shadowy movers and shakers in speaker design, Mike has in his 31 years produced stunning subwoofers, and the multi award winning Sapphire XL; a monitor that does so many things well that it gets mentioned in the same way as Vandersteens. In the case of the Emerald XL’s, they actually are the fifth version, having taken two years to develop. It fits the famous Orson Wells tag line for Paul Masson wines “We sell no wines before it’s time.” What this should tell any buyer that Mike has created in the Emerald’s is a mini-monitor that needs no apologies for being small. But before I discuss its abilities, let’s focus on the physical.

To look at the Emerald XL’s in a photograph you might be fooled into thinking that all Mike Dzurko did was chop off the rear box of the Sapphire XL’s. Not true, the Emerald’s are a completely fresh design. The tweeter is a 1-inch silk Seas design that performs as smooth as the material that creates its dome. The driver consists of a long throw, 4-inch paper cone with rubber surround. This combination allowed the Emerald’s to easily fill my 14 x 16 foot living room with various singer-songwriters.

Normally, at this size, manufacturers scale down and use only ½ inch thick MDF, not Mike, he sticks with ¾ inch. The additional density I believe adds to the clarity of vocals, and the tight, though limited bass response. The backside does, as expected have a small rear port. Below that sits a metal plate that serves as a base for the crossover on the inside and high quality set of 5-way binding posts. My sample pair of Emerald XL’s came in a gorgeous piano black high gloss, transported in a cloth bag, and accompanied by a pair of fabric gloves. 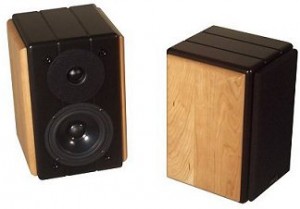 The Emerald’s spent two weeks going thru the break-in process playing throughout the night in my family room to the music of the “Nutcracker”. Once completed I brought them into my main rig consisting of a modified Jolida JD100 cdp, Onix SP3 integrated tube amp, and an Underwood modified PS Audio Trio C-100 integrated chip amp. Placed on top of a pair of sand-filled 24 inch Celestion si stands some two feet out from the back wall, with the upper half of the speaker doubling the distance due to the bay window.

The first couple of listening sessions were spent using the PS Audio chip amp, as I felt that many owners would be using the Emerald’s in a home office setup with space issues. The result was a pleasant, neutral sound. The tube cd player adding a touch of warmth to the presentation, but still it was easy to tell the “chip” sound. My first impression was of tremendous balance, even though at the end of my second session I discovered that the left speaker was actually 4 inches closer to my listening chair. Once corrected, the already solid imaging became downright outstanding.

After a few days of changing volume via the remote, I decided to switch over to the Onix tube amp. After all, a little exercise never hurt any reviewer. I was not prepared for the difference. The only words were seductively stunning! These little black boxes became the recording studio. My wife, who rarely comments on the equipment I review, came in, sat down and listened right next to me. I had just picked up Alison Krauss’ One Thousand Miles: A Collection the day before and had been itching to hear how good the cd was on my rig. This cd in combination with the Emerald XL’s is an excellent match. Tone, something that doesn’t get mentioned enough, is dead-solid perfect. Vocal clarity, something Ms. Krauss is blessed with in spades is reproduced in terrific faithfulness. I’ve listened to the cd some dozen times during the review process with the equipment pairing and I’m still in awe.

But what about other artists? When it comes to both male and female singer-songwriters, the Emerald XL’s are in their element. Acoustic guitars, pianos, small instrument ensembles, the Emerald’s are stunning replicators. When I did hook up the Totem Storm subwoofer, the overall difference in richness wasn’t nearly as noticeable as the bass response. That, to me is a testament to the overall voicing work Mike did with the Emerald’s.

Sooner or later I had to move away from the comfort zone of acoustic rock, jazz and country and into the difficult passages of heavy rock and roll, and of course, classical recordings. Head banging heavy metal fans, you’d be better off looking someplace else to satisfy your thirst of Poison, Metallica. Etc.. The Emerald XL’s just don’t have the size to make you think you’re at an arena. Though in my wife’s small home office, they did try very hard and did give a better effort than the Dreamcatchers mini-monitor I referenced them against. 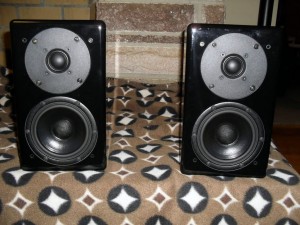 When playing symphonic music, I found movie soundtracks to be quite enjoyable. Alan Silvestri’s “Forrest Gump Suite”, was quite enthralling during all but the most complex of passages. The melody itself is a simple one, and thru the Emerald’s it floats effortlessly even when the entire orchestra is playing. In previous reviews I’ve mentioned John Barry’s Dances With Wolves score for it’s incredibly wide-open presentation that matches the endless Dakota prarie. The Emerald’s couldn’t quite create the forceful impact, but was excellent in instrument placement.

As a comparison I brought out my Totem Dreamcatcher mini-monitors that I’ve had setup in my spare bedroom for a couple of years. Size-wise the Totems are a bit taller. Both use a four-inch driver and the rear port is quite similar in size. At first, I felt that sonically both speakers had many similar qualities. The Dreamcatchers do have more bass, as they come rated down to 56hz versus 70 for the Emerald’s. Typical of Totem, they were also the winner in brightness. With that top end also came a slight hole that the midrange didn’t cover. The Emerald’s had no such empty or thin area. This is where the superb tonal structure of the Emerald’s and rich micro details made them the more pleasing and a richer sounding speaker, and in the end, the one I preferred listening to at every opportunity. The Emerald’s drew me into and surrounded me no matter my mood or level of attention.

As a desktop monitor, they performed flawlessly, but I couldn’t help to shake the thought that the Emerald’s were in some way wasting their talent in a nearfield setup. Mike Dzurko himself stated

“Getting them out away from boundaries yields the most holographic image. However, they are really designed to be placed relatively close to the rear wall to gain some boundary support. They will also do a great job on shelves or wall brackets. These are normally bad placements for speakers, but with the Emerald XL these placements work very well. A great choice for those who might require wall or shelf placement.

They did sound terrific no doubt about it but as Mike mentions, the holographic image the Emerald XL’s create away from walls is truly something special in my living room. They play so much bigger than their size that I cut short their time on either side of the monitor, and moved them to the standard speaker position in the room. The additional space allows the secondary and tertiary sonics to develop. It’s in these little details that the Emerald’s separate themselves from the herd.

My time with the ACI Emerald XL’s has been my favorite with any piece of review gear in a very long time. Many a television show was DVR’ed so I could enjoy what these piano black masters could do with my music collection. I didn’t rifle thru my cd’s looking for music to trip up the Emerald’s, instead I wanted hear what they could do with the widest possible range of songs I had on hand. In a sentence, the Emerald XL’s set an absolutely new standard in their frequency range and price. They may just be the BBC LS3/5A of this decade.

I have a twinge of regret when I send most pieces back to the manufacturer. In the case of the Emerald XL’s it’s a dagger equal to one used for hari-kari. Having a set of mini-monitors this accurate and so tonally dead-on makes them near impossible to box up. Hell, right now I’m looking at things to sell on Craigslist and eBay in order to find a way to keep these appropriately named gems. Hands down, they are that damn good.
Postscript March 31, 2009: I bought the Emerald XL’s, there was no way I could justify sending them back to Mike Dzurko.