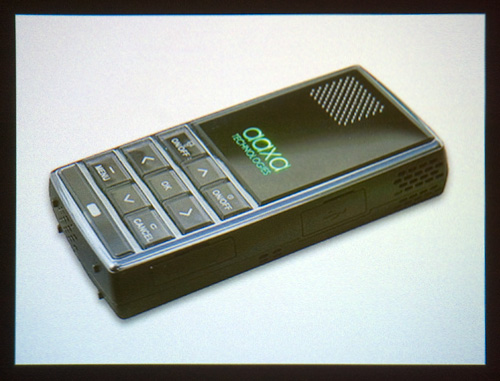 Last year, AAXA Technologies launched the P1 Pico Projector. However, one significant problem with this device is that you were required to focus an image constantly when using it since it is a hand-held LED projector. This problem is the result of light from an LED diffusing rapidly, forcing you to refocus the image from the projector over and over again whenever you change its throw distance. But now AAXA has resolved the problem with their new creation, the L1 Laser Pico Projector.

This projector uses a laser as its light source instead of LED, enabling the image it sends out to remain focused over long distances. Thus, the projector never has to be refocused. The L1 Laser is also smaller and sleeker than the P1 Pico Projector. Furthermore, the new projector features nine clear, plastic control buttons with multiple functions, a blue backlight under each button, UI, a headphone jack, a reset button, a power port, a video in cable port and a USB port and an internal speaker.

The L1 Laser Pico Projector also comes with an attachable plastic bracket adapter, a 2GB LG flash drive and cables for video and audio. The device’s laser light source is 20 lumens with a 800?600 SVGA resolution. This projector supports video, music and photos as well. Like the P1 Pico, it’s also a hand-held device and it’s about the size of a smartphone but it’s thicker and slightly heavier. This laser projector is priced at $599.