There is a saying in Willamette valley of Oregon that fall is great, until mid-October, then the rains come and everyone disappears indoors until spring. During this time over the course of a few weekends I got a wild hair and decided to do a non-shootout comparison between three sets of fine budget monitors I had on hand: The Era Design 5’s, Polk LSi9’s, and the Totem Rainmakers.

One of the things that I wanted to try was getting immediate feedback when listening to all three. So, I crawled up into the rafters and dug out my Adcom GFS-3 speaker selector. Then I rounded up all the 12 gauge wire I had on hand and evened out the lengths. At this point I faced my first obvious variable, I have three sets of stands, each unique, and in three levels of quality: The reference Celestion si stands that are sand-filled. A pair of twin-metal post stands that work in a pinch; and finally, a cheap wooden pair. In order to be fair each speaker would get an opportunity to be heard on all three stands.

Now I can hear some of you already mentioning amplification. Luckily, I have tube, solid-state, and class d chip amp on hand. The source unit was my coveted modified Jolida JD100 cd player. Near the end of the experiment I added in the Totem Storm subwoofer, the Design 5’s and the Rainmakers showed the most improvement in richness and bass response.

With a research project of this type I recognized that multiple days would be needed in order to fairly compare. Mental fatigue is can be a significant issue when doing serious listening. I do my best to limit myself to two hours at a shot. Having the switch box saved a great deal of time as I didn’t need to spend time running back and forth swapping speaker connections.

Of course with any type of comparison a few variables are going to leak thru despite the best efforts of the testor. In this case, speaker placement from the back wall had to be standardized to make the sound wave reflections as even as possible. I settled on 38 inches, with each speaker toed in toward the listening position. A second variable is the sound level, their just is no way to consistently have the same SPL meter reading for all three speakers. Thankfully, the difference wasn’t great enough to make the differences obvious. The loudness level was no more than a decibel between them, enough to notice, but not enough to sway opinion.

Once all the setup points were complete I spent quite a bit of time selecting music that I felt would offer the opportunity for each monitor to show off it’s attributes. I purposefully avoided music that was on my standard demo disk. I wanted fresh references, and though it took a while, the results were worth the time spent. I ended up with two additional demo discs of music, and a temporary respite from my wife’s complaint that I’m listening to the “same old stuff”.

All three monitors: Era’s, Polk’s, and Totems, have their own design style. The Era’s follow the maxim of reproducing the signal without decoration. In other words, no blooming, restraining, exaggerating allowed. The reproduction must be “clean”. In that regard the Era Design 5’s exceed that goal. In flipping between each monitor, it was easy to tell when the Era’s were playing. The complete lack of bloom in the midrange is stunningly different than any other monitor I’ve heard under $2K price. Psycho-acoustically, upon first hearing them one might think they are playing at a lower volume, but the spl meter showed them to be right in line. 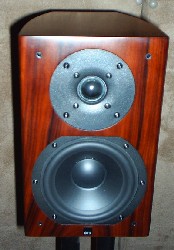 Physically the Design 5’s have the smallest cabinet height-wise, but the teardrop shape produces terrific bases response. The one weakness I noticed was the smaller soundstage, not by much, but it was noticeable. However, in the listening chair it’s a wonderful, precise ride. With it’s consistency across the sound spectrum I enjoyed the match with the class d Underwood modified PS Audio Trio C-100 best. The tube amp just didn’t give off the life I normally expect.

I’ll be honest, I’ve coveted the LSi9’s since I started A$$A, This is partly due to my positive experience with the smaller LSi7’s, and my endearment with the Vifa ring-radiator tweeter. Of the three in the comparison the LSi9’s are the most scientific, with the PowerPort diffuser as an example. The Polk’s are the largest cabinet by far in the group, On first look they appear to be twice the height of the Era’s and twice the depth of the Totems. The size allows for a richer, more resonant sound, but with it comes more effort in finding proper placement in the listening space (at least IMHO).

The LSi series of speakers are well known for having their voicing set at a lower frequency than other speakers in their range. With some music, such as solo singersongwriters the result is quite pleasant. Bass response is the fullest and most detailed of the three, Polk rates the LSi9’s as being able to reach down to 38Hz at -3dB and it does sound as if they do hit that mark. The LSi9’s weakness is their treble, surprising because the Vifa tweeter is so well regarded. But in comparison to the Era and Totem, the LSi9’s sounded overly restrained. After a while I kept thinking that I was definitely missing the secondary elements that make high frequencies so appealing. Of the three amplifiers, the LSi’s had a very slight preference for the 120wpc solid state amp over the tube, but not by much. The class d chip amp just didn’t seem to have the weight to adequately drive the power hungry LSi9’s.

The most traditional of the three as far as design goes. Much of the design and virtually all of voicing is done by ear. Not surprisingly, the Rainmakers have the sweetest sound of the three. Like all Totem speakers, the Rainmakers enjoy showing off the high frequencies. In a listening room made up of hard surfaces throughout a few can find them overly bright. But, in my experience I find the open top end to be very pleasant. The midrange of the Rainmakers are well-known to have a “bloom” to them. This is in the area that Jim Smith, author of Get Better Sound believes a slight boost makes music more involving. My own listening preferences would probably agree with that statement. 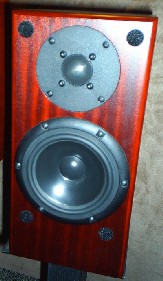 The other area that Totem speakers have continually recognized for is their imaging and soundstage. The rainmakers no matter whether they were on the inside, center or outside stands, gave the widest placement to the different instruments. Bass response did get a bit flabby on the cheap, lightweight wood stands. Contrary, on the Celestions they were both full and detailed, therefore, quality stands are a must. Amplification choice that gives the best presentation is the Onix SP3 integrated. The solid state amp didn’t quite offer the openness, but the Jolida tube cd player kept the sound close. 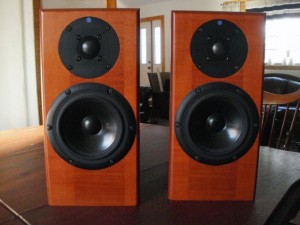 It’s important that I emphasize that I could be perfectly happy with any of these three quality budget monitors. They offer fine dynamics, near full-range sound, and pleasant listening. From now on when I review speakers I will use the Adcom switch box. The immediate comparison capability really allowed me to pinpoint differences much quicker. I consider it to be very important when comparing speakers through traditional brick and mortar shops that you attempt to compare speakers in this fashion. Then follow up in your own listening
room.

I know some of you are asking which monitors did I find I enjoyed the best. Remember, I wasn’t searching for a winner; I was experimenting and learning. With that in mind, in my main rig, and with the way my room is setup having to share the space as a living room, the Totem Rainmakers matched up best. The LSi’s enjoy my solid-state family room rig, and the Era Design 5 have fun in a spare room with the class D chip amp. Life is good and balanced, at least until another fine monitor arrives at my house.