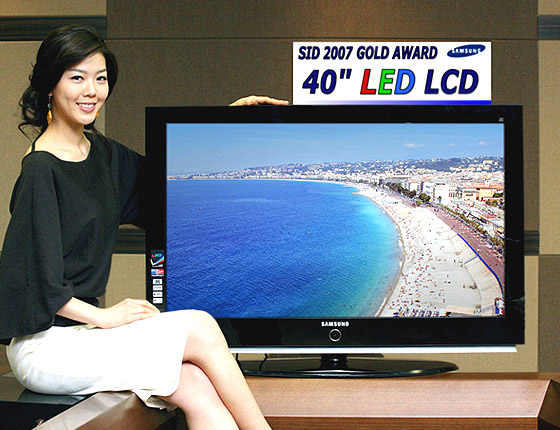 Samsung Electronics Co. is the world’s largest provider of thin-film transistor, liquid crystal display (TFT-LCD) panels. The company recently launched its highly promising 40” LCD TV with LED backlight. The latest model has been awarded this year’s SID Gold Award for Display of the Year. 40” LED-backlit LCD TV delivers a contrast ratio of 10,000:1, approximately five times higher than LCD panels with a CCFL backlight. Another improvement the LCD boasts of is 105% of the NTSC standard Color saturation.

Another product by Samsung is the world’s largest (40 inch) black-and-white e-paper with HD resolution (1,366 X 768 pixels). Special feature of the new display is that it is an EPD (electrophoretic display) that can be used for creating extra-large digital information displays (DIDs). The electrical power consumption of the display is very less and is 300mW at one frame per minute, 1/500 that of a conventional LCD display.