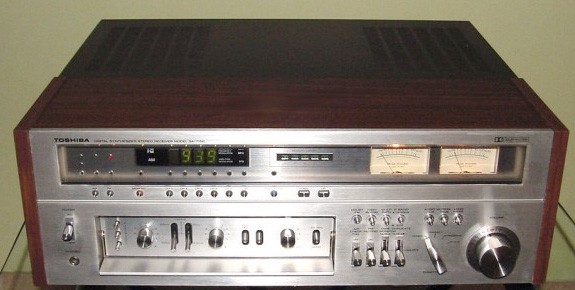 The late 1970’s are remembered by many audio fans as the era of the *Receiver Wars*. All the mainline consumer audio companies engaged in a direct and very fierce competition to offer the biggest, the best, the most powerful, and the prettiest equipment they were capable of producing. They also provided their dealers with beautiful sales brochures for the equipment that extolled the virtues of their efforts. We took those brochures home with us and drooled with desire…..ha!

The result of that competition was that almost every company offered at least some equipment that was exceptionally nice and very well built. Their Top of The Line (TOTL) models were generally very high quality, very powerful, very beautiful, very heavy, and very expensive. A sideline result was that they also produced an extensive array of less expensive middle of the line units that everyday people could afford to purchase.

These were very high build quality compared to equipment produced today for middle income families. Many people of average means could afford those less-than-TOTL models and benefited by enjoying many of the same design features and unit styling of the most expensive units. These were the units that produced the real profits for the audio companies.

Much of that wonderful gear was built like tanks and was extraordinarily beautiful. Unlike many products of today, that equipment lasts an incredibly long time and much of it is still around. There is a large and growing group of people who believe that late 70’s audio equipment was some of the best audio gear ever produced that people of average means could possibly ever hope to afford.

The Internet came and access has become a commodity. eBay came along and provided the vehicle for people to find these items. Possibly the venue provided by eBay, more than anything else, has provided the impetus for the surging popularity of 70’s audio gear.

Pioneer SX-1980 Receiver – One of the very biggest dogs!

Beginning generally about 1981 – 1982, virtually all of the mainline consumer audio companies began a gradual change–call that a decline in my opinion. That change was a little-by-little backing away from the direct competition to produce “The Best”.

It seemed as if they joined forces and began an “almost conspiracy” state of producing equipment for the mass markets. Certainly the bulk of those companies revenues always came from their middle and low line units. The “pull-out-all-stops” TOTL models were designed as status symbols and the very wealthy among us. Certainly the companies lost money producing those.

1979 – 1980 found the world in an economic recession and inflation was generally running at a high rate around the world. And we had President Jimmy Carter telling us that our best days were behind us, it was a new day… a time to conserve and cut back.

I suppose the audio companies decided that it ultimately wasn’t worth their investment to produce the super high quality units that had been their hallmark. Most companies stopped directly challenging each other in direct competition. “Bragging Rights” were downplayed in their advertisements.

For awhile, most of us didn’t notice the major decline in average quality… assuming that the companies were always producing better designs. With years of hindsight, we easily see how wrong our assumptions were.

We eventually came to the current era of what some of us call “The Black Plague”. That is the current situation of black plastic, robot assembled, mass market audio gear with little or no discussion of accurate equipment specifications. This equipment all has a similar basic design.

Hardly any of them have any analog controls of any kind. Often one can’t grab a knob and change the volume, instead having to push buttons that are hard to see and then wait for a change to occur. So you need reading glasses, good lighting and patience to find a particular control. You must wait for “digital” controls to gradually turn up the bass instead of just flipping a knob. What a wonderful improvement in technology… not.

AND… it all looks the same…. no uniqueness. This is very similar to what has happened in the automotive world. As in audio equipment, car designers have come to produce “lookalike” cars. Today, one can stand beside an automobile and not tell who made it. Sameness! What a plague on society! 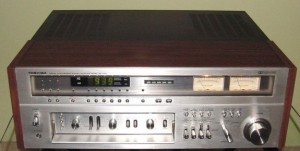 Almost all vehicles today share an egg-shaped design for aerodynamic efficiency but lose their uniqueness and individual beauty. In the 1970’s as a teenager, I could drive at night along the rural roadswhere I lived and tell by the tail lights what kind of car I was approaching. Those days are history!

In the audio world of today, there is certainly little or none of the old “mystique” of 70’s audio. When a unit fails today, most people throw it in the trash and go buy a new one. Sadly, this is all that has been available to purchase for the past many years. I believe that when most 70’s audio equipment failed, people either fixed it or laid it aside saying, “I’ll get this fixed one day.”

Did you ever wonder why people can hardly stand to throw away the equipment that was manufactured in the late 70’s? Is it because the gear is so good looking that it just seems like it should be saved? Is it because you can pick up many of today’s receivers with one hand and even in our modern world people, tend to equate weight with quality. It does take two hands and some arm muscle to pick up a late 70’s unit. Some of the power supplies were as big as a head of cabbage with filter capacitors as big as beer cans?

Perhaps people just inherently value things that appear to be well designed and well built. Who knows for sure? But I believe there is a lot of this gear stuck away in closets that will see the light of day again. Regardless of the reason, it is a fact that the audio gear of those days has an almost mystical influence on some folks.

Often when people see this stuff for the first time, they can hardly resist flipping some switches, pushing some buttons, or giving a quick twist to the analog, weighted, linear, fly-wheel tuner knobs. Man! There is nothing like watching that tuning indicator slide across the dial almost by itself… kind of like magic… ha!

People write to me all the time looking for manuals and tell me about their sudden “new obsession” with 70’s audio. The usual story is that they stumbled upon the stuff while browsing eBay. They were astounded to find the equipment they used to love was still available to purchase.

Another real common story is,

Most tell me they had no idea this equipment was still available and they now plan to put together “Their Dream System” of classic audio gear-sometimes two or three systems.

Several people have written to me asking initial advice about what to look for, how much to pay, etc. after seeing pictures of my Triple Stack *nightlight*. They tell me it inspired them to assemble their own collection. Some even say they use it as backgrounds or screen saver on their computers. Such is the “mystique” of 70’s audio.

One of my “newly addicted friends” tells me about the “Silver-faced Beauties” residing in his Mexican Cherry Red Armoire. I’m having a difficult time getting pictures out of him.

One thing is for sure. There is a vibrant and growing interest in buying, selling and collecting late 70’s vintage audio gear. Perhaps you own some. Perhaps you “wish” you did. Perhaps you better go get some while the getting is still good.